For the past six weeks, the U.S. mainstream news media have been consumed by two stories. 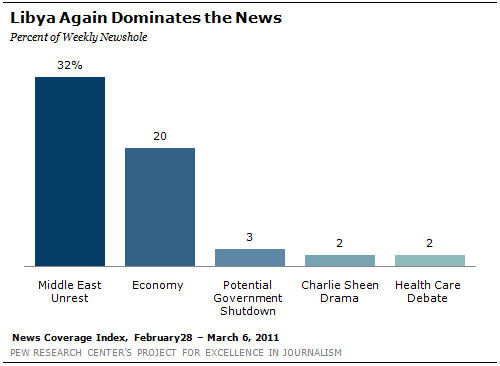 From January 24 (when Egyptian protests erupted) through March 6, Mideast turmoil (34%) and the U.S. economy (18%) have made up more than half of the coverage in the mainstream media studied by the Pew Research Center’s Project for Excellence in Journalism.

During that time, no other subject has filled more than 3% of the newshole, according to PEJ’s News Coverage Index.

The last time we saw two stories command the news agenda for a lengthy period was the eight weeks from September 6, 2010 to October 31, 2010 when the midterm elections filled 28% of the newshole, the economy accounted for another 12% and no other story registered at more than 3%.

Last week, from February 28-March 6, the continuing unrest in the Middle East accounted for nearly a third (32%) of the newshole studied. Almost 90% of that coverage involved the fighting in Libya as forces loyal to Muammar Gaddafi unleashed counterattacks against anti-government rebels. And Gaddafi’s ability to cling to power in the face of widespread resistance became a significant storyline as the media began to address the difficult and potentially divisive issue of whether the U.S. ought to intervene more directly in the fighting.

This marks the fifth time in the past six weeks that the situation in the Mideast has been the No. 1 story.

Economy-related coverage filled 20% of the newshole studied last week. For the third consecutive week, the leading storyline was the standoff between the governor and unions in Wisconsin, although the coverage expanded to look at other states engaged in similar budgetary conflicts. Some good news on the jobs front—the unemployment rate falling under 9%—also generated attention late in the week.

Far behind, the third-biggest story (at 3%) was the matter of a potential federal government shutdown. Last week’s newsmaker was Congress’ decision to pass a two-week funding extension that at least temporarily avoided that shutdown.

The fourth-biggest story involved a celebrity run amok. Attention to actor Charlie Sheen—who last week embarked on an aggressive media tour that seemed to only further raise further doubts about his well-being—accounted for 2% of the newshole

Coverage of the No. 5 story, health care (2%), was driven by President Obama’s offer to allow states to opt out of some provisions of the controversial new health care reform law if they could achieve the desired results on their own—a move that in another time might have been a much bigger story.

The Shifting Storyline in Libya

Two weeks ago, the U.S. media were busy profiling the mercurial Gaddafi while raising doubts about America’s ability to influence the situation inside Libya. Last week, the narrative changed as Gaddafi violently clung to power and the subject of possible U.S. intervention—most notably the establishment of a no-fly zone—became more urgent. 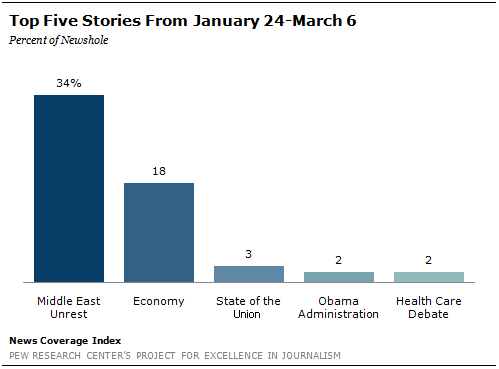 The week began with one signal of growing U.S. involvement, as reported in this February 28  Wall Street Journal story:  “The Pentagon is repositioning warships and planes in the waters off Libya to be ready to enforce a no-fly zone or deliver humanitarian aid, military officials said Monday. By shifting Naval and air forces in the Mediterranean, the U.S. is preparing the groundwork for possible intervention in the civil war that has engulfed Libya.”

A good deal of last week’s coverage focused on a growing discussion about that no-fly zone, which would keep Gaddafi from using air power against opposition forces, but could embroil the U.S. in another military situation. CNN International anchor Michael Holmes expressed some skepticism on March 1, noting that while a no-fly zone “does put pressure on [Gaddafi], it’s a complicated thing to set up…The NATO forces wouldn’t want to do it without a UN resolution, for starters.”

The next day, a story on NPR’s “All Things Considered” noted that Defense Secretary Robert Gates, Secretary of State Hillary Clinton and White House press secretary Jay Carney had all addressed the issue. The report said Gates warned that “any military action against Libya must be weighed carefully because it could have broad consequences,” but also included Carney’s sentiments that “pretty much all options are under review.”

All of this came amid a growing consensus that there will be no quick and easy conclusion to the fighting in Libya—which could conceivably exert additional pressure for outside intervention.

“Gaddafi may prove harder to dislodge than previously thought,” the New York Times reported on March 1. “The regime of the Libyan leader…has been badly undermined, but he retains enough support among critical tribes and institutions, including parts of the army and the air force, to retain power in the capital, Tripoli, for some time to come, say experts on Libya and its military.”

One other aspect of the situation that got media attention last week was the growing humanitarian crisis created by the fighting.

“The violence in Libya was threatening to turn into a humanitarian crisis…as thousands of people fleeing into Tunisia overwhelmed relief efforts, creating a bottleneck of evacuees stranded on the Libyan side of the border,” reported the Washington Post. “U.N. officials moved to erect a tent city to shelter the more than 15,000 people arriving each day, largely Egyptian migrant workers but also Libyans as well as oil workers and menial laborers from Chad, Sudan and nations as distant as Bangladesh and China.”

And late in the week, there was news that the U.S. was helping fly refugees who had fled Libya back to their home countries—perhaps one more signal that a full-blown political and media debate over America’s role in the crisis is in the offing.

The economy was the No. 1 story in one media sector, radio news—at 28% of the airtime studied—thanks in part to the talk show hosts.

The continuing faceoff between Wisconsin Governor Scott Walker and the unions over his efforts to curtail collective bargaining rights was once again a major storyline. And radio talkers argued about whether the governor or the unions were to blame.

On his show, liberal pro-union host Ed Schultz asserted that, “the public is speaking, through all of the polls out there, that the governor is on the wrong side.” But turning to the 14 Democratic Wisconsin state senators who fled the state to prevent a vote on the matter, Schultz also asked: “How long can they hold out?”

Some of the coverage also looked beyond Wisconsin, including a Washington Post article noting that the tactic used by that state’s Democratic senators was being replicated elsewhere.

“The strategy was used to great effect this week, when two Maryland delegates did not show up at a committee meeting about a bill that would legalize same-sex marriage,” the story stated. “And Democrats in Indiana who are upset about a [union] issue also have decamped to Illinois, holing up at a Comfort Suites in Urbana. They work out of the breakfast nook, subsist on Subway sandwiches and donated chili dinners, and make frequent visits to the coin-op laundry.”

Another economic newsmaker last week was some good news on the job front.

“Employers in February hired at the fastest pace in almost a year and the unemployment rate fell to 8.9% — a nearly two-year low,” the AP reported. “Private employers added 222,000 jobs last month…That shows companies are feeling more confident in the economy and about their own financial prospects. And it bolstered hopes that businesses will shift into a more aggressive hiring mode and boost the economic recovery.”

Meanwhile, in Washington, D.C., the biggest domestic story involved the skirmishing over whether to shut down the federal government. Yet that accounted for only about one-seventh the coverage of the economic news. In a classic case of good news equaling no (or little) news, the move to extend government funding for two weeks accounted for only 3% of the week’s coverage. Had a stalemate led to a government shutdown, one can only imagine how big a story that would have been.

One newsmaker who made himself into a big story was troubled ex-sitcom star Charlie Sheen, who, among other things, has lost his job and custody of his children. His eagerness to talk to the media about his situation—often in quasi-incomprehensible language—accounted for 2% of last week’s newshole.  He thus becomes only one of a handful of entertainment celebrities—including Paris Hilton, Anna Nicole Smith and Michael Jackson—to emerge as one of the leading mainstream media stories since in the News Coverage Index began in 2007. However, coverage of the deaths of Smith and Jackson, as well as the subsequent legal battles involved, generated considerably more attention than Sheen’s travails.

The No. 5 story may have gotten lost in the rush of news from Libya and Wisconsin. Obama’s move to allow states to opt out of several provisions on the year-old federal health care law might normally have triggered a robust ideological debate in the two sectors that feature the talk shows—cable and radio. Instead, that story accounted for only 2% of the newshole in cable and 3% in radio. 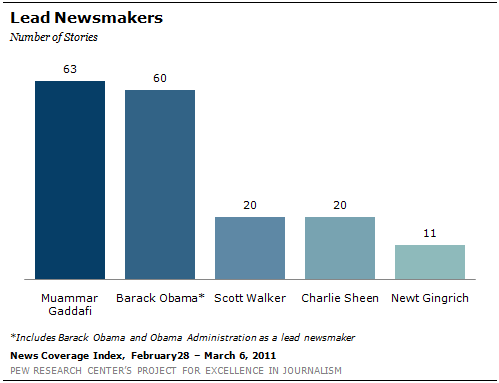 For the second straight week, Muammar Gaddafi was the most prominent person in the news, registering as a dominant newsmaker in 6% of the stories from February 28-March 6.  In doing so, he barely edged out President Obama, also at 6%. Two Mideast figures—Gaddafi and former Egyptian President Hosni Mubarak—have been the top newsmakers in three out of the six weeks that the unrest in the region has been a major story in the U.S. mainstream media.

The ubiquitous Charlie Sheen was next, a prominent newsmaker in 2% of the week’s stories. He was tied with Wisconsin Governor Scott Walker—who also made the list of top newsmakers the previous week.

Death of a Dictator Leads the News