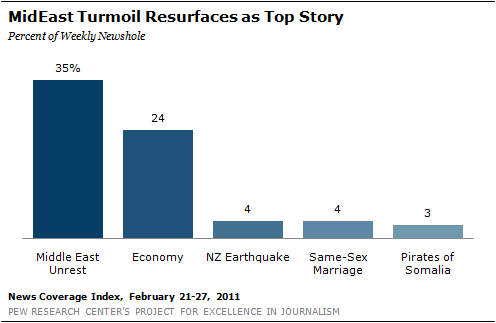 With Libya engulfed in civil war, the continuing turmoil in the Mideast returned to the top of the mainstream news agenda.

From February 21-27, events in the Middle East, dominated by the precarious situation in Libya, accounted for 35% of the newshole, according to the Pew Research Center’s Project for Excellence in Journalism. Up from 22% the previous week, this marks the fourth time in the last five weeks the Mideast has ranked as the No. 1 story in PEJ’s News Coverage Index.

A closely related topic—the rise in oil and gas prices attributed to the Libyan instability—filled another 2% of the newshole.

The oft-heard criticism that an insular U.S. media pay too little attention to international events is belied by the intensity of sustained coverage since protests erupted in Egypt on January 25. In the five weeks from January 24-February 27, unrest in the Mideast has accounted for 35% of the newshole, double that of the next biggest story, the economy, at 17%.

Indeed, the 35% of the newshole devoted to the Mideast in the past five weeks easily exceeds any month of coverage of the Iraq war, the most dominant international story tracked since PEJ began the News Coverage Index in January 2007.

Moreover, the press has followed the current unrest from hot spot to hot spot. Three weeks ago, the situation in Egypt accounted for virtually all of the Mideast coverage. Two weeks ago, after President Hosni Mubarak resigned, media attention to Bahrain spiked, accounting for about one-third of the Mideast coverage. And last week, about 90% of the attention to the region was devoted to the revolt against Libyan strongman Muammar Gaddafi—whose insistence on staying in power appears to be setting up a showdown in the capital of Tripoli.

The week’s No. 2 story was also sizable by traditional standards of the press agenda. The economy filled 24% of the newshole studied. About three-quarters of that was focused on state budget battles, currently playing out most dramatically in Wisconsin, which seemed to portend historic implications about the future of the labor union movement in America.

That economic coverage, however, is down from the previous week when the subject filled 34% of the newshole studied and was divided between two major storylines—the Wisconsin situation and reaction to President Obama’s $3.73 trillion budget. In the most recent week, media attention to the budget debate died down substantially.

With two subjects filling nearly 60% of the airtime on TV and radio and space on front pages and the top of news sites, there was a substantial drop off in coverage to the third-biggest story of last week (4%), the devastating earthquake in Christchurch New Zealand that reportedly killed about 150 people.

There was also perhaps less coverage than there might otherwise have been of the No. 4 story (also 4%), the debate over same-sex marriage. The big newsmaker was the Obama Administration’s decision that it would no longer defend the Defense of Marriage Act in court—a reversal of previous policy.

The fifth-biggest story last week (3%) was a hijacking by Somali pirates that culminated in the deaths of four Americans aboard a yacht.

The Mideast was the No. 1 story last week in three of the five major media sectors, generating the most attention on broadcast network news (39%). And three basic Libya storylines emerged in the media.

One was an attempt to craft a portrait of the 68-year-old Gaddafi, a volatile dictator who in recent years has transformed himself from an enemy of the U.S. to something of an ally of convenience by offering help in the war on terrorism.

The media had a field day with the Wikileaks dump, apparently timed to satisfy the curiosity about Libya. The documents detailed the partying lifestyle of some of Gaddafi’s eight children, including bashes featuring pop stars Mariah Carey, Usher and Beyonce. 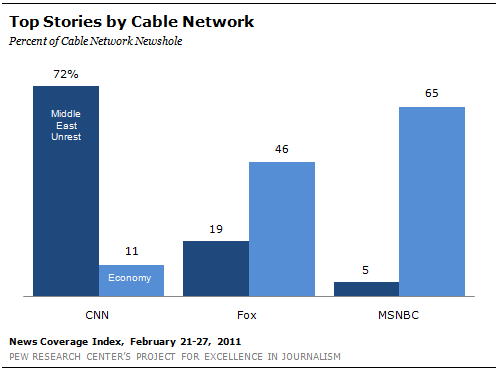 Some press accounts luxuriated in Gaddafi’s mercurial record, which evinced no guiding ideology other than survival. A February 22 profile in the Los Angeles Times reported he “has cast a curious political shadow across North Africa and the Middle East throughout a 41-year rule in which he has veered from terrorist plotter to oil-rich opportunist. Switching over the decades from flowing desert robes to military regalia and a chest full of medals, he has championed nationalism, pan-Arabism, pan-Islamism and Jamahiriya, or a ‘republic ruled by the masses.’ Not known for brevity, Kadafi, now 68, has elaborated his ideologies in circuitous, numbing speeches.”

Another storyline involved an analysis over the role the U.S. should, or could play, in responding to the Libyan situation. And much of the mainstream coverage concluded the White House had limited power to affect events there.

“As Libya’s government brutally cracked down on demonstrators Monday, the Obama administration confronted a cold truth: It had almost none of the leverage it has exercised in recent days to help defuse other crises in the region,” said a February 22 Washington Post story.

Two days later, on ABC’s Good Morning America, correspondent Jake Tapper said the administration was considering enlisting international cooperation on “multi-lateral sanctions” against Gaddafi. But he also reported that the dictator’s unpredictability was causing the White House to keep its words and deeds measured.

“After watching Kadafi’s unhinged rambling speech the other night [in which he talked of dying as a “martyr”] officials became concerned that this was a guy who might…burn the house down with him,” said Tapper. “It’s almost as if President Obama is a law enforcement negotiator talking to a hostage taker.”

But by the weekend, after a boat carrying a reported 167 American citizens safely sailed from Libya, Obama’s language toughened as he called for Gaddafi to step down.

The third major Libyan storyline last week involved the fighting on the ground and the prospects for Gaddafi to stay in power despite losing a large chunk of his country to rebels.

On February 24, CNN host and foreign policy analyst Fareed Zakaria declared: “It seems impossible to imagine that he’s going to be able to survive…The real question, as I’ve always felt, is at some point is somebody in the army or the intelligence service going to turn on him…This could draw on for weeks and weeks, but the outcome is inevitable.”

By the end of the week, it seemed clear that Gaddafi opponents were gearing up to try and drive him from power. “Opposition forces that now control huge swaths of eastern Libya are calling for a fresh push today to oust Col. Moammar Gadhafi from the capital Tripoli and the few towns he still controls around it,” reported a story the AOL News site.

On February 26, the New York Times reported on signs that Gaddafi was losing his grip on power in Tripoli.  An attempt  “to prove that he was firmly in control of Libya appeared to backfire…as foreign journalists he invited to the capital discovered blocks of the city in open defiance of his authority,” the story stated.  “When government-picked drivers escorted journalists on tours of the city on Saturday morning, the extent of the unrest was unmistakable. Workers were still hastily painting over graffiti calling Colonel Qaddafi a “bloodsucker” and demanding his ouster.”

Even though the Mideast was the week’s top story, it is notable that the economy—and particularly the continuing union standoff in Wisconsin—generated the most attention and was the No. 1 subject on cable news, filling 37% of the airtime studied.

Week in and week out, our studies find that the conversation on cable tends to follow the most polarizing domestic issues, particularly on the two channels whose prime-time lineup is filled with ideological hosts. Fitting the pattern, CNN devoted most of its airtime last week to the Mideast, but on Fox and NBC, coverage of Wisconsin dominated.

Some predictable partisan fights occurred on cable. On February 21, conservative Fox News Channel host Bill O’Reilly put the blame directly on unions. Citing a poll showing that more Americans agreed with Walker than the unions, O’Reilly declared that, “The very essence of union-generated benefits is what is bankrupting Wisconsin and other states around the country.”

One night later, on MSNBC, Washington Post columnist Ezra Klein argued that by going after unions, Republicans are shooting for political re-alignment. They see “the opportunity in the large new majorities they have to do more than just balance the budget,” Klein said. “They see an opportunity to reshape the balance of power in the states.”

One unusual media sidebar emerged last week after a staffer at an online outlet recorded a prank phone call to Governor Walker, pretending to be wealthy conservative activist David Koch and discussing anti-union strategy. That earned the paper, the Buffalo Beast, a rebuke from the Society of Professional Journalists. The call was celebrated in some other quarters of the media, however. The media bistro website, called it—perhaps with hyperbolic search engine optimization in mind—the “prank of the century.”

Like many such disasters with potent visuals and strong human interest aspects, the third biggest story of the week, the deadly earthquake in New Zealand, generated the most attention in the broadcast news sector, accounting for 10% of the airtime studied.

Coverage of the same-sex marriage issue, driven by the Obama Administration’s change of heart on its legal strategy, came next, also at 4%. While the move was seen as a victory for gay rights groups and a setback for social conservatives, the issue did not become a major hot button issue last week in the sectors with talk shows—cable (3% of the airtime) and radio (6%). In a less busy news week, it may well have triggered a most robust talk show debate. Some political scientists, citing polling data, believe that it is no longer such a potent wedge issue. Last week, for whatever reasons, it was not major news.

The fifth-biggest story, 3%, was the latest episode involving Somali pirates who killed four Americans aboard a yacht. Some of that coverage focused on trying to reconstruct the sequence of events that quickly turned from negotiations to violence. 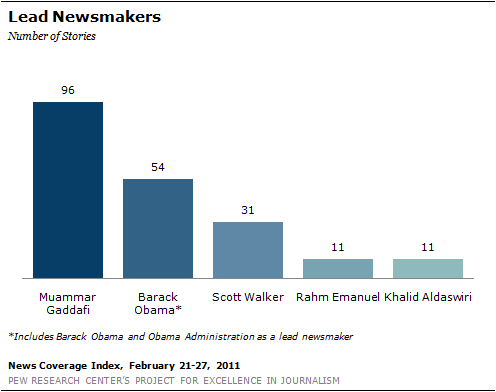 After Gaddafi and Obama, the third-biggest newsmaker of the week was the man at the center of the Wisconsin showdown, Governor Scott Walker, who registered as a dominant newsmaker in 3% of the week’s stories.

The next biggest newsmakers (both at 1%) were former Obama chief of staff Rahm Emanuel, (1%) who was elected mayor of Chicago, and Khalid Aldaswari, a 20-year-old Saudi charged with planning attacks in the U.S.—including one that may have targeted the home of former President George W. Bush.

Death of a Dictator Leads the News