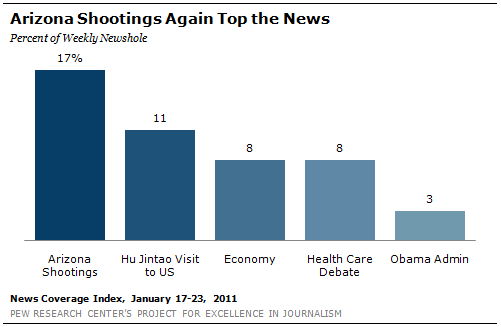 The fallout from the Arizona shooting spree continued to lead the news agenda last week, though the level of coverage dropped significantly and the media narrative narrowed.

From January 17-23, the rampage that killed six and wounded Congresswoman Gabrielle Giffords and 12 others filled 17% of the newshole studied by the Pew Research Center’s Project for Excellence in Journalism. That is down more than two-thirds from the 57% the story generated the previous week when the country was still reeling from the shock of events, according to PEJ’s weekly News Coverage Index.

Even so, that decline in week-to-week coverage was not as large as it has been with some other major news events. The mass shooting that claimed 32 victims at Virginia Tech in April 2007, for example, accounted for 51% of the newshole in the first week and plunged to only 7% the next. One reason the Tucson story may be more lasting is the recovery of Giffords herself. Another may be that the incident has triggered a discussion about the tone of public discourse—a debate political pundits are eager to have.

Last week’s coverage of the Tucson tragedy indeed was focused largely on those two storylines— the Congresswoman’s continuing recovery and the continuing debate over vitriolic rhetoric in public life. That stands in contrast to the previous week (January 10-16) when a series of storylines—ranging from the rhetoric debate and President Obama’s speech to coverage of vigils and the alleged shooter Jared Loughner—all commanded significant  attention.

The week’s No. 4 story, the debate over health care reform (8% of the newshole), also featured a connection to the Tucson saga. As the Republican-controlled House held what appears to be a largely symbolic vote to repeal the Obama-backed law, coverage focused on whether the events in Arizona would soften the tone of debate over the issue.

The second-biggest story last week, at 11%, was the Washington summitry between Obama and Chinese President Hu Jintao. Many of the media post-mortems concluded that the meeting did not produce dramatic breakthroughs but may have helped smooth over rough spots in relations between the two nations.

The No. 3, story, at 8%, was the U.S. economy, a subject that has seen diminished coverage in recent weeks given the media attention devoted to the new Congress and the Giffords shooting. Rounding out the roster of top stories was news of the Obama administration itself (3%), with coverage driven by a recent rise in the president’s job approval ratings.

About three-quarters of last week’s shooting coverage was devoted to just two storylines. The status of Giffords’ recovery filled 38% and the polarized debate over political rhetoric accounted for one-third (33%) of the coverage studied.

For some in the media, there was continued reflection over the burst of initial coverage that in some cases, linked conservative rhetoric to the shootings. In his column, New York Times public editor Arthur Brisbane wrote that, “the intense focus on political conflict—not just by The Times—detracted from what has emerged as the salient story line, that of a mentally ill individual with lawful access to a gun.” Brisbane’s critique was picked up by the Fox News Channel and Sean Hannity.

Sarah Palin continued to be a major newsmaker in the Arizona coverage, this time due largely to a January 17 appearance on Hannity’s Fox News Channel show.  Palin defended her use of the term “blood libel” to describe efforts to link her rhetoric to the violence and declared, “I am not going to sit down and I’m not going to shut up.” She also said she and her children had received death threats themselves.

And in many quarters of the ideological media, the battle over the impact of harsh words continued almost unabated last week, despite Obama’s call for more civility during his January 12 speech.

On MSNBC’s liberal prime-time block, host Chris Matthews criticized conservative language, declaring on January 18 that, “Long before Tucson, we warned about all the loose talk about guns and hatred directed toward public officials… We‘ll show you what we said… and remind all if Jared Loughner didn’t connect the dots between hateful rhetoric and a politician, who’s so sure someone else won’t.” 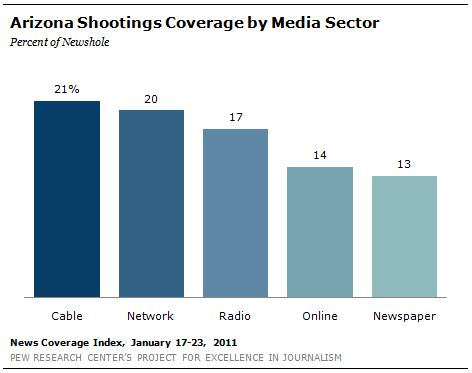 the other side of the ideological spectrum, Fox’s Bill O’Reilly cited the excesses of liberal rhetoric in talking about James Eric Fuller, a man wounded in the January 8 attack who was later arrested for making threats against a tea party official. “Here we have another unintended consequence of the far-left attack machine,” O’Reilly asserted.

The good news last week came on the medical front where the steadily progressing Giffords took a major step forward on January 21, leaving the hospital in Tucson on her way to a rehab hospital in Houston, Texas.

The most dramatic of those words came from Giffords’ husband Mark Kelly. “I’m extremely hopeful that Gabby’s going to make a full recovery," Kelly said, quoted in USA Today on January 21 and throughout much of the media. "I am extremely confident she will be…back at work very soon.”

The state visit of Chinese President Hu Jintao was the No. 2 story last week (11%).  Coverage was remarkably consistent across all five media sectors where it ranged from 9% in network news to 12% on cable news.

Given recent strains in the Sino-U.S. relationship, a substantial portion of the coverage was devoted to summing up both the symbolism and substance of what was accomplished.

“Chinese President Hu Jintao’s just-concluded summit with President Obama was a win both for the Communist Party and for Hu himself,” Washington Post reported the January 21. The meeting sent “a not-so-subtle message that China is now the United States’ equal on the world stage. For the Obama administration, the meeting went smoothly and yielded some progress on difficult issues.”

Next, at 8%, came news about the U.S. economy, which last week focused most prominently on problems facing cash-strapped state governments across the country, a storyline that accounted for about one-third of the overall economic coverage.

Also at 8% was the renewed debate over health care reform, a topic that generated the most attention in the two sectors with political talk shows—cable  (15%) and radio, where it was No. 1, at 18%.  The big newsmaker was the vote—which passed 245-189 along almost strict party lines—to repeal the current health care law. The Republican effort to reverse what they call “Obamacare” is widely seen as legislatively doomed by the Democratic-led Senate and Obama’s veto pen. But last week’s vote, which had been postponed in the wake of the Tucson shootings, was seen as a test of recent calls for more civility in policy debates.

A Los Angeles Times story on the House floor debate last week reported that both sides had indeed taken “pains to control the heated rhetoric that accompanied passage of the law last year.”

The fifth-biggest story, at 3%, focused on the White House and included some good news for Obama—some rising job approval numbers, which reached 54% in a Washington Post/ABC poll released last week.

Last week was a rare one in which the president was not the dominant newsmaker. Instead, recovering Congresswoman Gabrielle Giffords topped the list from January 17-23, appearing as a prominent newsmaker in 9% of all the week’s stories—down slightly from 10% the previous week. Giffords husband, Mark Kelly was the No. 4 newsmaker, registering in 3% of the week’s stories. (To register as a dominant newsmaker, someone must be featured in at least 50% of a story.)

The second-leading newsmaker was President Obama, at 8%, up moderately from 6% the week before. And another world leader and one former leader rounded out the list of top five newsmakers.

The No. 3 newsmaker, at 5%, was Chinese leader Hu Jintao while the fifth-biggest newsmaker (2%) was former Haitian dictator Jean-Claude (“Baby Doc”) Duvalier. A quarter century after he fled that country amid an uprising, Duvalier returned unexpectedly to earthquake-ravaged Haiti on January 16, where he now faces corruption charges.

A Beltway Realignment Tops the News