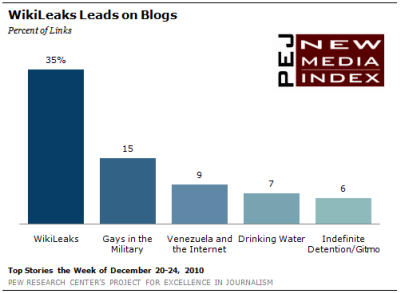 Espousing a unique mix of politics, technology, free speech and transparency, WikiLeaks has captured the attention from bloggers in a way few stories ever do. It has been a focus of social media conversation for three weeks this month alone, with a discussion that moved from one dimension to the next. After centering on political blame, the value of exposing government secrets, and the importance of a free press, the debate took on yet a new angle last week.

For the week of December 20-24, more than a third (35%) of the news links on blogs were about the controversy, making it the No. 1 subject, according to the New Media Index from the Pew Research Center’s Project for Excellence in Journalism.

Most of the conversation last week, however, focused on an investigation launched by the CIA. But rather than discussing the consequences of such an inquiry, bloggers centered on the name of the panel – the WikiLeaks Task Force – which resulted in the acronym WTF – a phrase more commonly known for its usage as part of internet slang.

"And the most aptly named task force ever, award goes to…drum roll please….Wikileaks Task Force a.k.a WTF," joked Word Vomit. "Personally I could care less but how freaking cool would it be to flash a badge and say WTF mate?!"*

"What impact the WTF will have in this very broad debate over Wikileaks remains to be seen," added Drew Wilson at Zero Paid. "In the mean time, I’ll be trying not to laugh every time WTF is brought up for the next little while – a challenging task to say the least."

"I’d imagine the CIA wouldn’t be having so much fun with this issue if their files were caught up in the Wikileaks backwash, but the CIA refused to put its information on SIPRNET and spared itself the damage," wrote Ron Hogan at Popular Fidelity.

Another discussed element this week was the BBC interview with WikiLeaks founder Julian Assange. Most bloggers came to Assange’s defense – criticizing the interview as overly personal and expressing disbelief in the sex crimes accusations Assange is facing.

In previous weeks, the overwhelming position online has been in support of WikiLeaks and notion of transparency. That subtext pervaded last week as well despite the criminal charges facing the controversial figure.

"The interviewer is SO obnoxious you want to knock his block off," complained neufneuf referring to the personal nature of some of the questions asked of Assange.

"In the BBC’s interview with Wikileaks founder Julian Assange, we learn that he’s a martyr, a player, a gentleman, perfectly happy with himself, and oh yes – people associated with Wikileaks have been assassinated. The interviewer doesn’t even blink at that one; no follow-up question," noted Charles Johnson at Little Green Footballs.

While not the major focus for bloggers, some supporters of WikiLeaks expressed their belief that Assange was innocent of the charges.

"It should go without saying that I do not approve of Assange’s behavior if the allegations against him are true. Nevertheless, I still believe the allegations are very convenient for the powers that be," declared Sky Dancing.

"Many people have noted that one can support WikiLeaks as an organization without supporting Assange as an individual, and that’s certainly true," argued The Freedom Bulletin. "But I support both …Although obviously not the most pure and chaste person in the world, he is brave, intelligent, principled, and honorable…and not a rapist."

"Julian Assange of WikiLeaks has my vote for the 2010 Sexiest Man Alive," pronounced Lothlaurien’s Lore. "Because he is a freedom fighter. It doesn’t get any sexier than freedom."

The second largest subject on blogs, with 15% of the links, was the Senate’s passage of a bill to repeal the military’s "don’t ask, don’t tell" policy requiring gay and lesbian troops to conceal their sexual orientation. Bloggers overwhelmingly cheered the action as a positive step against discrimination.

"‘Don’t ask, don’t tell’ has been repealed. It was a long time coming, but it happened!!!" cheered Jennifer at Ooh Fancy That.

"I have long believed that once gays and lesbians are allowed to serve openly and proudly in its armed forces, other types of discrimination against them in the USA will begin to crumble," applauded Donald Philip Walker at exaro. "A nation that revers its men and women in uniform, as does the USA, can hardly then foster or tolerate prejudice against those same men and women."

"Now people of all sexual orientation can serve their Country and those who cannot serve next to fellow gay soldiers can turn in their commission," pronounced Native and Natural Born Citizenship Explored. "Bye bye and good riddance."

While in the small minority, a few online voices opposed the development.

"I’m not celebrating this decision," wrote Shane Vander Hart at Caffeinated Thoughts. "When our men and women are in combat we shouldn’t be treating the military as a social experiment…The fact is the military has discriminated for years. It has to have standards, and no not everybody can or should serve. Congress has harmed military readiness, not helped."

The third largest story, with 9% of the week’s links, was another story featuring free speech online. Venezuelan President Hugo Chavez defended his plans to impose broadcast-like regulations on the internet. Critics charge that the rules will restrict freedoms.

Fourth (at 7%) was a Washington Post article about an environmental study that found the probable carcinogen hexavalent chromium in the drinking water of 31 out of 35 major cities examined.

That was followed by another Washington Post story (at 6%) about the administration’s actions surrounding Guantanamo Bay. According to the report, the Obama administration is preparing an executive order to formalize indefinite detention without trial for some detainees despite previously announced plans to close the military detention center. 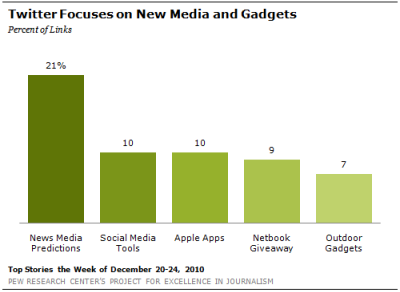 The most linked to subject, with 21% of the news links posted in Tweets, was a column by Mashable writer Vadim Lavrusik predicting 10 major developments in news media for 2011. Among his predictions is the expansion of the "leakification" of journalism following the example of WikiLeaks. He also foresees the death of the "foreign correspondent" and that news organizations will get smarter with social media and tablet devices.

The No. 2 story (at 10%) was a Mashable list of 40 resources available for users of social media. The list includes a wide range of pages from a video on how to use Twitter’s advanced search functions to suggestions for gloves well-suited for users of touch screen gadgets.

Also at 10% were two stories about Apple applications. One was news that the mapping company TomTom released an updated iPhone app where users can make changes to street names and directions, and then share those changes with others. The other story was about the movie ticketing company Fandango’s release of an app that allows iPad users to view trailers and buy tickets from their device.

A CNET giveaway of 5 prototypes of Google’s highly anticipated Chrome OS Netbook even before the product is available for sale was fourth at 9%. That was followed by a Mashable list of rugged gadgets able to survive the rigors of the outdoors at 7%.

The two most viewed news clips on YouTube last week were of the same dramatic and violent event.

On Tuesday, December 14, a school board meeting for the Bay District Schools in Florida was interrupted by a gun wielding man named Clay Duke. After a few tense minutes, Duke was shot by a security official. He then turned the gun on himself and was pronounced dead shortly thereafter.

Despite firing at the board members at close range, Duke did not injure anyone.

The drama of the encounter was caught on live video and available on the internet quickly. (A CNN report about the incident is available here.) A number of television stations showed segments of the video, although networks differed in their treatment of the most violent moments.

A Tax Compromise and a WikiLeaks Controversy Capture Social Media