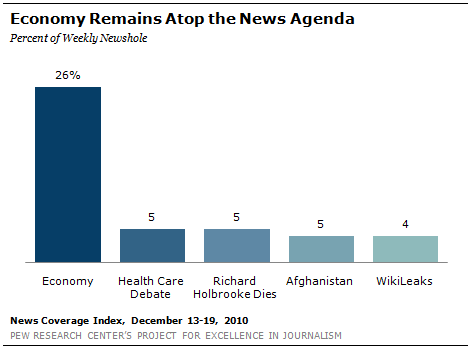 The swift passage and signing of the landmark tax bill drove the economy to the No. 1 spot in the news agenda last week.

From December 12-19, the economy accounted for 26% of the newshole studied in the weekly news index of the Pew Research Center’s Project for Excellence in Journalism. That is somewhat less than the 40% focused on the economy the week before, but is consistent with recent weeks of intense media attention to the subject.

More than any other issue, the tax bill drove last week’s economic coverage, accounting for about two-thirds of it. A mix of other items, including the omnibus spending bill, the debate over earmarks, and news about holiday retail sales, were factors, too.

While the economy overshadowed all other stories, the No. 2 news event, according to PEJ’s weekly News Coverage Index, was a Virginia federal judge’s challenge to the U.S. health care law. For the first time in many months, the debate about health care policy reappeared, accounting for 5% of the newshole.

At No. 3 was the death of Richard Holbrooke, a senior U.S. diplomat who had played a key role in working with leaders in both Afghanistan and Pakistan. Holbrooke’s sudden death from heart problems, and the review of his life as a leading diplomat for Democratic Administrations since the 1960s, filled another 5% of the newshole.

Also at 5% was the U.S. conflict in Afghanistan, spurred in part by a White House report which indicated that troop withdrawals could begin in mid-2011, on schedule.

Finally, at No. 5, was the Wikileaks saga, now in its third week among the top five news stories. This week, journalists reported on the details of the charges and bail hearing for the group’s leader, Julian Assange, who was brought up on charges of sexual misconduct.

The New York Times called it “sweeping.” In the Washington Post, it was “the most significant tax bill in nearly a decade.”

Much of the coverage also depicted the outcome as a potential harbinger of the political deal-making that might now mark the future of the Obama Presidency.

The compromise between the Obama White House and the newly empowered Republican leadership in the House and Senate to extend the Bush era tax cuts across all income groups, including the wealthiest, led all media sectors but one, with newspapers devoting 26% and online news, 20%. Cable news and radio, both home to numerous political talk shows, paid even more attention, at 38% and 35% each. Only in network TV, which focused more on extreme winter weather, was the economy preempted. It filled 12% of that sector’s newshole.

Before last week, the bill itself—which extends the tax breaks for two years—was the subject of intense debate and high emotions on Capitol Hill. But last week, as the Senate then the House passed the bill, and by Friday’s presidential signing, a sense of the inevitable seemed to set in among angry Democrats.

Reporting for the Today Show, NBC News Capitol Hill Correspondent Kelly O’Donnell said on Monday, December 13, that “it now appears that some of the opposition from House liberals who don’t want to see this deal may not be enough to scuttle it.”

That would indeed be the case, as NBC chief White House correspondent Chuck Todd noted Friday, December 17. “They (the Democrats) grumbled behind the scenes, and you certainly had a few members of House progressives get upset publicly, but you didn’t see the leaders coming out and hitting back at the White House. I think they’re realizing they have no choice but to take a back seat.”

Many analysts noted the absence of Democratic House leaders at the bill signing ceremony, as well as Senate minority leader Mitch McConnell’s presence. And some vocal Democratic legislators continued to bemoan the bill.

One of these, New York Rep. Anthony Weiner, told Harry Smith on the CBS Early Show on December 17 that “overall, this was just not a very good deal for the American people, especially for the middle class and those struggling to make it.” He added, somewhat acerbically, “Bipartisanship has to be a means and not an ends, and I’m not sure the president gets that yet, but I’m going to work hard to try and make him a success.” 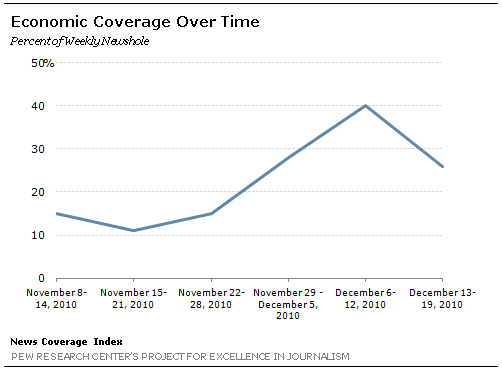 “The general prevailing view is ‘how do we know we couldn’t have gotten a better deal? We didn’t try.’ We just came in and, as I said, it seemed like this thing was negotiated from manila, because there was a lot of folding going on. That is a commonly held view: that the White House has not beaten back very hard.”

But even Carville admitted that Obama had to consider the political realities of the moment. And some conservatives, as in weeks before, spoke in favorable terms about the president, suggesting that he may have emerged the winner after the weeks of arguing, politicking and voting on the tax bill.

Conservative columnist Charles Krauthammer in the Washington Post on December 17 called Obama the “new comeback kid….Obama had a bad November. Self-confessedly shellacked in the midterm election, he fled the scene to Asia and various unsuccessful meetings, only to return to a sad-sack lame-duck Congress with ghostly dozens of defeated Democrats wandering the halls,” said Krauthammer.

“Now, with his stunning tax deal, Obama is back. Holding no high cards, he nonetheless managed to resurface suddenly not just as a player but as orchestrator, dealmaker and central actor in a high $1 trillion drama.”

U.S. healthcare legislation appeared for the first time in months as a top story when a federal judge in Virginia challenged the provision that all Americans are required to obtain health insurance under the Interstate Commerce clause. The last time health care reform achieved that much coverage was the week of March 29-April 4, 2010, the aftermath of the passage of the bill. That week, the subject accounted for 9% of the news, and was the No. 2 story.

Part of the coverage last week was the potential for the law being overturned. It is being challenged in 20 states and many expect it may face a difficult time at the Supreme Court. A foxnews.com story from December 13 called last week’s challenge an “unmistakable and perhaps permanent pockmark on the face of the Obama administration.”

Though he never became Secretary of State or reached a cabinet rank, Richard Holbrooke’s sudden death was a major news event. His obituary appeared atop the Washington Post on December 14, as well as the New York Times, which described Holbrooke’s “distinguished career” and his outsized personality.

“Some called him a bully, and he looked the part: the big chin thrust out, the broad shoulders, the tight smile that might mean anything. To admirers, however, including generations of State Department protégés and the presidents he served, his peacemaking efforts were extraordinary.”

As the U.S. special representative to Afghanistan and Pakistan, Holbrooke’s death—caused by a tear to his aorta—came during a week when that conflict appeared among the top stories in the media, at No. 4. Much of the Afghanistan coverage stemmed from a long-awaited White House report on the troop situation there, which was released on December 16.

Barack Obama, in a statement upon the report’s release, said that enough progress was being made to warrant a withdrawal of U.S. troops on schedule in mid-2011. A Reuters story, published by Yahoo News, noted that the “upbeat public assessment of the war by U.S. military officials and the White House is not shared by America’s intelligence agencies and aid agencies working in Afghanistan.”

Also among the top stories was the Wikileaks trove of classified documents that were made available by the group’s leader, Julian Assange. Coverage last week focused on the proceedings related to Assange’s charges in Sweden. 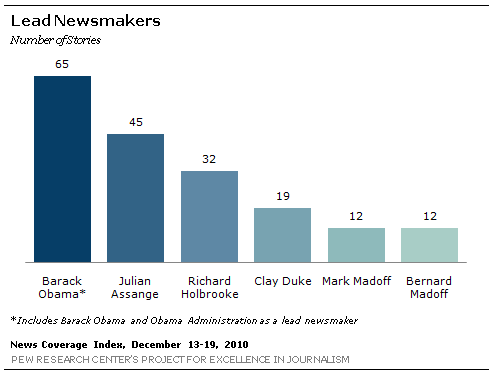 The second most prominent figure in the news last week was Julian Assange, the leader of the Wikileaks organization, who faces criminal charges in Sweden related to alleged sexual coercion of two separate women. He was the lead newsmaker in 4% of all stories last week.

The late diplomat Richard Holbrooke was next, appearing prominently in 3% of all stories last week. Many of the obituaries reflected on the mixed picture of Holbrooke—a supremely talented individual who nevertheless was sometimes hamstrung by his own rough edges.

The No. 4 lead newsmaker last week was Clay Duke, the subject of a harrowing school board meeting standoff in Panama City, Florida. Duke, a “troubled, broke ex-con with bipolar disorder” in the words of the Associated Press, held up the school board on December 14. He fired at, but missed, the board members, before killing himself. The incident was caught on camera by local TV stations, there to report on the board meeting. Graphic video of the incident was posted on the Internet and, in some cases, broadcast on national television. Duke was the subject of 2% of stories last week.

Tied for No. 5 were two members of the Madoff family, Bernard and his son Mark, in another tragic case where suicide made headlines. The younger Madoff was found hanging in his Manhattan apartment on the second anniversary of his father’s arrest for masterminding what is thought to be the largest Ponzi scheme in U.S. history.

With Budget as Backdrop, Economy Leads the News

The Stimulus Debate and Daschle Debacle Dominate the Blogosphere