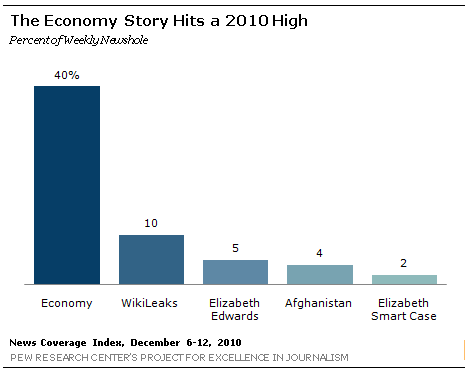 by the Beltway version of a man-bites-dog story—President Obama aligning with Republicans and fighting with Democrats—last week’s tax skirmishing pushed coverage of the U.S. economy to a new high in 2010.

For the week of December 6-12, the story of the economy filled 40% of the newshole, according to the Pew Research Center’s Project for Excellence weekly index of news coverage. That easily surpassed the previous week’s level (28%), which itself represented the most media attention to the topic since March 2009.

Last week’s coverage focused almost entirely on one issue—the deal between Obama and Republicans extending the Bush-era tax cuts—which many analysts viewed as a clear sign that the president was moving to the center after the rebuke delivered in the midterm elections.

Adding fuel to last week’s coverage was the dramatic, if temporary, Washington realignment set in motion by the agreement. While a number of Republicans lauded the deal—which also included an extension of unemployment benefits and several incentives for business—Obama found the liberal wing of his party in open revolt. Those strange politics help explain why ideological radio and cable talk hosts drove coverage last week.

Indeed, the economy, particularly the tax deal, accounted for a whopping 77% of the airtime studied on the cable and radio talk shows.

The No. 2 story, for the second week in a row, was the WikiLeaks saga in the aftermath of its release of sensitive State Department documents, which filled 10% of the newshole. The bulk of the coverage centered on the arrest of WikiLeaks founder Julian Assange on sexual assault charges and the cyber revenge taken by his supporters.

The week’s third biggest story (at 5%), was the death of Elizabeth Edwards. The estranged wife of scandal plagued former senator and presidential candidate John Edwards died very quickly after the sobering news that doctors had advised her to discontinue her treatment for cancer.

Afghanistan, which also accounted for 4% of the newshole, was the fourth biggest story of the week. That was followed, at 2%, by last week’s conviction of Brian David Mitchell for the 2002 kidnapping of Elizabeth Smart in Utah.

“Tonight, dramatic breaking news, a deal brokered by President Obama and the newly empowered Republican congressional leaders,” Jon King declared on his December 6 CNN show. In response to the two-year extension of all of the Bush tax cuts, King reported, Democratic congressional leaders “are not thrilled. Some are angry. Some are frustrated.”

That conflict made the economy the top story in all five sectors studied: network news (25%) newspapers (28%), online (30%), and particularly the two sectors most oriented to political battles. In cable news, it filled 58% of the time studied and on radio, where talk radio hosts fill their time, 67%.

There were several elements to the week’s economic coverage, including news of California’s fiscal crunch and some attention to the job market. But by far the dominant storyline, accoun

ting for more than three-quarters of that coverage, was the tax cut compromise.

The December 7 New York Times reported that “facing a Democratic revolt over his tax accord with Republicans,” Obama  “defended the package…as a ‘good deal for the American people’” saying  that “he had no choice but to compromise if he wanted to help the middle class.”

The political cleavages on Capitol Hill and inside the Democratic Party played out in interesting ways in the neo-partisan media as well. As the story became fodder for the talk shows last week, it became a kind of ideological Sadie Hawkins Day, with traditional Obama foes lauding the president and his normal allies criticizing him.

“Good for President Obama,” declared Bill O’Reilly on his December 7 Fox News Channel program. “He did the right thing for the country by backing away from raising taxes on the affluent and small business owners…But the ideologues on the far left are not interested in any of that.”

Meanwhile, liberal MSNBC host Ed Schultz blasted Obama on December 8. “President Obama needs to break out of his bubble and listen to the people across the country who actually put him in office,” he said. “Democrats do feel betrayed when the Republicans seem to get everything they want…It‘s more of the same, more Bush policies.” 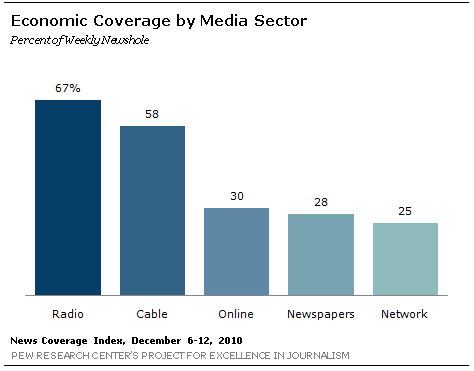 “We’re about to make political history,” Luntz asserted. “I want you to watch the first time that Barack Obama actually does better among Republicans” than Democrats.

That certainly held true for Rachel Maddow, the liberal MSNBC prime-time host, who attacked the White House for its criticism of liberals unhappy with the deal.

“The president today also turned withering fire on liberals, on the Democratic base, for expecting too much,” she stated, arguing that Obama had given up too much. “If you went into these negotiations with Republicans not wanting cheese on the pizza, you ended up ordering extra cheese for the pizza, right?  Extra cheese with a side of cheese and some cheese dipping sauce for the side cheese.”

Some of that heated rhetoric turned into action when House Democrats decided to table the compromise package, leading NBC’s Kelly O’Donnell to state on the December 9 that, “We’ve got a family feud among Democrats.”

By week’s end, the fate of the measure was uncertain although the White House was expressing optimism it would eventually pass, given the politically unappetizing prospect of everyone’s taxes rising next year.

And just as at least some liberal analysts suggested Obama had done reasonably well in the negotiations, one influential conservative commentator made the same point from the opposite perspective.

“Barack Obama won the great tax-cut showdown of 2010—and House Democrats don’t have a clue that he did,” wrote Charles Krauthammer on December 10. By getting agreement on package of about $1 trillion in tax cuts and spending increases, Obama “negotiated the biggest stimulus in American history.”

And in a survey released on December 13, the Pew Research Center for the People & the Press found that 60% of all respondents approved of the tax deal, including 63% of Democrats and 62% of Republicans.

The WikiLeaks episode was the week’s No. 2 story, although at 10%, coverage fell significantly from the previous week (16%). Last week, the story generated the most attention (17% of the newshole) online, a news sector that according to our content analysis, tends to be more oriented than others toward international news.

The most dramatic development was the arrest of the man in charge and very much the public face of WikiLeaks. Julian Assange “who is wanted in Sweden over claims he sexually assaulted two women, was in Wandsworth prison tonight after a judge refused him bail at an extradition hearing in London,” reported a December 7 Guardian story posted on Google News. “The 39-year-old Australian, who denies the allegations, was driven away in a white prison van after an extraordinary one-hour hearing at City of Westminster magistrates court.”

Reaction from Assange’s supporters was swift and potent.

“Supporters of WikiLeaks founder Julian Assange…attacked the websites of Swedish prosecutors, the Swedish lawyer whose clients have accused Mr. Assange of sexual crimes and the Swiss authority that froze his bank account,” stated an Associated Press story. “MasterCard which pulled the plug on its relationship with WikiLeaks on Tuesday, also seemed to be having severe technological problems…The online attacks are part of a wave of online support for WikiLeaks that is sweeping the Internet.”

Even as overall coverage of the WikiLeaks story dropped from the previous week, Assange played a central role in the narrative. Assange, who found himself on the cover of the December 13 Time magazine, was a lead newsmaker in nearly half (45%) of all the WikiLeaks stories from December 6-12. (To register as a lead newsmaker, someone must be featured in at least 50% of a story.)

The death of Elizabeth Edwards, which seemed to surprise the media and political world with its swiftness, generated the most attention on network news, where it accounted for 11% of the airtime studied. The network morning news shows, often focused on personal and human interest topics, were particularly attentive, devoting 16% of their airtime to her passing.

Many of the obituaries portrayed Edwards, 61, as a courageous and formidable woman who had battled her share of adversity. The Washington Post story described her as someone “who captured the nation’s sympathy and admiration for her forthright grace in coping with her struggle with breast cancer and the infidelity of her husband, presidential candidate John Edwards.” 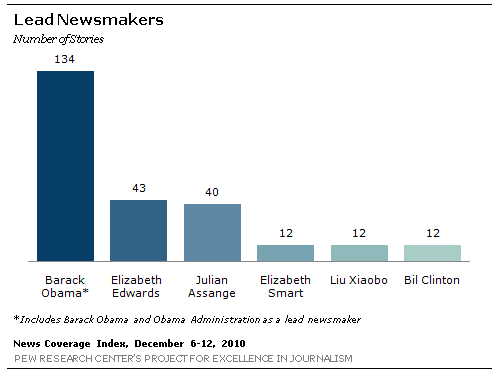 As the central figure in the tax cut drama last week, Barack Obama was the lead newsmaker in 14% of the week’s stories, double the percentage (7%) the previous week. That represents the president’s highest level of coverage in six months, since the week of June 14-20 when he addressed the nation from the Oval Office on the Gulf of Mexico oil spill.

The No. 2 newsmaker (at 4%), was Elizabeth Edwards, followed by Julian Assange, also at 4%.

Three people came next at 1%. They included: Elizabeth Smart, the young woman who saw her kidnapper convicted last week; Bill Clinton who made a highly publicized visit to the White House last week to help  pitch the new tax deal; and Liu Xiaobo, the jailed Chinese dissident who was awarded the Nobel Peace Prize last week.

The man found guilty in the Elizabeth Smart case, Brian David Mitchell, was in the No. 5 slot, also at 1%.