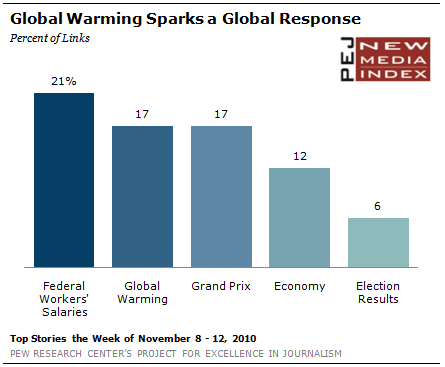 A very familiar topic generated significant attention in the blogosphere last week. But this time, the conversation largely emanated from a different side of the political and policy spectrum.

For the week of November 8-12, 17% of the news links on blogs were about global warming, making it the No. 2 subject, according to the New Media Index from the Pew Research Center’s Project for Excellence in Journalism. This marks the 10th week since the NMI began in January 2009 that the subject has ranked among the top five stories on blogs. In the past, climate change skeptics dominated the discussion. But last week, it was the believers – and they rallied behind news that 700 scientists are about to become more aggressive advocates for that view.

Global warming hit the blogosphere in full force last year, starting with the week of October 12-16, 2009, when bloggers cited the BBC report What Happened to Global Warming? The report, which noted that 1998 was the warmest year recorded globally and that there has been no increase of global temperature since, received fully 50% of the news links that week and even remained a hot topic the following week, as the No. 2 story. Skeptics dominated the conversation again from November 23-27, 2009, with the emergence of the now famous "climate-gate scandal," in which the e-mail system of a prominent climate research unit was breached by hackers. Global warming skeptics took some of the language in the e-mails to imply that the scientists were misleading the public.

The topic made the list again, at No. 2, from November 30-December 4, 2009, after Fox News reported on a United Nations document advocating that global warming become a prominent issue on the world stage. Bloggers seized on that document as evidence of an ulterior motive behind the push to fight climate change.

This year, a BBC interview with Phil Jones, the scientist whose e-mails were uncovered, drew response from bloggers on both sides of the issue weighing in. Then, from the week of March 29-April 2, 2010, global warming skeptics rallied again in response to another BBC interview with a scientist who warned that the planet’s climatic changes were in an unpredictable pattern.

Last week however, supporters of global warming science were out in force to applaud the idea of a more active role for scientists.

"I’m really happy to hear this," wrote Suburban Guerrilla, "Because Democrats can’t quite seem to organize much of anything these days and climate change is too important a cause to leave it to the GOP wolves."

"It’s damn well about time and perhaps way past it," said Chris R. at The Localizer Blog.

"The earth is round and global warming is real," wrote JEL at Capital Green, "one day you’ll believe."

Still, a few global warming skeptics chimed in. "I look forward to the opportunity to debate a scientist from the other side who actually knows what they are talking about," wrote Dr. Roy Spencer, "I’ve gone one-on-one with some speakers who so mangled the consensus explanation of global warming that I had to use up half my speaking time cleaning up the mess they made."

Although global warming and the environment have been significant topics in social media, they have not garnered as much attention in the mainstream media. In a study conducted earlier this year, PEJ found that between January 2009 and January 2010, 4% of the top stories on blogs were about the environment as a whole, while only 2% of the traditional press newshole covered the environment. And so far in 2010, according to PEJ’s News Coverage Index, global warming has made up only 0.3% of the mainstream media newshole.

The No. 1 story on blogs this week (21% of links), was a November 10 USA Today article about federal workers’ salaries increasing tenfold in the past five years and doubling since Obama took office. Most of the bloggers complained that the private sector was funding these high public salaries.

In third place, at 17%, were stories about several Grand Prix races. The next two topics focused on the economy. A mix of stories about the Obama administration and the economy came in with 12% of links, including an op-ed by Federal Reserve chairman Ben Bernanke and Obama’s defense of the Fed’s $600 billion bid to revive the economy.  An op-ed written by Nancy Pelosi that talked about Democratic achievements ranging from Wall Street reform to aiding small businesses came in 5th, with 6% of links.

In both of those economic topics, the majority of bloggers attacked President Obama’s handling of the economy and Pelosi’s recap of her party’s achievements.

Philip DeFranco, a self-made star on YouTube, once again ended up on the list of most popular YouTube news-related videos last week. The Nov. 2 edition of ” target=”_blank” rel=”noopener noreferrer”>The Philip DeFranco Show was the fourth most-viewed video, with 626,695 views.

DeFranco produces several shows on YouTube, ranging from the daily Philip DeFranco Show, where he discusses pop culture and news, to his personal vlog, where he talks about his life. He also has branched out, creating a spinoff show with a different host, Toby Turner, LikeTotallyAwesome that discusses video games, movies and technology and Cute Win Fail, which shows videos of things that are adorable, great or failures.

DeFranco, or sxephil as he is known on YouTube, describes himself as a "6 foot tall 24 year old Italian from Bronx, NY" who wanted to be a doctor when he grew up, but stumbled upon YouTube one day when he was bored.  After discovering he had "a decent ability to convey [his] thoughts" he made his first web videos in September 2006 and gained thousands of viewers on YouTube. In 2008, DeFranco’s fans voted him the Sexiest Geek in a Wired online poll.  And as of November 2010, he had 1.3 million subscribers to his YouTube channel and over 52 million channel views.

DeFranco’s videos are punctuated by frequent jump cuts that make them feel quick. The show features the host talking about things (some of them not particularly sophisticated) that interest him – from the internet to women to politics and even to raising awareness and funds about polycystic kidney disease, which he has. He poses questions to his audience, asking them to respond in video or comment form. Most of the videos run about four or five minutes and seem to be filmed from his home.

The most-viewed video last week (799,788 views) was of a gay, Italian politician, Nichi Vendola, responding to President Silvio Berlusconi who was quoted saying, "it’s better to be passionate about beautiful women than to be gay."

The second video was a skit from the German comedy group Die Aussenseiter, followed by a comedy "news" show from another German group, Hamburger Hanger.

Rounding up the top five was a clip from the Mexican show, Venga la Alegria, discussing a singing competition show. 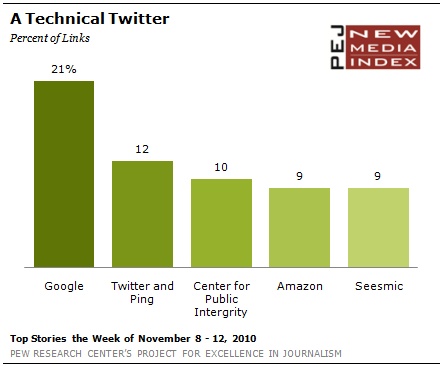 On Twitter last week, as is frequently the case, the top stories reflected the platform’s function as a means of disseminating information about new developments in technology.

The most popular story this week, with 21% of links was about Google.  People reacted to the news that Google was providing its employees with a raise and a $1,000 holiday bonus. Google also announced that it turned off its GMail data feed to sites like Facebook.

Twitter’s integration with Ping, Apple’s iTunes social network, came in second place with 12% of the links. And a story about the Center for Public Integrity’s debut of an HTML5 project that is attempting to bring tablet-style reading to any browser was third with 10% of links.

Two subjects came next, each generating 9% of the links. One was a story about a guidebook to pedophilia that people successfully rallied to get taken off Amazon.com. The other was a Mashable story about the social media platform Seesmic’s changing focus.

Thanks to Carolina Gutierrez and Harriet Guskin for translation assistance.