The final stretch of campaigning before the Nov. 2 elections resulted in the biggest week yet for midterm coverage, with political controversy and turmoil emerging as key themes.

For the week of October 25-31, the midterms accounted for 42% of the newshole, up from 38% the week before, according to the Pew Research Center’s Project for Excellence in Journalism. Coverage of this story almost equaled that of the biggest weekly story of the year, when passage of the health care reform bill filled 45% of the newshole from March 22-28.

Certain aspects of the media’s campaign narrative carried over from previous weeks, including attention to close U.S. Senate races and negative campaign tactics. But also present this week was a focus on specific races where tea party candidates faced potentially damaging controversies. In addition, the coverage homed in on two cases in which Democratic candidates bucked their party leadership.

As evidence of the dominance of the campaign in the news agenda, the No. 2 story for the week (the economy at 6%) accounted for only about one-seventh as much coverage as the midterms. While there was no overriding economic theme last week, the press continued to cover the questionable foreclosure practices that had been exposed around the country.

A thwarted terror plot—interception of Chicago-bound packages containing explosives—was the third-biggest story (at 5%), despite the fact that news broke late in the week, on October 29. The two packages, which were found in the UK and Dubai, were coming from Yemen and targeted for Jewish houses of worship.

After many weeks of negligible coverage, the Gulf oil disaster was once again in the news, this time as the No. 4 story. The media reported on the findings of a federal commission that Halliburton, contracted to work with BP, knew before the explosion that the cement it used to seal the well was inadequate. Coverage of the findings accounted for 3% of the week’s news.

Finally, the war in Afghanistan generated attention (3% of the newshole) when President Hamid Karzai publicly addressed  reports, first published by the New York Times, that his country has been accepting money from Iran.

Once again, the midterm elections topped the news agenda in every media sector studied by PEJ.  True to form, this was especially the case in cable (57%) and radio (56%), two sectors that are home to a number of ideological talk shows.

As the finish line drew near, with a number of races hanging in the balance, the media chose to focus on a few controversial tea party candidates, as well as drama within the Democratic Party, as tensions between candidates and party leadership were exposed.

The Alaska Senate race generated interest thanks to Lisa Murkowski’s resurgence as a write-in candidate (Murkowski lost the Republican primary to tea party-backed Joe Miller). On NBC’s Today Show on October 25, Chief White House correspondent Chuck Todd offered this analysis of the race: “It is fairly fluid, but I can tell you this: there are a lot of Republicans here in Washington that are privately glad that Lisa Murkowski’s bid is going so well, because now, judging by how well Joe Miller’s performed on the trail, there’d have been a big fear that the Democrats might’ve been able to steal this race.”

It became a difficult week for Miller after a judge ordered the release of his personnel file from his days as a local government attorney, revealing that he had been disciplined for an ethics violation. MSNBC’s liberal host Ed Schultz seized on that during his October 27 show to say of Miller, a West Point graduate: “You’d think he’d know right from wrong.”

Both Miller (No. 2) and Murkowski (No. 4) were among the most-covered campaign newsmakers last week—based on the number of election stories in which they appeared as a lead newsmaker.  (To register as a lead newsmaker a person must be featured in at least 50% of the story).

Kentucky GOP senate candidate Rand Paul—another tea party endorsee—became enmeshed in controversy when one of his supporters stomped on the head of a member of the liberal activist group, MoveOn.org outside a debate. The response from the left was swift—such as the Huffington Post’s carriage of the incident on video—and aggressive, such as the ad by Paul’s opponent, Democrat Jack Conway, that made extensive use of the footage.

The Paul campaign immediately condemned the incident and cut ties with Tim Proffitt, the individual charged in connection with the incident

The media did not neglect the headaches for Democrats, either. Rhode Island’s Democratic candidate for governor, Frank Caprio, made headlines when he said on a radio show  that President Obama can “take his endorsement and really shove it” after he learned that  Obama would not be endorsing anyone in the race.

In another case of internal tensions within the Democratic Party, Florida Democratic senate candidate Kendrick Meek publicly rebuffed former President Bill Clinton’s request that he drop out of the race. On October 28, Politico reported that Meek had agreed to exit the race and throw his support behind independent candidate, Governor Charlie Crist in the effort to defeat tea party candidate Marco Rubio, but changed his mind. Politico described Meek as a “staunch Clinton ally.”

On the October 29 broadcast of CBS’s Early Show, Meek denied, in an interview, ever having agreed to drop out of the race. “Ever since I won the primary,” said Meek, “the Crist campaign has been trying to get me out of this race.”

Meek was the No. 3 campaign newsmaker last week, just behind Joe Miller.

The economic news of the week was a mixture of several themes which accounted for 6% of the newshole.

The media continued to follow the foreclosures debacle, as Federal Reserve Chairman Ben Bernanke announced an investigation into whether mortgage companies cut corners. Other news reports illustrated various aspects of “the new normal” in the American economy including people postponing retirement and spending less.

The No. 3 story appeared late in the week, when officials located two packages on cargo planes  containing explosives that were bound for the U.S. President Obama made the announcement on October 29, stating that the investigation found that the packages were addressed to Chicago synagogues, and that they were believed to have been sent by al-Qaeda. Coverage of the discovery, though late in the week, still managed to fill 5% of the newshole.

News about the Gulf of Mexico oil disaster (at 3% of the newshole) reappeared among the top stories after a long hiatus. A federal commission investigating the spill found that Halliburton, which contracted with BP, knew about weaknesses in the cement used to stabilize the well weeks before it exploded, but took no action. News about the revelation drove the spill to the ranks of the top five stories for the first time in nearly three months. The last time the subject ranked among the five leading stories was the week of August 9-15, when a storm delayed efforts to finish drilling a relief well.

Finally, a New York Times report that Afghanistan President Hamid Karzai receives money from Iran drove coverage of the No. 5 topic, the war in Afghanistan. Karzai held a press conference in which he sought to play down the significance of the cash, saying that the U.S. knew about it as far back as 2002, and that his country accepts money from a number of sources, including the U.S. Afghanistan news accounted for 3% of the coverage last week. 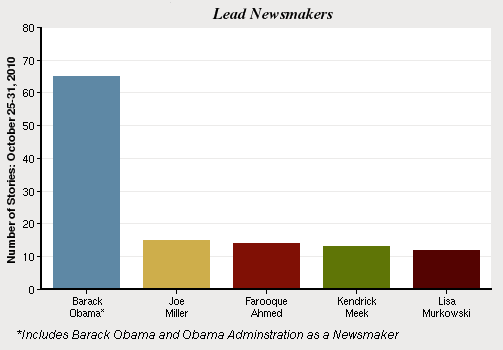 As is usually the case, President Barack Obama was the top newsmaker from October 25-31, registering prominently in 7% of all the week’s stories. Obama’s attempts—including some campaigning and an appearance on the Comedy Central program The Daily Show—to support his party in the midterms focused some of the media’s attention on him, including questions of whether his support is helping Democratic candidates. (The Rhode Island governor’s race is a case in point.)

Three midterm candidates were among the top overall newsmakers last week, another indication of how much attention the media are paying to the elections. One of these was Alaska Republican senate candidate Joe Miller (No. 2, at 2% of all stories). At No. 4 was Florida Democratic senate candidate Kendrick Meek (1%). At No. 5 was Miller’s opponent Lisa Murkowski, the Republican write-in (1%).

The No. 3 newsmaker of the week was Farooque Ahmed (also 1%), who was arrested on charges that he was part of a scheme to set off bombs in the Washington, D.C. Metro system.