After a brief absence, the Gulf oil spill returned to the top of the news agenda last week. But the level of recent coverage suggests that the story that has dominated the mainstream media for more than two months is finally losing some steam.

Fueled partly by concerns about the impact of Hurricane Alex on the cleanup, the environmental disaster was the No. 1 story filling 15% of the newshole from June 28-July 4. That is down from 23% the previous week, when the subject was the No. 2 story, narrowly trailing the General McChrystal /Afghanistan saga. The week before that (June 14-20)  the spill accounted for 44% of the newshole.

Thus, the level of coverage has dropped by about two-thirds in the past several weeks. The once-hot political narrative—the performance of the Obama White House in the crisis—has diminished. And while other developments could produce a spike in coverage, the relief well that may provide a breakthrough in  containment is not expected to be ready until August.

Two other subjects in the news vied with the spill for attention.

The No. 2 story, at 13%, was the U.S. economy, which reached its highest level of coverage since the week of May 3-9 (also 13%). Much of last week’s news was gloomy as new data cast further doubts on the strength and staying power of the modest recovery to date.

Next, at 11% were the hearings for Supreme Court nominee Elena Kagan. While still the third-biggest story last week, this is just half the coverage devoted to the Sotomayor proceedings (22%) during the week of July 13-19, 2009. Indeed, one narrative thread in the Kagan hearings has been their largely drama-free nature, which can also mean fewer headlines.

The fourth-biggest story was a throwback to the Cold War. The June 27 arrests of 10 people in the U.S. accused of being part of a Russian spy ring filled 8% of the newshole. One of those arrested, 28-year-old Anna Chapman (aka Anya Kushchenko), spiced up the coverage considerably with news accounts calling her “the bombshell of the bunch” and the “tale’s sexy antagonist” and the “flame-haired Russian stunner.”

The No. 5 story, (Afghanistan, also at 5%) highlighted the lack of consistent coverage of the nation’s longest war. Just one week earlier, Afghanistan had accounted for 25% of the newshole when the removal of commander Stanley McChrystal served to rivet, albeit temporarily, the news media. But last week, with the Beltway intrigue surrounding Obama’s decision to replace McChrystal with General David Petraeus resolved, coverage plunged by 80%.

At 15% of the newshole last week, the environmental disaster in the Gulf generated its lowest level of coverage since the week of April 19-25 (5%) when the oil rig had just exploded and the true dimensions of the crisis were not known. And the significant drop in coverage—from 44% the week of June 14-20—suggests that barring new dramatic developments, media interest in the story may be flagging after a long run of major coverage. Last week, as has often been the case in the past two months, the spill was first and foremost a television story, finishing as the No. 1 topic in two sectors—cable news (26%) and network news (23%).

The cleanup, containment and impact of the spill was the biggest storyline last week, accounting for almost half the coverage as the media reported on, among other things, a rough tourist season in the Gulf. But the next biggest theme—at about one-fifth of the coverage—was the potential threat posed by Hurricane Alex, which made landfall west of the affected area.

“The Louisiana bayou…is nowhere near Hurricane Alex and yet, with the Gulf full of crude oil, the cleanup effort is already getting hurt by the storm,” noted NBC anchor Brian Williams on the June 30 newscast. “They are in for days of rough seas, high tides, high winds…”

The subject of BP’s role and culpability in the disaster accounted for about one-fifth of the coverage, although that is down somewhat from the attention to that storyline in recent weeks. Anderson Cooper’s June 29 CNN program focused on another criticism of the oil company—its use of so-called reporters (who are company employees) to produce more positive reports on the situation in the Gulf.

On Cooper’s show, CNN contributor and Washington Post media critic Howard Kurtz took BP to task, asserting that that, “There isn’t one person in America who is going to be fooled by this propaganda campaign. The reporting has been so positive, that you would think that they were on BP’s payroll. Oh, that’s right; they are on BP’s payroll. Maybe that explains it.”

The condition of the U.S. economy was the No. 1 story in two sectors last week, radio news (23%) and newspapers (11%) as the employment situation was the top storyline followed by fears of another recession.

And the news was anything but cheerful as evidence mounted that the already tepid recovery might be slowing further.

“Fears that the economic recovery is fizzling grew Thursday after the government and private sector issued weak reports on a number of fronts,” reported an AP story. “Unemployment claims are up, home sales are plunging without government incentives and manufacturing growth is slowing.”

“The United States added just 83,000 private-sector jobs in June, a dishearteningly low number that could add to the growing number of economists who warn that the economic recovery has slowed to the point that it cannot generate enough job growth,” the story said.  “Over all, the nation lost 125,000 jobs [as] most of the lost jobs came as temporary workers hired by the federal government for the 2010 Census exited their jobs. The unemployment rate, based on a different survey, declined to 9.5 percent in June from the previous 9.7 percent. This decline came only because the nation’s labor force shrank by 652,000 jobs, as many people stopped looking for work.”

The hearings for Supreme Court nominee Elena Kagan represented the No. 1 story in one media sector last week, online news at 14%.  And the coverage reveals that Obama’s second Supreme Court nomination was not deemed as newsworthy as his first when Sonia Sotomayor’s Latina heritage and question about how that might affect her decisions fueled the media narrative.  Not only did the Kagan hearings generate only half as much coverage of the Sotomayor hearings, but the announcement of her nomination also generated far less attention (13% the week of May 10-16, 2010) than Obama’s decision to name Sotomayor (24% the week of May 25-31, 2009). 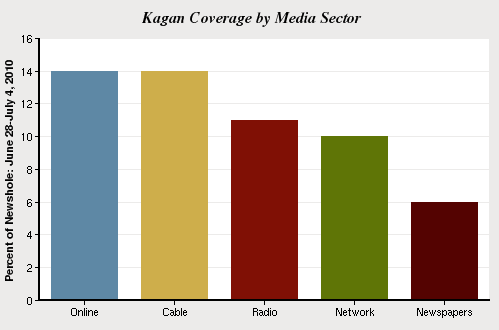 Indeed, there was little inherent drama and even fewer fireworks in last week’s proceedings.

The next day, a Los Angeles Times account concluded that, “After completing two days of testimony before the Senate Judiciary Committee that was alert, thoughtful, and punctuated with flashes of wit, Elena Kagan now seems almost certain to become the nation’s 112th justice on the Supreme Court.”

The story also made note of “one minor slip,” when Kagan answered a question about whether the government could pass a law forcing people to eat fruits and vegetables with a “windy, contextual, cautious analysis,” that made her seem somewhat out of touch.

A classic breaking news story, the crackdown on the alleged Russian spy ring, was the week’s fourth-biggest subject at 8% of the newshole. It generated the most coverage in the more internationally-oriented online sector, at 11% of the newshole. A good deal of the coverage focused on whether the incident would prove to be a setback in what appears to be warming U.S.-Russia relations. And the arrest of attractive 28-year-old Anna Chapman, reported to enjoy the New York club scene, proved to be irresistible media fodder, particularly for the tabloids.  The New York Post went with a photo of a largely undraped Chapman (reportedly provided by an ex-husband) above the headline “From Russia with Love.”

And while media’s attention to Afghanistan fell dramatically this past week (5% vs. 25 % a week earlier), it still claimed the fifth spot.  Most of the coverage was Washington-focused with the easy Senate confirmation of General Petraeus to succeed General McChrystal as top U.S. commander in Afghanistan. The news from the battlefield was that June—when the death toll for the U.S. and its allies surpassed 100—was the deadliest month in the nearly nine year-old war. 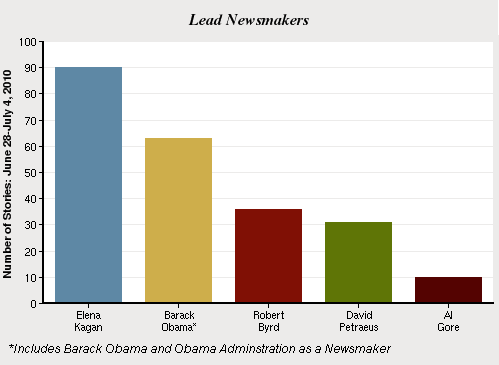 As she went before the senators who will vote on her nomination, Elena Kagan proved to be the week’s top news figure, President Obama and his administration came next, a lead newsmaker in 6% of the week’s stories—down significantly from 13% the previous week when his decision to remove General McChrystal as top commander in Afghanistan was at the center of the news agenda.

The No. 3 newsmaker was Virginia Democrat Robert Byrd (at 4%) who died last week at age 92 following the longest tenure in U.S. Senate history. He was followed by McChrystal’s replacement, General David Petraeus (also at 3%), who formally took command in the war zone last week.

The No. 5 newsmaker (at 1%) was former Vice-President Al Gore after the news last week that the Portland Oregon Police Department was  re-opening a 2006 case stemming from allegations that Gore engaged in sexual misconduct with a masseuse.