With oil still gushing and criticism mounting, the runaway deep-sea well in the Gulf of Mexico topped the mainstream news agenda last week for the fifth consecutive time—making it one of the biggest stories of the year so far.

The subject accounted for 34% of the newshole from June 7-13, according to the Pew Research Center’s Project for Excellence in Journalism. Although coverage has decreased slightly each of the past two weeks, the spill has become the first story in 14 months to command at least 30% of the newshole for three consecutive weeks. (The economy, driven by the debate over the stimulus package, did so for nine weeks in 2009, from late January through late March.)

Last week, the narrative appeared to be shifting somewhat. While efforts to contain and clean the spill still led the coverage—as they have in recent weeks—questions about the effectiveness of the response by well-owner BP and the government gained a larger share of attention. And commentators on both the left and the right stepped up criticism of President Obama’s leadership in the crisis.

In recent weeks, the spill has become a dominant topic on cable news and from June 7-13, the cable outlets devoted more than 60% of the airtime studied to that subject—by far the most of any media sector. Much of that coverage was fuelled by a discussion of growing dissatisfaction with the efforts of Obama and BP.

Overall, last week’s mid-term primaries—the biggest day of voting until the November main event—accounted for 12% of the newshole, making it the second-biggest story. Coverage focused on several women candidates who won nominations to key offices, such as the gubernatorial races in California and South Carolina. Many media outlets, looking for an overarching theme, dubbed it “Ladies Night.”

The economy was the No. 3 story last week, but for the third week in a row it accounted for a relatively modest 6% of the newshole. With public anger about the federal budget deficit growing almost as quickly as the red ink, Democrats last week pared their latest jobs bill to save money. Also, Federal Reserve chairman Ben Bernanke pronounced the deficits “unsustainable.”

The war in Afghanistan came in at No. 4, accounting for 4% of the coverage. It was a particularly bloody week in the war as a suicide bomber hit a wedding—killing more than 40—and NATO forces took more casualties.

Rounding out the top stories (No. 5 at 3%) were developments in the 2005 disappearance of Natalee Holloway, an Alabama woman who went missing while on a high-school graduation trip to Aruba. A long-time suspect in her killing, Joran van der Sloot, was arrested in another killing in Peru and police say he told them he knows where her body is.

At 34% of the newshole last week, coverage of the Gulf spill dropped off only marginally from the two previous weeks (35% and 38%). The story topped all media sectors except radio, where it was eclipsed by last week’s primary elections.

And in 2010 to date, the environmental disaster has become the No 3 story overall, trailing only the economy and health care. 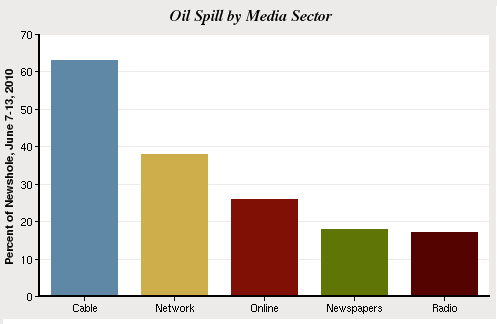 There was a discernable shift in the coverage last week as oil began to wash up on the shores of more states, forcing the shutdown of more fishing grounds. Slightly more than half the media coverage still pertained to the impact of the spill and efforts to contain and clean it up. But a growing percentage of the coverage—more than 40%—was devoted to questions about BP’s responsibility and the federal government’s response.

BP reported progress last week in capturing oil escaping from its disabled well on the bottom of the gulf, providing a glimmer of hope. But those hopes were quickly dashed as new estimates came out that suggested far more oil has been spilled than previously thought, heightening worries about the impact on the environment and economies of the gulf states. And the anger at BP seemed to increase from a number of quarters.

CNN’s Anderson Cooper, for example, chastised the oil company for what he said was a failure to level with Americans about the magnitude of the disaster. He cited faulty estimates of the oil flow as well as the reluctance of the British company to release video of the underwater gusher and its efforts to thwart media coverage.

“We have not been getting the real story—the truth—from Day 1,” Cooper said on June 9 while on location on the Louisiana coast. “Today BP is saying the cap at the cut riser pipe is capturing 15,000 barrels a day. They have never even admitted that 15,000 barrels were coming out of the leak.”

During an appearance on Keith Olbermann’s MSNBC Countdown program on June 7, Newsweek senior White House correspondent Howard Fineman also took the president to task for his handling of the crisis.

“I think he doesn’t fully understand just how deep and widespread that rage is. It’s bipartisan, it’s coast to coast,” Fineman said. “Barack Obama seems sometimes to act like he is in a courtroom dealing with a reasonable witness.

During an June 9 appearance on the Sean Hannity show on Fox, former GOP presidential candidate Mitt Romney added his voice to the criticism saying, “At a time like this what politicians try to do is find a scapegoat…this president has been looking for people to blame instead of taking responsibility for leading the way to get this spill capped.”

The coverage took on an international aspect, too, as some British leaders came to the defense of BP, one of that nation’s industrial giants whose stock is widely held in pension funds.

In the biggest day of voting before the November mid-term elections, 12 states nominated candidates for a host of state and federal offices last week. The June 8 elections were the second biggest story of the week, accounting for 12% of the newshole, but led in only one sector, radio (at 23% of the airtime studied). The previous big set of primaries on May 18 saw the ouster of some big-name politicians such as Pennsylvania’s Sen. Arlen Specter and accounted for 18% of the newshole from May 17-23.

But, in contrast to that balloting, there seemed to be few clear narratives to explain last week’s results. Even Arkansas Sen. Blanche Lincoln, considered among the most vulnerable of incumbents, managed to defeat a well-funded challenger to stay on the ballot as a Democrat.

As the Washington Post reported on June 9, “She was one of several women from both parties to emerge victorious on a ‘Super Duper Tuesday’ of primaries that included gains by ‘tea party’ candidates in some states but also survival of incumbents in others, and that overall did not provide a uniform storyline about the nation’s political mood.”

In California, voters nominated two businesswomen to represent Republicans in a pair of key races. Former eBay CEO Meg Whitman will face off against former governor Jerry Brown Jr. to succeed Governor Arnold Schwarzenegger. And former Hewlett-Packard CEO Carly Fiorina will try to take the Senate seat of Barbara Boxer. Sharron Angle, a former Nevada lawmaker who was backed by the tea party, won the nomination to take on Senate Majority Leader Harry M. Reid. And in South Carolina, State Representative Nikki Haley came in first in the GOP primary to run for governor, though she failed to avoid a runoff with the second-place finisher.

CBS correspondent Whit Johnson, reporting on the results the next morning for the CBS Early Show, said “It was the biggest election day of the year heading into November, it came with a few surprises, but the biggest story was ‘ladies night.’

Subsequent stories during the week included a widely reported open-mike incident when Fiorina was caught belittling her opponent’s hairstyle. There were also a number of stories that speculated that Reid may have dodged a bullet because Angle was a politically weaker candidate than some of her primary opponents would have been.

Budget Worries, Battle Deaths and the Rest of the News

Coverage of the third-biggest story last week, the economy (6%), was driven in part by concerns about a “double dip” recession as data revealed an uneven view of the recovery. Stocks gyrated and retail sales fell. But new claims for unemployment and foreclosure filings were also down.

In a June 9 story on the latest report from the Federal Reserve Bank, USAToday.com captured the ambiguity: “In the new survey, manufacturing picked up, retail sales grew, tourism improved and housing was helped by the now-expired tax credit for homebuyers. But commercial real estate is weak and labor market conditions improved only ‘slightly.’"

Meanwhile, the war in Afghanistan (4% of the newshole) passed a number of grim milestones. On June 7, seven American servicemen were killed, the most in a single day this year in a war now recognized as America’s longest.

In Peru, police reported a break in a cold case that accounted for 3% of the newshole. Natalee Holloway hasn’t been seen since 2005 when she disappeared on a trip to Aruba. The story of her disappearance was the focus of intense media attention at the time and last week a suspect in that case reportedly confessed to an unrelated killing in Peru. Police there said the accused, a 22-year-old Dutch man named Joran van der Sloot, told them he knew where Holloway’s body was. 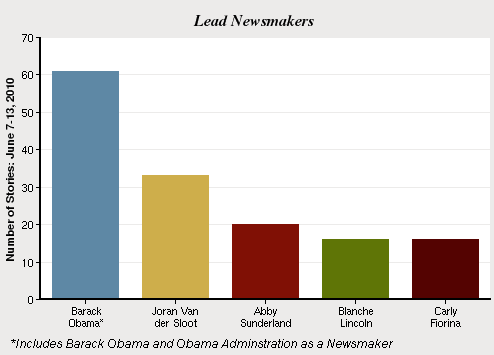 President Obama was once again the top newsmaker from June 7-13, finishing as the lead newsmaker in 6% of the stories, although that was down from 9% the week before. (To be a lead newsmaker, a figure must appear in at least half of a story).

Coming in at No. 2 was Joran Van der Sloot (3%), the suspect in the killing of Natalee Holloway. It was the second week in a row he has been among the top newsmakers.

The rescue at sea of 16-year-old Abby Sunderland (2%), during her attempt to become the youngest sailor to circle the globe, made her the week’s No. 3 newsmaker

A pair of winning politicians came in fourth and fifth: Arkansas Sen. Blanche Lincoln (2%), who beat back a labor-backed challenger to win the Democratic nomination for the Senate, and Carly Fiorina (also at 2%) who won the right to take on incumbent Democratic Sen. Barbara Boxer in California.