For the first time in over a month, the American health care system did not dominate the week’s news.

Instead, coverage of the U.S. economy, fueled by an encouraging jobs report, topped the week at 10% of the news hole, according to the PewResearch Center’s Project for Excellence in Journalism.

In the days after the passage and signing of the historic legislation, health care remained in the news, though the amount of coverage dropped markedly. Press attention to the finalized bill made up 9% of last week’s news, down from 45% just one week before.

This made for a particularly diverse news agenda last week. Eight different stories filled at least 4% of the newshole, and only the economy reached double digits. It was also a week that placed the fortunes of Obama Administration at the center of the news agenda in several stories, as the President continued to try to bolster his image after signing the health care bill by taking action on various U.S. domestic and foreign policies.

In addition to the economy and health care, the president made news with his proposal to open large swaths of American coastline to oil and natural gas drilling. The announcement, which rankled some environmental groups, made up 5% of the week’s news coverage, making it the No. 5 story overall.

Two other breaking stories ranked among the top news events last week. Record-breaking rainfall and flooding that decimated the Northeast filled 6% (and was the third-biggest story). And the arrest of members of a radical Christian group filled just under 5% of the news studied (making it the No. 4 story of the week).

Mixed news about the U.S. economy

On Friday, April 2, the United States Labor Department released its March jobs report, which showed a gain of 162,000 jobs for the month. The rise in employment statistics was the largest gain in three years and pushed the U.S. economy late in the week to the top of the mainstream media news agenda. It was also the first time since the week of February 15-21 that news about the economy was the top story.

Most media sectors treated the economy as a high priority. Among newspapers it was the top story at 13%, as it was with news websites at 11%. On cable TV, it was the No. 2 story, slightly behind health care, at 12%.

Network TV devoted 7% of their week’s coverage to the economy, putting it behind the flooding along the Northeast (10%), and the health care debate (8%). The economy received the least attention on radio at 4%, a medium where talk hosts fill much of the news and information time. There the health care  bill (13%) and the Obama Administration (12%) received more attention, in part because simmering debates over the political fall out suited the medium.

Many outlets welcomed a glimmer of good news for the nation’s struggling labor force. “President Obama, who often travels on days job numbers are announced, celebrated the news with fewer caveats than usual,” wrote Anne Kornblut of the Washington Post on April 2.

But nearly all reports were quick to try to put the numbers in context: “Any gains that may be shown in the March job figures may not suggest a full turnaround since some of it may be driven by temporary things like government hiring for the Census,” pointed out Sarah N. Lynch and Luca Di Leo of the Wall Street Journal on April 1. Many accounts noted that over all, unemployment remained at 9.7% nationwide.

There were some exceptions to the cautious tone: The April 2 edition liberal talker Ed Shultz’s show on MSNBC led with a package piece on the economy entitled “Moving in the Right Direction.” The piece used a handful of selected months since the end of 2008 to support Schultz’s argument that Obama’s policies have helped the economy grow. 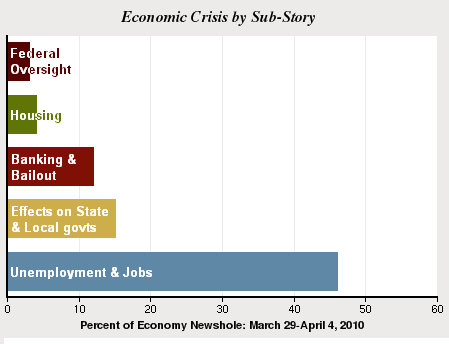 News about the economy also focused on struggling state and local governments, which represented 15% of economic coverage last week. As these jurisdictions strived to balance their budgets, many face the difficult choices of raising taxes and reducing services.

Some of these stories looked at ways that states were adding to their coffers. “The recession may be claiming a new victim,” wrote Larry Copeland for USA Today.com on March 31, “The new 5-10-mph ‘cushion’ police and state troopers across the USA have routinely given motorists exceeding the speed limit.”

Others turned to local affairs, such as the ability of local jurisdictions to maintain their public transportation infrastructure: In Washington, D.C., “Metro officials, facing a historic $189 million operating shortfall come the fiscal year that starts July 1, say raising fares and reducing service are a last resort…To fill the gap, Metro is proposing $94 million in fare increases and almost $34 million in service cuts for bus and rail,” wrote Anne Scott Tyson in the March 29 edition of the Washington Post.

Another 12% of the economy coverage examined the federal government’s assistance to the banking industry. The federal government continued to wean banks that had once been considered endangered because of so-called toxic assets. “The Treasury Department announced Monday it plans to sell roughly 7.7 billion Citigroup Inc. common shares this year,” reported Sarah Lynch of WSJ.com on March 29.

In the Rest of the News

After the economy, a host of other news attracted a sizable amount of attention. At 9% of the newshole, health care received less than a quarter of the attention paid to it by the media in the week before. Still, the bulk of the coverage—46%—focused on the politics of the bill, as President Obama promoted its benefits to the American people and Republicans sought to drum up legal opposition to it.

Yet another top story centered around the Obama Administration’s policy agenda. The President’s pursuit of oil and natural gas drilling along a number of the nation’s coast lines generated another 5% of the week’s news coverage—along with a fair amount of opposition from environmental advocates. An April 1 CBS/AP story led with a description of the mixed reactions: “Environmentalists called President Barack Obama’s decision to open portions of the East Coast to oil and gas exploration a “wholesale assault” on the oceans, while some coastal residents and lawmakers applauded the idea of cheap energy and jobs that oil platforms off their beaches could bring.” The reaction to the Obama proposal was the No. 5 story of the week.

Two breaking stories from earlier in the week also brought terrorism back into the news agenda.

Over the weekend of March 28, U.S. authorities conducted a rapid series of raids in Michigan, Ohio and Indiana that resulted in the arrest of nine members of a radical Christian militia known as the Hutaree.

News outlets struggled to fill in the missing pieces about the little-known group. CNN prime-time host Anderson Cooper interviewed Mark Potok of the Southern Poverty Law Center on March 29. Potok said, “We learned about [Hutaree] probably a little more than a year ago, but I can’t claim that we knew a whole lot about them. They look to be a very small group with a very odd ideology: a twist on the new world order with a Christian millennial angle to it.”

Dan Harris on ABC’s Good Morning America described the group in vivid terms: “Prosecutors say these are no weekend warriors: they’re alleged to be one part anti-government militia and one part fundamentalist, apocalyptic Christian army…To visit the Hutaree website is to enter an aggressive alternate universe, with Christian soldiers trained to fight on the side of Jesus during the apocalypse.”

Another terrorism-related story, this one international, made headlines last week as the No. 7 story, receiving 4% of the week’s total news coverage.

On Monday, March 29, explosions went off in two subway stations in central Moscow, killing more than 38 and wounding many more. They were carried out by two female suicide bombers.

Megan Stack of the Los Angeles Times explained the violence thus: “The suicide bombs that roared through Moscow subway cars Monday…were the latest salvo in a slow-moving war of attrition between the Russian government and militants in the restive, mostly Muslim republics of the Caucasus….The violence has threatened to erode the social contract [Vladimir Putin has] struck with the Russian public: Forgo some democratic rights in exchange for, above all, stability.

It the first week since the Mumbai attacks in 2008 that an international terrorist act was covered so heavily by the American press. 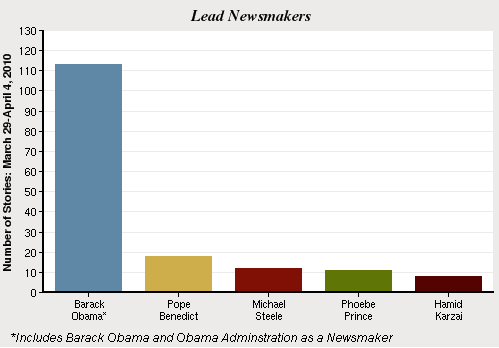 Once again, President Barack Obama was the top lead newsmaker of the week, featured in 11% of all stories (to be a lead newsmaker a person must be referred to in at least 50% of the story). The President was at the center of a number of policy-related stories this week. It was the first time since the last week in January that Obama was the lead newsmaker in such a high percentage of stories.

Behind Obama was Pope Benedict XVI, the lead newsmaker in 2% of stories. Benedict was the subject of continued press inquiries into the Catholic Church’s handling of pedophile priests. That is the same number of stories that focused on Benedict as the week before, a sign that the story did not grow last week, but nor did it subside.

Michael Steele, chairman of the Republican Party also attracted mostly unwanted media attention last week. A lead newsmaker in 1% of the week’s stories, the stories called Steele’s leadership into question amid revelations that party funds were spent at a risqué night club.

Rounding out the top five lead newsmakers of the week were Phoebe Prince and Afghan President Hamid Karzai, featured heavily in 1% of all stories each. Authorities believe Prince, a 15-year-old Massachusetts girl, hanged herself as the result of online and school-related bullying.