As it hurtled towards a climactic vote in Congress, the health-care debate accounted for more than a third of the newshole last week, its biggest week of media attention since the News Coverage Index began in January 2007.

Last minute deal-making, vote counting and suspense over a package of measures approved Sunday by the House of Representatives consumed 37% of the newshole during the week of March 15-21, according to the Pew Research Center’s Project for Excellence in Journalism. That topped  the previous high of 32%, which occurred twice before: during the week of August 10-16, when tempers were flaring at town hall meetings, and from September 7-13, when President Obama addressed the issue in speech before a joint session of Congress that was marred by heckling.

(The health care news examined in this report does not include the torrent of post-mortem coverage and commentary that followed the March 21 House vote.)

The health care coverage, dominated in turns by arcane parliamentary procedure and questions of federal funding for abortions, was especially intense on ideological cable and radio talk shows, which thoroughly dissected the political implications, win or lose, for the Obama administration.

The second biggest story of the week, at 8%, was the economy—with coverage driven by a proposal to reform federal oversight of banking and investing. Though the level of economic coverage was lower than in previous weeks, this represented the fourth straight week of a health care/economy exacta at the top of the nation’s news agenda.

Questions about run-away acceleration in Toyotas represented the No. 3 story, at 4% of the newshole. The fourth-biggest story was the Israeli Palestinian conflict (also at 4%) and the reaction to Israeli plans to move forward with a housing development in a disputed territory. Toyota’s troubles have cracked the list of top-five stories five times in recent weeks. But last week marked the first time this year that the thorny issue of peace between the Israelis and Palestinians made the roster of leading stories.

The war in Afghanistan was the fifth-biggest story (3%) with news that command of special operations forces was being consolidated in an effort to reduce accidental deaths of civilians.

Health care was the No. 1 story in all five media sectors studied by PEJ last week. But as it has been on many occasions since the story exploded last summer, the issue seemed ready-made for the talk-shows: a legislative showdown on a highly divisive issue with major political implications.

The politics of the health care plan—which Republicans predicted would cost Democrats seats in the mid-term elections and diminish support for the president—drove the narrative last week. By a ratio of nearly three-to-one, stories involving the politics and strategy of the reform effort exceeded stories about what was actually in the bills.

For the week, indeed, 80% of the airtime on the 10 radio and cable television talk shows studied was devoted to the health care story last week.

Talkers on the left, even those who had lamented the bill’s lack of a public option, largely fell into line with Democratic leaders, saying a flawed bill was better than none at all and predicting a political disaster if health care reform was not achieved.

“I know it’s not perfect but the middle class can’t wait for Congress to pass the perfect bill,” said MSNBC liberal talker Ed Schultz, who had previously criticized aspects of the bill, on March 15.

On the conservative side of the spectrum, strong criticism was leveled at a Democratic idea that would allow House members to avoid having to vote on the Senate version of health care by instead passing a package of fixes more to their liking along with language that indirectly ratified the Senate bill. The idea, which the Speaker eventually abandoned, was called “deem and pass.”

“If they don’t do an up or down vote, they are done. President Obama’s whole term is done,” Fox host Bill O’Reilly predicted on the March 16 edition of The O’Reilly Factor. “If they try to sneak it around the back door by some kind of parliamentary procedure nobody has ever heard of—I don’t care. I want an up or down vote.”

Another significant aspect of the health care coverage last week was the member-by-member tally of likely votes as the Democrats zeroed in on the magic number of 216 needed for passage. 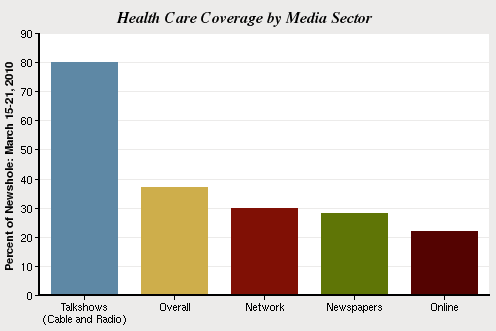 The media kept a close count, such as this report from the Los Angeles Times on March 21: “The last-minute decision Saturday to vote directly on the Senate bill undercut a Republican argument that Democrats were abusing House rules and procedures in their eagerness to pass the healthcare overhaul,” the story noted. “The decision also appeared to swing several key lawmakers behind the legislation Saturday, including Rep. Dennis Cardoza (D-Atwater), a member of the fiscally conservative House Blue Dog Coalition.”

The week’s No. 2 story, the economic crisis, filled 8% of the newshole from March 15-21, down from 12% the previous week. As is often the case, newspapers gave the subject the biggest share of coverage, at 13% of the front-page newshole.

Coverage was fueled early in the week by the unveiling of a plan for regulatory reform by Sen. Christopher Dodd, chairman of the Senate Banking Committee. Stories about increasing federal oversight of banking and investing—key provisions of the Dodd plan—accounted for nearly three times as much of the newshole devoted to the economy as the next biggest storyline: jobs.

Much of the coverage focused on how Dodd’s delayed bill amounted to a watering down of an earlier reform proposal and raised questions by critics about whether the bill would prevent another financial calamity.

“The new plan for overhauling the financial sector: is it enough to prevent another meltdown?” asked Katie Couric, introducing a story on the CBS Evening News on March 15.

Toyotas problems stayed on the list of top stories last week when the automaker, and federal safety officials, raised doubts about a man who said his Prius had accelerated out of control on a California highway. At 4% of the newshole, the story was No. 3 for the week, down slightly from 5% the previous week.

Close behind the Toyota story, at No. 4 (also at 4%), was an outbreak of s violence between Israelis and Palestinians as well as continuing tension between the United States and Israel regarding that country’s plans—announced during a visit by Vice President Joseph Biden—to proceed with a housing development on land Palestinians claim as their own.

The conflict in Afghanistan was the No. 5 story last week, filling 3% of the newshole. Chief among the stories was the news that most Special Forces units were being placed under the command of the American general in the theater in an effort to reduce civilian casualties. 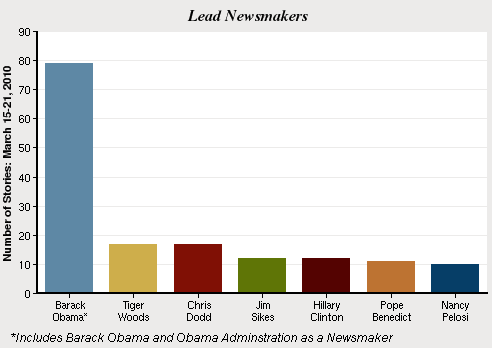 President Obama was again the lead newsmaker of the week, registering as a dominant figure in 8% of the stories (to be considered a lead newsmaker, a person has to be featured in at least 50% of that story). That was up from 6% during the week of March 8-14.

Chris Dodd, author of the proposed overhaul of financial regulations, and disgraced golfer Tiger Woods, who announced he would end his self-imposed exile from the game to play in the Masters tournament, tied at 2% of the stories.

Secretary of State Hillary Clinton, featured in a number of stories related to the diplomatic dust-up between Israel and the United States, and Jim Sikes, owner of the allegedly errant Toyota Prius, were tied for third place with 1% of the stories. That marked the second week in a row that Sikes was among the top five newsmakers.

Pope Benedict, who issued a letter of apology to victims of sexual abuse by Irish priests, was No. 4, featured in 1% of the stories. Pelosi, the House Speaker instrumental in the passage of the health care bill, was next, also at 1%.

From Health Care to Wildfires, a Broad Diet of News