With President Obama taking a more populist approach to health care reform, the battle over his top domestic priority was the No. 1 story for the third week in a row.

From March 8-14, the health care debate filled 19% of the newshole, according to the Pew Research Center’s Project for Excellence in Journalism. The narrative was driven by Obama’s impassioned approach as he took to the road and sharpened his attacks on the insurance industry. The latest spike in coverage began with the televised health care summit on February 25 and gained additional momentum on March 3 when Obama announced his desire for a vote within weeks.

The other big domestic issue, the state of the U.S. economy, was the second-biggest story at 12%, marking the third straight week it has been the No. 2 item on the news agenda. Last week’s storyline was dominated by the troubled financial sector and the jobs market.

The continued controversy surrounding departed Democratic Congressman Eric Massa was the third-biggest story (5%) last week. In the wake of charges of sexual harassment, Massa last week hit the talk show circuit. But rather than clearing his name, he stirred up more controversy with an on-air confession.

The No. 4 story was the continuing trouble for Toyota (5%), marking the fourth time in seven weeks that the carmaker has made the roster of top-five subjects. But last week, there were signs of a shift in tenor as skepticism emerged about some of the claims against the company.

The No. 5 story last week was one that rarely generates significant attention in the News Coverage Index. Stories about education filled 5% of the newshole. This was driven in part by the White House’s efforts to revamp the nation’s school system including the No Child Left Behind legislation.

Health Care and the Economy at the Top

The two big domestic issues topped the charts again last week, with some media sectors giving precedence to health care and others to the economy.

At 19% of the newshole from March 8-14 coverage of health care was up slightly from the previous week (18%) and down moderately from the week before that (24%). Last week, the subject was driven by mostly ideological talkers, filling 50% of the airtime in the 10 cable and radio talk shows studied by PEJ.

Those programs tend to focus most intently on hot button political issues, and with the legislation heading for what is widely seen as a cliffhanger vote in Congress, the coverage in the talk shows and elsewhere focused on health care politics with the President as the top attraction. 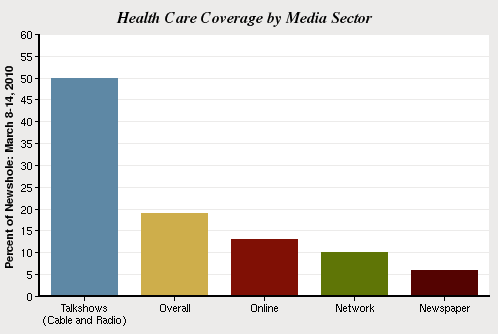 “In a high-octane appearance that harked back to his ‘yes we can’ campaign days, Mr. Obama jettisoned the professorial demeanor…instead making an emotional pitch for public support as he tries to push the legislation through a final series of votes in Congress in the next several weeks,” stated a March 9 New York Times story. “Appearing before 1,800 students and other members of the public at Arcadia University, just outside Philadelphia, Mr. Obama cast himself almost as an outsider in Washington, expressing disdain for ‘the sport of politics’ and saying the time for endless debates is over.”

On the March 8 edition of the PBS NewsHour, the commentators discussed the administration’s ramped-up criticism of the insurance industry. James Morone, chairman of the political science department at Brown University ventured that it was a strategy born out of necessity given the success of the bill’s opponents.

“They have been so deep in the policy weeds that they have left the other side, again—this always happens with Democratic efforts to pass national health insurance—they have let the other side get the sound bite about the debate, death panels this time, Harry and Louise last time,” said Morone. “They need their own distilled version…in a quick sound bite. And that, finally, is what Obama is doing now.”

When it comes to the economic crisis, coverage lately has been nothing if not consistent. This was the fifth straight week in which the subject generated between 10% and 13% of the overall newshole. In newspapers and online it ranked No. 1 at 24% and 14% respectively. A variety of events tied to the financial sector and the jobs picture made headlines.

One such story involved Lehman Brothers, the once powerful financial firm whose bankruptcy in September 2008 helped trigger frantic efforts to bail out Wall Street.

A report by bankruptcy examiner attorney Anton Valukas found that Lehman Brothers had tinkered with its accounting books to give itself more time. Several outlets covered the report including AOL News which summarized the move as “an obscure accounting trick… used to mask the financial firm’s poor health.”

Coverage of the employment situation was mixed with some stories suggesting reason for optimism. An Associated Press and Bloomberg News report on March 10 stated that “as many as 300,000 jobs may be added in March…setting the stage for what some economists believe will be sustained employment gains. …The openings, combined with better weather, hiring of temporary government census workers and a growing economy, may bring the biggest job increases since March 2006, said David Greenlaw, chief fixed-income economist at Morgan Stanley in New York.”

For the second week in a row, Congressional scandals ranked among the top five stories, accounting for 5% of the coverage from March 8-14 and generating its most attention in the cable sector (13% of the newshole).

Two weeks ago, Democratic Congressman Eric Massa, who resigned amid allegations of sexual harassment, shared the spotlight with Democrat Charles Rangel, who resigned as chairman of the House Ways and Means Committee while under investigation on ethics issues. Last week, the focus of the coverage was overwhelmingly Massa, who made highly publicized appearances with CNN’s Larry King and the Fox News Channel’s Glenn Beck and was spoofed on Saturday Night Live.

Massa, who alleged he

was pressured out of office by fellow Democrats angry at his opposition to the health care bill, made the most news with his appearance with Beck, taking “full and complete responsibility for my misbehavior” and admitting he tickled a male staffer till he could not breathe at his 50th birthday party.

At the end of the interview, Beck told his viewers that “I’m gonna shoot straight with you. I think I’ve wasted your time….And I apologize for that.”

The fourth-biggest subject, at 5% of the newshole, featured more questions about Toyota cars. But last week’s coverage involved another element, suggestions that perhaps some of the allegations against Toyota were overblown.

An Associated Press story noted that while “reports of sudden acceleration in the Toyota Prius have spiked across the country…that doesn’t mean there’s an epidemic of bad gas pedals in the popular hybrid. Experts on consumer psychology say the relentless negative media attention Toyota has received since the fall makes it much more likely that drivers will mistake anything unexpected—or even a misplaced foot—for actual danger.”

Indeed one such report, by California resident Jim Sikes who said his Prius had accelerated to over 90 miles per hour, generated media skepticism after tests by investigators raised doubts about his version of events.

The fifth-biggest story, education issues (5%), got a boost from Obama’s efforts to change school standards and generated the most coverage in the newspaper sector (9% of the front-page newshole).  But there were a number of different storylines last week, ranging from school systems facing a budget crunch to efforts to ban laptops from the college classroom, with supporters of that idea claiming they represent a distraction and an impediment to learning. 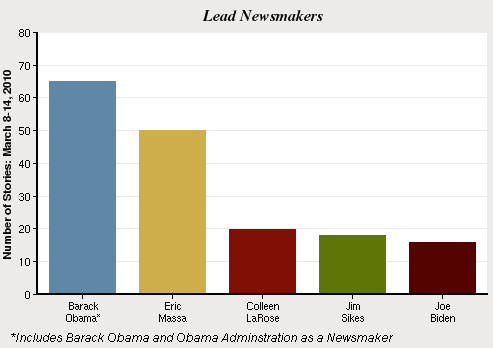 From March 8-14 Barack Obama, who took his health care pitch on the road, was the top figure in the news, appearing as a lead newsmaker in 6% of the week’s stories. (To register as a lead newsmaker, a figure must appear in at least 50% of a story.) But that’s not a particularly large amount of weekly coverage for the President and represents a drop from 8% the previous week.

The No. 2 newsmaker, Eric Massa, (5%) generated a lot of unflattering publicity last week after his media tour seemed to raise more questions about his behavior and credibility. He was followed by Colleen LaRose, (2%), more commonly known as Jihad Jane, the U.S. native and Philadelphia-area resident who was arrested on terrorism-related charges.

Jim Sikes, who claimed his Prius accelerated out of control and found his story under scrutiny, was the fourth-biggest newsmaker, also at 2%. And finishing just behind him was Vice-President Joseph Biden (2%), who was visiting Israel when that government announced a major new construction project in disputed East Jerusalem territory, precipitating something of a crisis in U.S.-Israeli relations.