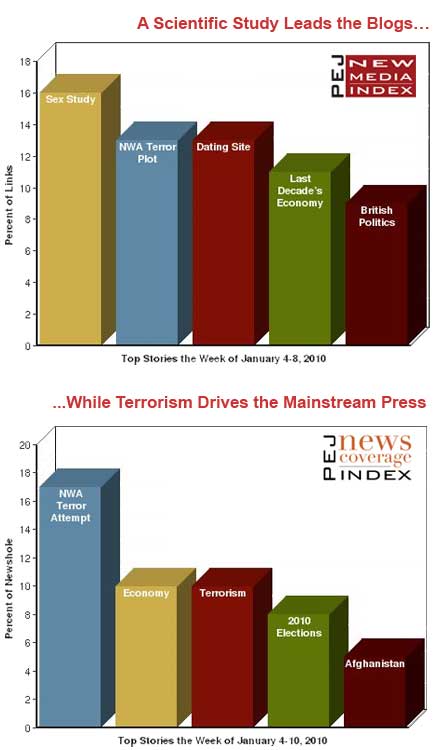 During a week when the mainstream press was consumed with issues of terrorism and national security, the online community wrapped itself up in sex and dating.

A BBC report about a scientific sex study, along with controversial actions taken by a selective online dating site, spurred reaction from people in the blogosphere and in social media. It was an example of how the less restricted and more personal nature of social media can facilitate a conversation unlikely to occur in traditional media.

From January 4-8, 16% of the news links in blogs were about a sex study conducted by researchers at King’s College in London, according to the New Media Index from the Pew Research Center’s Project for Excellence in Journalism. (The study claimed that the "elusive" female erogenous zone commonly referred to as the "G-spot" may be nothing more than a myth.)

The reactions from bloggers were immediate and ranged from criticisms of the research, to sharing of personal experiences to attempts at (sometimes off-color) humor.

A related subject that drew online responses was an action taken by an exclusive online dating site, Beautifulpeople.com. The site, which bills itself as an elite community for beautiful singles and has a "strict ban on ugly people," expelled 5,000 members for gaining weight during the holiday season.

The dating service story was the top news subject on Twitter, receiving 16% of the week’s links according to Tweetmeme, and was also the third-largest story on blogs (receiving 13% of the links there).

Most who commented on the story accused the site of narcissism, though a few saw the move as a shrewd marketing ploy by a selective business trying to get attention.

Beyond those two topics, the other stories that received attention last week focused on politics.

The No. 2 subject on blogs last week (representing 13% of links) was the failed bomb attack on Christmas day aboard a Northwest Airlines flight headed to Detroit. While this was a fraction of the previous week (when it accounted for more than half of all links), many bloggers kept up with new developments. One such development was a statement by White House national security adviser James Jones that Americans would be shocked when they read the account of missed clues.

A Washington Post article about the difficulties facing the economy and workers during the previous decade was fourth at 11%. And fifth (at 9%) was a story about the British government where Prime Minister Gordon Brown has been facing strong political challenges. 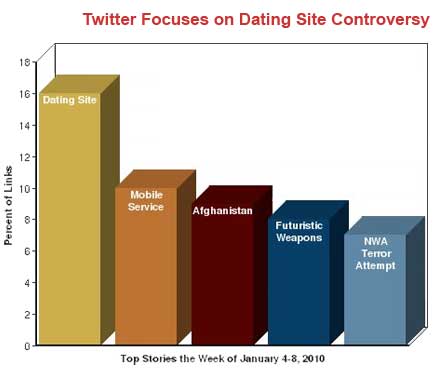 On Twitter, the second-largest story was about the expansion of a New York-based mobile location-sharing service called Foursquare, which received 10% of the links. The suicide bombing in Afghanistan that killed seven CIA officials was third at 9%, while a Wired.com story about futuristic looking weapons already in existence was fourth at 8%. The Northwest Airlines terror attempt finished fifth at 7%.

The experiment that led scientists at King’s College to determine that the concept of an erogenous G-spot may be a figment of women’s imagination "encouraged by magazines and sex therapists" consisted of interviews with 1,800 women that were all pairs of twins. The researchers hypothesized that if the G-spot was genetic, there would be more agreement between the pairs of identical twins about whether they had one when compared to the non-identical twins.

Some bloggers took a clinical look at the study and disputed the science.

"The study did not actually involve any science, but merely asked respondents to self report whether they thought they had a g-spot." concluded Jason at Erosophia. "From the self-reports of only 1800 women…the researchers can now say that such a spot must be a myth, or else these women would have known about it. Frankly, it is a shame that this kind of thing passes for science."

"I found it surprisingly unimpressive," agreed Petter Haggholm. "In particular, the exclusion criterion that discarded answers from gay and bisexual women smells very fishy, and I wouldn’t be terribly surprised if it ‘biased’ the results so far as to invalidate their conclusion."

Others compared the results to their own sexual experiences.

"Variably, I believe the fact that each one is different and we all have our own ways of reaching cloud nine," asserted ipanema at Under the Canopy. "Personally, I would not be troubled [if it did not exist]…"

More than a few aimed at humor.

"A study recently published in the Journal of Sexual Medicine claims that the G-spot is a total myth," wrote Catherinette at Bridget Jones Has Nothing On Me. "Next thing you know they’re going to be telling us that there’s no such thing as ‘the perfect man’ or ‘love at first sight.’ Why you gotta rain on our parades, scientists? WHY?"

"Who am I supposed to believe, years of women’s magazines telling me ‘73 different ways to get your boy to be a MAN in the sack!’ or a bunch of scientists from England, quite possibly the most frigid locale outside of Antarctica?" wondered Will at Concentrated Awesome.

And still others thought the emphasis was misguided.

"what is it with people and the obsession with sex anyway?" asked Amanda from a Glimpse. "sex in and of itself its not so glamourous. its all the other stuff around it, the person, the commitment, the relationship, that makes it great."*

The decision by Beautifulpeople.com to expel 5,000 members after pictures indicated they had put on weight during the holidays sparked disbelief and disdain among Twitterers.

"Anyone looking for a character study for a narcissist you will definitely find it here. Outrageous!" tweeted bakersmark.

"I’m definitely an advocate for staying healthy but this is a bit extreme!" noted Sarah Pioquinto.

"The site, which apparently operates under a middle-school mentality, only lets people into the beautiful club after a sufficient number of existing members deem them attractive enough," posted Tressugar. "They should change the site name to AreYouSerious?.com."

A few, however, did feel the site was living up to its mission.

"As to the ethics of the matter, the site couldn’t be more clear on who its target audience is. If you joined a dating site that requires you to be young, thin, and buff, you shouldn’t be too shocked to be shown the door if you get pudgy," proclaimed James Joyner at Outside the Beltway.

"One’s first instinct might be to be appalled at such ridiculously shallow behavior," admitted Heather Huntington at Twirlit. "But the site is actually honoring its commitment to its members. It clearly targets a certain type of member, and frankly, as annoying as it is, eating one too many Christmas cakes threatens that."

The most-viewed news videos on YouTube last week involved a diverse mix of subjects from around the world.

The top video came from Brazil where a veteran news anchor demonstrated the dangers of live television. At the conclusion of a December 31 newscast, Boris Casoy did not realize his mike was still on after a clip of two janitors wished the audience a Happy New Year. Casoy was then overheard saying in Portuguese, "Two garbage men wishing Happy New Year from the top of their brooms, the lowest rank in the work ladder (laughter). Two garbage men (laughter)."

The clip of Casoy was viewed more than 1.2 million times.

The second most-viewed video was an angry rant from Phillip Defranco-a 23-year-old self-described "slacker" who posts first-person videos on his own YouTube channel-about the media’s lack of attention to protests and violence in Iran.

Third was a clip from CNN’s New Year’s Eve special where comedian Kathy Griffin, who caused an uproar the previous year for swearing on live air, purposely slipped in the f-word during a discussion of Falcon Heene, otherwise known as "Balloon Boy."

Fourth was the press conference held by conservative talk radio host Rush Limbaugh after he suffered chest pains in Hawaii. In the video, he praised those in the hospital who helped him.

And fifth was footage from CNN of the ball dropping in Times Square on New Year’s Eve.

A Celebrity Crime Case Spurs Outrage in the Blogosphere