More than eight years after 9/11, the ability of a terror attack—even a failed one—to transform and dominate the news landscape was evident last week.

With the fallout from the Christmas Day airline bombing plot as the No. 1 story, topics intertwined with terrorism accounted for more than one-third (36%) of the newshole from January 4-10, according to the Pew Research Center’s Project for Excellence in Journalism. That represents the biggest week of terror-related coverage since PEJ’s News Coverage Index began in January 2007.

At the same time, the two top domestic policy issues, the economy and health care, combined to account for 15% of last week’s overall coverage.

With the focus on Barack Obama’s toughening response to intelligence failures—and with some commentary following partisan lines—the Christmas plot filled 17% of the newshole last week. A similar subject, events related to U.S. anti-terror efforts more generally, was the No. 3 story, filling 10% of the newshole. Coverage of Yemen, where bomber Umar Farouk Abdulmutallab reportedly received assistance, accounted another 4%. And a similar amount of coverage was devoted to stories taking a broad look at the struggle against Al-Qaeda and the recent Afghanistan bombing that killed seven CIA employees, for which Al-Qaeda has claimed responsibility.

The No. 2 story last week (10%) was coverage of the economy, much of which focused on the employment picture. The fourth-biggest topic, at 8%, was coverage of the 2010 election landscape, which last week was altered by the decisions by Democratic Senators Chris Dodd and Byron Dorgan not to seek re-election. All the aspects of the conflict in Afghanistan came next, at 5% of the newshole.

But last week’s news agenda was clearly dominated by terror, in some ways harkening back to those jittery post 9-11 days marked by color-coded terror alerts and grainy Al-Qaeda videos. Indeed, a story last week posted on AOL.com resurrected a once hot topic that had gradually fallen off the media radar screen.

“The issue of bin Laden’s whereabouts has come up repeatedly in recent weeks,” the piece noted. “Is the U.S. any closer to finding Osama bin Laden? Will he ever be captured?”

Terror in the Headlines

Two weeks after the Christmas near-miss on Flight 253, the bomb plot was still the top story in every media sector except newspapers, filling 13% of the newshole online, 16% in radio, 25% in network news and 29% on cable news. The level of attention in cable—with its prime time talk shows—suggests the degree to which coverage last week took on something of a partisan tinge, with the White House at the center of the debate.

On his January 7 show, Fox News host Bill O’Reilly took Obama to task, declaring he “has dismantled so many of the Bush-Cheney anti-terror programs—programs that worked against terrorism—that the president now finds himself in a very precarious situation…The president is making a big mistake by trying foreign terrorists in civilian courts, by outlawing coerced interrogation and by giving the world perception that America’s War on Terror is not a noble undertaking.” 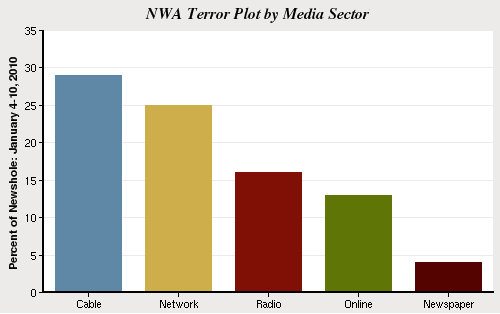 One critique that generated a considerable backlash and media fact-checking was former New York mayor and GOP presidential candidate Rudy Giuliani’s assertion on ABC’s “Good Morning America” that, "We had no domestic attacks under Bush; we’ve had one under Obama.” ABC’s George Stephanopoulos failed to challenge Giuliani on that statement, but much of the press did.

“It was a moment that seemingly called for a follow-up question,” said  a New York Times story…The misstatement—which omitted the Sept. 11, 2001, attacks, which occurred nearly eight months after President Bush took office—was roundly criticized Friday, even by some of ABC’s correspondents.

”Later, on his blog, Stephanopoulos quoted a Giuliani spokesman saying the former mayor’s remark “didn’t come across as it was intended” and Stephanopoulos offered a mea culpa, adding that, he made a “mistake” by not pressing Giuliani on “that misstatement.” Liberals went beyond criticizing Giuliani. On her MSNBC show, host Rachel Maddow assailed Republicans for their criticism of Obama’s January 7 speech on terrorism, declaring that the GOP officials who had “lined up to hammer President Obama” were “working on keeping the country safe, in other words, from President Obama.”

Another significant theme in last week’s coverage was Obama’s increasingly tough stance on the security failures that led up to the attack. A January 6 Washington Post story reported on his statement that the episode represented, “a failure to integrate and understand the intelligence that we already had. . . . That’s not acceptable, and I will not tolerate it."

“On Obama’s first full day back at the White House after an 11-day vacation in Hawaii, his words were far sharper than his previous comments since the incident, conveying a controlled anger about what he had heard in preliminary reviews of what went wrong,” the story continued.

During the January 7 edition of ABC’s newscast, Stephanopoulos opined that Obama was calling for “a radical change in performance” from the intelligence community. But correspondent Brian Ross argued that by not shaking up the nation’s bureaucracy-laden intelligence apparatus, “the President was really saying today they are more interested in protecting turf than protecting the country.”

In the wake of the Christmas attack, several other incidents contributed to coverage of the broader U.S. campaign against terror (10%) last week, including the grounding of flights at Newark airport after a man walked through a security checkpoint and a Hawaii-bound flight that received a fighter plane jet escort after a passenger’s behavior raised concern.

But some of the coverage dealt with security measures likely to be implemented to try and make air travel safer, if somewhat more complicated.

NBC’s January 7 newscast provided a demonstration of how the enhanced airport body scanners would operate as it surveyed a man who, for the purposes of the experiment, had packed weapons under his clothes. “These new electronic machines…can see through clothing,” observed anchor Brian Williams. “They can see through just about anything.”

At the same time, the recent focus on Yemen continued last week (4%), with the news that the U.S. had closed its embassy there after reports that al Qaeda fighters might be targeting the facility. There were also reports of Yemeni efforts to go after suspected terrorists given growing U.S. pressure on that government to act.

“Yemeni security forces arrested three suspected Al Qaeda militants from a cell that the U.S. has said was linked to a plot against the American or other embassies,” stated an Associated Press story posted on FoxNews.com on January 6. “Yemen’s government has increasingly claimed successes against Al Qaeda in recent days, a sign of officials’ anger over suggestions the state is too weakened to handle the fight against terrorists as the United States dramatically ramps up its counterterrorism aid to the unstable, impoverished nation.”

Still, the story went on to note the tightrope American officials must walk as they try to open this new front in the war on terror:  “The [Yemeni] government is concerned that too public an American role in the anti-terror campaign could embarrass the government, presenting it as weak before a Yemeni public where mistrust of the United States runs high. It also could bring a backlash from Islamic conservatives who are a major pillar of support for President Ali Abdullah Saleh.”

After terrorism, coverage of the economy was the top story last week, accounting for 10% of the overall newshole and registering as the No. 1 subject (18%) on newspaper front-pages.  The job picture was the leading storyline, with two pieces of data fueling the narrative. One was a survey finding that only 45% of Americans were satisfied with their jobs, the lowest number in more than two decades. The other was the release of figures showing surprising job decline in December.

“The government reported a loss of 85,000 jobs in December—much worse than expected. Economists surveyed by Briefing.com had expected no net gain or loss in payrolls in December,” said a story on CNNMoney.com

The prospects for the 2010 election cycle (8%) received the most coverage in the radio sector (14%) as several talk hosts chewed over the implications of the decision of two Democratic Senators—Connecticut’s Dodd and North Dakota’s Dorgan—not to run again. Indeed, some of the buzz surrounded liberal radio and MSNBC host Ed Schultz, who eventually put to rest speculation he might run in North Dakota.

Much of the narrative suggested that the announcements reflected an increasingly difficult political environment for Democrats. But Republican National Committee chairman Michael Steele made some news of his own by predicting that the GOP couldn’t win control of the House in 2010, a statement he later modified. Steele, no stranger to headlines, also gave a radio interview last week in which he advised Republican critics of his RNC leadership to “shut up.” 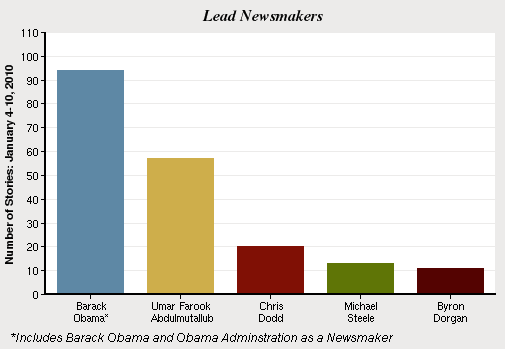 Barack Obama won the competition for exposure from January 4-10, appearing as a lead newsmaker in 9% of the week’s stories. (To register as a lead newsmaker, a figure must appear in at least 50% of a story.) Another major figure in the terrorism coverage, bombing suspect Umar Farouk Abdulmutallab—who pleaded not guilty last week—was next at 5%

The next three leading newsmakers were all principals in the week’s No. 4 topic, the 2010 elections: Connecticut Senator Christopher Dodd (2%); RNC chair Michael Steele (1%); and North Dakota Senator Byron Dorgan, also at 1%.

A Failed Terror Attack Tops a Grim Week of News

Immigration is Top Story, but Terror Takes Over