After a summer during which health care and the economic crisis dominated media attention, last week international events and crises took center stage in what proved an unusually balanced news agenda.

A gathering of leaders at the United Nations, an event marked by headline-making speeches from leaders as diverse as President Obama and Libyan leader Muammar Gaddafi, was the No. 1 story from September 21-27, according to the Pew Research Center’s Project for Excellence in Journalism. It filled 10% of the newshole in PEJ’s weekly News Coverage Index. Two other major global issues also made the roster of top-five stories last week, one of the rare weeks this year that foreign news played such a large part of the narrative.

The third-biggest story, (9%) was Afghanistan, with coverage fueled by the leak of a crucial assessment from the top U.S. commander calling for more troops. The fifth-biggest story (at 8%), was the intensifying showdown with Iran. (In that case, the big news was the surprise announcement by U.S., French and British leaders identifying a secret nuclear facility inside Iran.)

At the same time, coverage of the two biggest domestic issues decreased noticeably last week. The health care debate was the second-biggest story, but it accounted for only 9% of the newshole, down from 17% the previous week and marking the lowest level of coverage in more than two months. Meanwhile, the state of the U.S. economy, the No. 4 story, filled 8% of the September 21-27 newshole, down from 13% the week before.

Aside from its international tilt, last week’s news landscape was also noteworthy for coverage spread evenly among a range of topics. The 10% of the newshole filled by the U.N. session represents the smallest coverage for any No. 1 story in more than two years. (The still young 2008 presidential campaign led the week of August 12-17, 2007, at 8% of the newshole.)

Indeed, last week’s competition for media attention nearly ended with a crowded photo finish. In all, six stories registered at between 8% and 10% of the overall coverage, including the No. 6 subject—the investigation of the alleged and increasingly ominous-sounding terror plot involving Afghani immigrant, Najibullah Zazi. 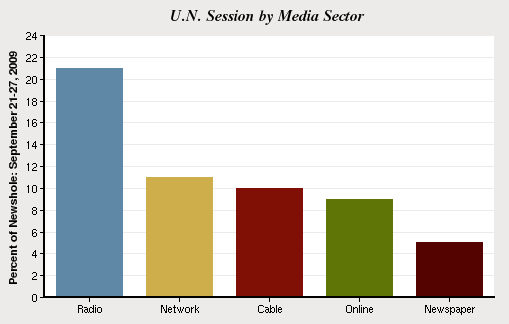 Events at the United Nations last week were the leading topic in two media sectors, radio (at 21% of the airtime studied) and network news (11%). Some of the radio coverage was driven by conservative talk hosts who were critical of Obama’s foreign-policy message.

A fair amount of the coverage focused on mercurial Libyan leader Muammar Gaddafi, who created controversy by trying to pitch a tent in several venues near New York and generated more attention with a long and rambling speech to the General Assembly.

But considerably more coverage was devoted to President Obama, who continued his pattern of making major news on the international stage by espousing an approach that seems more collaborative and conciliatory than his predecessor’s. The President’s first major foray overseas, to Europe and the G-20 Summit in London, was the top story back in the spring, March 30-April 5, when it filled 21% of the newshole. Another trip highlighted by Obama’s Cairo University speech to the Muslim world was the top story (20% of the newshole) from June 1-7.

In each case, much of that coverage focused on the new direction in U.S. diplomacy. That was also evident at the U.N. last week.

“Obama, making his inaugural address to the U.N. General Assembly, told fellow leaders in so many words that he has changed the tone and substance of U.S. security policies he inherited from President George W. Bush, and it is time for them to reciprocate,” declared the story in the September 24 Spokane Spokesman-Review.

The same day, the New York Times offered a generally positive assessment of Obama’s approach, reporting that “in his first visit to the opening of the United Nation General Assembly [he] made progress…on two key issues, wringing a concession from Russia to consider tough new sanctions against Iran and securing support from Moscow and Beijing for a Security Council resolution to curb nuclear weapons.”

Last week also reflected the growing interest in what was once the forgotten war. For the third time in the last four weeks, the conflict in Afghanistan accounted for 9% of the newshole. The big news was the September 21 Washington Post story by Bob Woodward revealing that General Stanley McChrystal’s “confidential assessment of the war,” contained in a 66-page document, concluded that failure was a likely outcome without an infusion of more U.S. troops.

Subsequent coverage focused on both McChrystal’s assessment and on the implications of the strategic leak of the confidential document to the Post, which was widely seen as increasing pressure on Obama to escalate the U.S. commitment. “As one analyst put it today, a general has put President Obama in a box,” noted NBC anchor Brian Williams on the September 21 newscast.

Shortly thereafter, however, the Afghanistan narrative took another twist when it was reported that Obama was studying a different approach to the conflict.

“President Obama may change course again as the war worsens in Afghanistan, steering away from the comprehensive counterinsurgency strategy…and toward a narrower focus on counter terror operations aimed at al-Qaeda,” stated an AP story on the USA Today web site on September 22. “The prospect of a White House alternative to a deepening involvement in Afghanistan comes as administration officials debate whether to send more troops—as urged in a blunt assessment of the deteriorating conflict by the top U.S. commander there, Gen. Stanley McChrystal.”

The third major international story involved Iran. The situation there, which filled 8% of the newshole studied in PEJ’s index, gained urgency on September 25 when Obama, French President Nicolas Sarkozy and British Prime Minister Gordon Brown revealed the existence of Iran’s secret facility—albeit one known to western governments for some time—during the G-20 Summit.

That disclosure was perceived to complicate U.S.-led efforts to prevent Iran from acquiring a nuclear weapon—a confrontation that raises the possibility of eventual military action.

“The three leaders hoped the disclosure would increase pressure on the global community to impose new sanctions on Iran if it refuses to stop its nuclear program,” stated an AP story posted on AOL News. “Beyond sanctions, the leaders’ options are limited and perilous; military action by the United States or an ally such as Israel could set off a dangerous chain of events in the Islamic world….The leaders did not mention military force. But Sarkozy said ominously, ‘Everything, everything must be put on the table now. We cannot let the Iranian leaders gain time while the motors are running.’”

All the coverage devoted to foreign policy inevitably pushed down the debate over health care. On cable news, which has particularly focused on the political aspects of the subject, the debate over health care reform was still the top subject last week, accounting for 17% of the airtime studied. But in the media overall, coverage declined to 9%, the lowest level since July 6-12, when the death of Michael Jackson was still fascinating the press. Last week, the fate of the bill proposed by Senate Finance Committee Chairman Max Baucus remained the focus. But the legislative process was not moving briskly.

An MSNBC story on September 25 reported that Congress had spent days “hashing…out amendments” to the Baucus bill and cited the results of a new CBS/New York Times poll as another reason why “it’s slow going.” The poll revealed that 59% of the respondents said the Congressional reform effort was confusing and 55% said Obama had not been clear in setting out his priorities. In one other noteworthy finding, the poll revealed that 65% favored the “public option” that has been at the center of the polarizing debate.

Coverage of the economic crisis also slumped last week, down to 8% of the newshole—even though it was the No. 1 subject (18%) in the newspaper sector. The biggest storyline last week involved the financial sector with news that the FDIC, which protects bank deposits, might need its own bailout.

One other banking-related story surfaced last week when the September 23 CBS evening newscast reported on an online video revolt by angry bank customers. The story focused on a Bank of America card holder who made her own video, viewed about 250,000 times, to complain about high interest rates.

"I could get a better rate from a loan shark," declared the woman, who clearly struck a responsive chord with some of her fellow citizens. 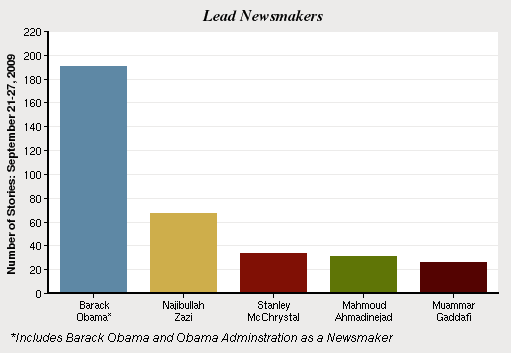 As a central figure in the foreign policy-related stories that led last week’s news, Obama dominated the competition for media exposure yet again. He was a lead newsmaker in 14% of the stories from September 21-27, up slightly from the previous week’s total of 12%. He has easily topped the news agenda most weeks since becoming president.

The No. 2 newsmaker (5% of the stories) was Najibullah Zazi, the man indicted in what some news accounts have called the most serious terrorism plot since 9/11, an alleged plan to detonate bombs inside the U.S.

The week’s other top newsmakers reflect the international focus of last week’s coverage. The third-biggest newsmaker, at 2%, was General McChrystal, who warned of dire consequences in Afghanistan without more U.S. troops. He was followed by Iranian leader Mahmoud Ahmadinejad (2%) and Libya’s Muammar Gaddafi (also at 2%).