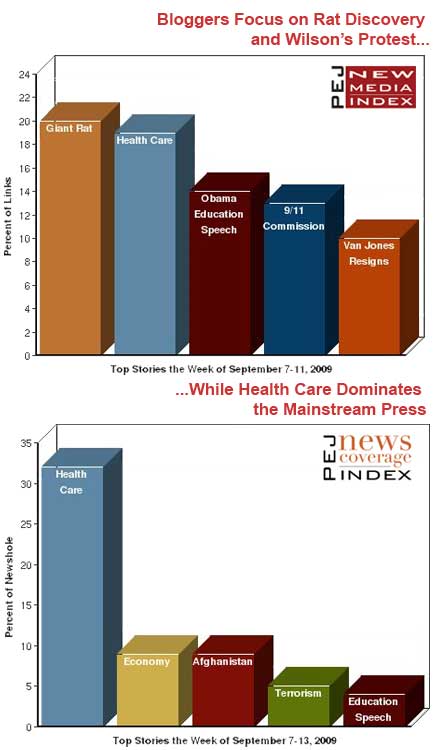 Two dramatically different stories led the blogosphere last week-the discovery of a new kind of giant rat and a Congressman’s outburst during the President’s address on health care reform. They each got almost equal attention and combined to make up 39% of the links from blogs last week.

For the week of September 7-11, a giant rat species discovered in a lost volcano in Papua New Guinea generated 20% of the links from blogs according to the New Media Index from the Pew Research Center’s Project for Excellence in Journalism. It follows a long line of unusual science-based stories that have gained traction in blogs.

Other offbeat scientific stories that have made the roster of top stories in the blogosphere have included a blue dye found in M&Ms (and tested on rats) that might help reduce damage caused by spine injuries, the discovery of a large meat-eating plant, a research exercise about a world-wide zombie attack and a story about British researchers who claim that some cats have learned to manipulate their owner’s emotions. Something about the nature of these bizarre science discoveries not only attract interest, but seem particularly ripe for sharing with the larger community.

The second-largest topic on blogs last week, health care and specifically the outburst by Congressman Joe Wilson, made up 19% of the week’s links and reflects another dynamic in blogs, strong partisan reactions to controversial political events.

That was followed by three other Washington-based political controversies.

Stories about members of the September 11 panel who suspected the Pentagon was not being cooperative with their investigation accounted for 13%.

And fifth (10%) was the resignation of Obama advisor Van Jones because of controversies surrounding some of his previous statements.

Two of those top five stories in the blogosphere last week also generated significant coverage in the traditional media. Health care made up 32% of the week’s newshole according to PEJ’s News Coverage Index, more than three times the amount of any other topic. And the controversy over Obama’s education speech was the fifth-largest topic with 4%.

Congressman Joe Wilson’s outburst also received major attention on Twitter, 12% of the news links with many tweets linking to a still photograph of the moment.

The most linked-to story, though, once again focused on the Twitter community. Fully 17% of the top news-focused links last week were to a column on CNET.com by Chris Matyszczyk which criticized a British psychologist for claiming that Twitter makes its users "dumber" while Facebook makes them smarter. This is the fifth time out of the last six weeks that a Twitter-focused story finished among the top three.

When an expedition team from the BBC announced it had discovered a new type of rat deep in the jungles of Papua New Guinea that can measure up to 82 centimeters (about 32 inches) long, bloggers wanted to share the discovery, adding comments along the way. The BBC report was the leading story on both Tuesday and Wednesday last week, receiving more than 60 links each day according to the tracking site Icerocket.

"Good news out of Papua New Guinea: several new species of various types have all been discovered," cheered Paul Richardson. "And you thought animals were only dying off, not being found."

Blogger Marko the Rat was particularly enamored of the critter: "He is 82cm, cute as a button and completely unafraid of humans."

Others found levity in the discovery.

"I’ve seen this movie before," joked South of Heaven. "Next they find the t-rex battling it out with the triceratops. Then King Kong."

"What the American people saw last night was a President who finally delivered a clear and concise plan for healthcare reform," determined Joe Baur at unpoliticalmag.com.  "The President addressed concerns that ranged from the sensible to even the loopiest of fears amongst the Republican faithful."

Others thought the speech had strengths, but was still lacking.

"Mr. Obama did some eloquent things in his speech last night," admitted Neoavatara. "But the most important absence from the speech: how are we going to pay for this monstrosity?"

Most of the links and commentary, though, were aimed not at Obama but at Congressman Joe Wilson (R-South Carolina) and his "You lie!" outburst during the speech.

"Wilson lowered the dignity of his office and showed quite clearly what a bunch of bumbling simpletons the Right is now endorsing," posted Jeffrey Stingerstein at disillusionwords.com with a link to a September 10 CNN.com account of the incident. "This was not something as simple as booing and cheering in opposition to what the President said…Instead, Wilson took this to a new level and was out right disrespectful."

"Though he [Wilson] has now issued an apology, the damage to his reputation is done.  Republican or Democrat, one is stripped of dignity and respect when they handle themselves in such a way and yelling such comments is just tacky," suggested Brenda Della Casa at Walking Barefoot.

While many chastised the congressman’s remark, some defended it and instead criticized his later apology.

"Heckling is just another form of dissent, and there’s nothing wrong with it, as long as it’s valid," supported Richard A. Smith. "Wilson quickly apologized for his outburst, but I don’t think an apology was necessary. Maybe for interrupting his speech, but no man should apologize for speaking his mind, or telling the truth."

"I was on Joe Wilson ‘s side until he apologized for telling the truth," wrote Ami. Mental.  "Not very diplomatic to shout while the president was speaking, of course, but you know, it’s not all that diplomatic to lie to the whole country. Repeatedly. With a straight face, no less." 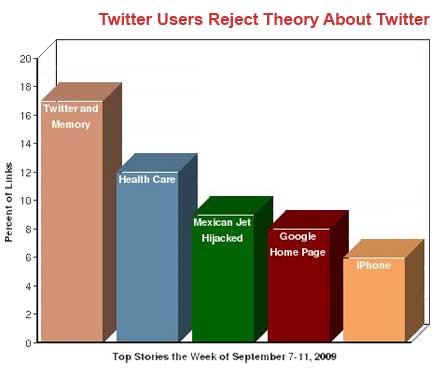 Twitter aficionados last week took offense at the suggestion that Twitter makes its users dumber by harming their memory, while Facebook makes its users smarter. That was the theory forwarded by a Scottish psychologist Dr. Tracy Alloway. The rebuttal of that argument, which appeared on CNET News, was the most popular news-related link on Twitter last week.

Most of the messages that accompanied links to the CNET story took umbrage with Alloway’s view.

"Psychologist: Facebook makes you smarter, Twitter makes you dumber. We have a winner for the moron of the day!" tweeted Mark Sigman.

"Psychologist: Facebook makes you smarter, Twitter makes you dumber (I use both, so evens out, right?)," wondered clthornton.

The most popular news clip on YouTube last week was about health care, a topic that has frequently been among the most viewed news videos in recent weeks. But the tone of this video was in stark contrast to most of the recent favorites.

The video shows Senator Al Franken (D-Minnesota) at the Minnesota State Fair having an in-depth discussion about health care reform with a number of constituents, including some who oppose Obama’s health care proposals. This was the sixth week in a row that clips of town hall meetings have been among the lead videos on YouTube. But while previous clips displayed raucous shouting and loud protests, this encounter shows Franken and his constituents discussing the controversial issues in a civil and respectful manner.

Blogs Chew Over Food and Health while Iran Surges on Twitter