With much of the focus on angry town hall meetings, the health care debate maintained its spot atop the news agenda for the third consecutive week. But coverage of the subject has gradually decreased since late July and last week, the economy and North Korea’s release of two U.S. journalists vied for attention with the increasingly politicized health fight.

The skirmishing over health care accounted for 16% of the news hole from August 3-9, according to the Pew Research Center’s Project for Excellence in Journalism. That is down from 19% the previous week and from 25% the week from July 20-26.

One key indicator of how the story was covered is who was covering it. From August 3-9 health care accounted for only 5% of the newshole in newspapers, online and network news. But it dominated cable news (37%) and radio (33%), the two sectors that include the debate-oriented programming that hammers away on polarizing issues. Indeed a PEJ examination of the 13 cable and radio talk shows in our News Coverage Index found that 59% of their airtime last week was devoted to the health care debate. And last week, the town hall showdowns—angry outbursts driven largely by opponents of Democratic health care legislation—generated plenty of partisan finger pointing.

The No. 2 story, for the sixth week in a row, was the U.S. economic crisis, at 15% of the newshole. Another subject related to the economy, the U.S. auto industry, was the fourth-biggest story (5%), with the big news the continued funding of the popular, if contentious, “cash for clunkers” program.

The third-biggest story, at 11%, was the drama in North Korea, which released two imprisoned U.S. journalists during a visit by former President Bill Clinton. While that event generated some coverage of the state of bilateral relations between the two countries, it was Clinton’s return to the world stage that fascinated the media.

The former president, or “Big Dog” as he was quasi-affectionately dubbed in some of the commentary, was the second-leading newsmaker last week, finishing behind only President Obama. His wife, who as Secretary of State is the nation’s leading diplomat, generated about one-third as much press attention as her husband.

The Health Care Debate: “A Show of August Heat.”

Even as it became clear that there would be no immediate passage of health care legislation, the issue heated up last week. And more than three-quarters of all the coverage was focused on the politics of the legislative battle and the newest and most incendiary angle to the story—the town hall confrontations.

An August 3 Los Angeles Times story—headlined “Health measure will be tough sell”—talked about the challenges facing many Democrats as they encounter vocal opposition to health care legislation. “Republicans and other critics portray Obama’s plan as a federal takeover of medicine, making it a much riskier issue for Democrats in more conservative districts,” the story said. “That includes the many Democrats elected in Republican-leaning districts in the 2006 and 2008 elections and the Blue Dog coalition of fiscal conservatives.”

“Voices are being heard all over the country, voices of protest and they’re growing louder,” noted CBS anchor Katie Couric on August 3. And much of the town hall narrative, particularly on the talk shows, was an argument over whether those protests represented broad grassroots sentiment or an orchestrated effort by conservative interest groups.

Correspondent Wyatt Andrews’ August 3 report on CBS—which included scenes of protestors shouting down Senator Arlen Specter and Health and Human Services Secretary Kathleen Sebelius in Philadelphia—ended up somewhere in the middle. “The crowds are partly the result of conservative web sites asking for turnout…but the turnouts also reflect real fear over the increased taxes and government controls,” he said, adding that opponents are “trying to kill what they call Obama-care with a show of August heat.”

On the partisan talk shows, there were no such shades of gray.

After playing an audio clip of protesters chanting “U.S.A.” and reciting the Pledge of Allegiance, liberal radio talk host Randi Rhodes declared that, “When there’s a group of people who just instantaneously burst into the Pledge of Allegiance, you can best believe that the GOP harassment strategy is back in full freakin’ force.” Rhodes blamed corporations and lobbyists for “sending out these crazy instructions” for disrupting the town hall events.

On his Fox News Channel show, conservative host Sean Hannity dismissed such a theory. “Democrats are alleging that the countless Americans that we have [seen] speaking their minds at town halls across the country are being funded by special interests,” he said, before showing video of a man confronting Democratic House Majority Leader Steny Hoyer over health care at a Maryland meeting.

“Was that man, who by the way is a registered Democrat, coached by Republican operatives?” Hannity asked. “Of course not.”

Even as the health care story moved out of Washington to cities and towns around the country, it stayed in the news last week—largely because the politics grew even more heated.

Earlier in the year, when what was often called the gravest economic crisis since the Great Depression was accounting for about 40% of the weekly coverage, it seemed as if the story might be as dominant in 2009 as the presidential election was in 2008. Instead, as the months have gone by, the financial meltdown has occupied a significant but smaller niche in the news agenda. From August 3-9, the economy was the No. 2 story at 15% of the newshole. (It was the No. 1 story in newspapers, at 20% and online, at 19%.) That marks the sixth straight week the economy has been the second-biggest story in the News Coverage Index. And in each of those weeks, the level of attention has been remarkably consistent—between 10% and 15% of the newshole. 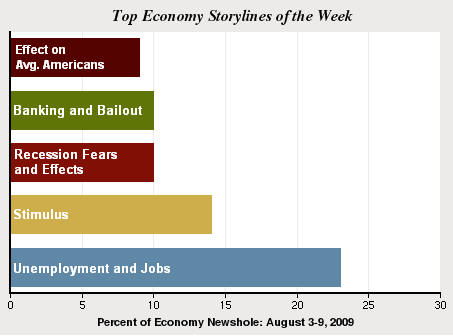 Last week, a report showing a small drop in the unemployment rate—to 9.4%—was one of the events the helped drive coverage. Meanwhile, some of the narrative focused on the many ways in which the economic downturn has affected daily life. An August 6 story in the Wall Street Journal reported how the recession was driving some coffee shops to restrict laptop use by dawdling customers taking up valuable space. And in the category of all news is local, the August 6 Herald News in Fall River Massachusetts reported that five city streets would be repaved thanks to $805,000 in federal stimulus money.

Filling 11% of the newshole, the return of Euna Lee and Laura Ling from imprisonment in North Korea was the third-biggest story last week. And it was the top story on network news, at 16% of the airtime studied. The central role of former President Clinton in facilitating their release was a major element of the coverage and a photo of him sitting somberly next to North Korean leader Kim Jong-Il was one of the week’s ubiquitous news images.

When the media raised the question of whether the resolution of this situation would lead to a thaw in relations, the message seemed to be a firm no. “The White House today tried to separate Clinton’s ‘humanitarian mission’ with the nuclear non-proliferation issue and argued that U.S. policy toward North Korea remains unchanged,” reported a story posted on the ABC News site, which quoted White House Press Secretary Robert Gibbs as saying, “I don’t read a lot of precedent into it.”

The No. 4 story from August 3-9 was the automotive industry (5%) and the major news was the Senate’s approval of an additional $2 billion to fund the “cash for clunkers” program that provides a government rebate for people trading in old gas guzzlers. As is the case with many domestic issues, the funding vote broke down largely among partisan lines, with many Republicans opposing.

The fifth-biggest story last week was the confirmation (by a 68-31 Senate vote) and swearing in of new Supreme Court Justice Sonia Sotomayor, at 5% of the newshole. That matches the overall level of coverage the Sotomayor story has generated between the announcement of her nomination and her swearing in (from May 25-August 9). But coverage of the first Latina justice was sporadic, spiking during the week she was introduced (24% the week of May 25-31) and during the Senate confirmation hearings (22% from July 13-19). The rest of the time, media interest waned substantially. 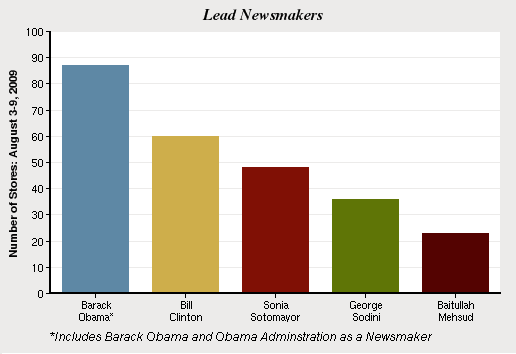 Barack Obama made the most news from August 3-9, appearing as a lead newsmaker in 7% of the week’s stories. Still, that is a modest level of coverage and a slight decline from 8% the previous week.

The second-biggest newsmaker, at 5%, was Bill Clinton, whose mission to North Korea marked a major re-emergence into the national and international spotlight. (The two journalists who returned to the U.S. with Clinton, Laura Ling and Euna Lee, were further down the list of newsmakers, at 1% apiece.) In contrast, Secretary of State Hillary Clinton was the No. 6 newsmaker, registering in 2% of the stories.

The week’s third-leading newsmaker was Sonia Sotomayor (4%). She was followed by George Sodini (3%), the man who killed three women and wounded nine at a gym near Pittsburgh before turning the gun on himself. Sodini had written openly about his frustration at being unable to attract women on blog entries. The fifth leading newsmaker (2%) was Baitullah Mehsud, the Pakistan Taliban leader reportedly killed by a U.S. missile strike.