The Senate confirmation hearings for Sonia Sotomayor topped the news agenda last week, filling almost one-quarter of the newshole and accounting for one-third of the cable airtime. But ironically, the media narrative found that the most newsworthy element of the confirmation showdown was the absence of news.

The event seemed to illustrate an odd pattern that may be even stronger today in the era of smaller newsrooms: the news may be as much a function of where journalists are assigned to spend their time as what really happens there.

The Sotomayor Supreme Court nomination accounted for 22% of the overall coverage for the week of July 13-19, as measured by the Pew Research Center’s Project for Excellence in Journalism. According to PEJ’s weekly News Coverage Index, it was the lead story in the online, network news and cable new sectors and was just short of the level of coverage (24%) from May 25-31, the week her nomination was announced.

Yet for all the pomp and circumstance of Senate hearings, the significance of a lifetime term on the High Court and ideological skirmishing over the nominee, two other themes seemed to dominate the coverage. One was that Sotomayor, barring a major gaffe, was virtually assured of confirmation going in. The other was that she provided almost no insight into her thoughts and ideas on major issues, a pattern that has emerged with other recent nominees. Indeed, the lack of news, and the empty ritualistic nature of the event, seemed to dominate a weary media storyline.

“A Nominee on Display, but Not Her Views,” read the headline on a New York Times analysis, while some commentators questioned the value of the confirmation process in its current incarnation.

The week’s No. 2 story, at 13% of the newshole, was the economy. The news of big rebounding profits at Goldman Sachs and JP Morgan Chase helped drive the coverage. The debate on health care legislation, which last week focused on the daunting price tag, was next, filling11% of the newshole. That was followed by the U.S. campaign against terrorism (6%), a story fueled by revelations about a secret program to assassinate Al-Qaeda leaders. And the murder of a Florida couple who cared for 17 children, which has led to the arrest of eight people, was No. 5 at 5% of the newshole.

The week of July 13-19 was also notable for the stories that dropped off the roster of press priorities. After several weeks as the media’s lead topic, the fallout from the death of Michael Jackson plunged to 2% of the newshole, from 17% the previous week. The focus on Sarah Palin’s resignation as Alaska Governor, as well as her future, fell to 1% from 7% the week before.

And for the second week in a row, the political turmoil in Iran accounted for only 1% of the coverage.  With street violence abating and the struggle between government hard-liners and reformist forces becoming more subterranean, the situation has clearly become more difficult for the media to monitor. The question is whether the U.S. press has also lost interest in the story.

Last week’s confirmation hearing was the No. 1 story in three of the five media sectors including online (24%), network news (18%) and cable, where it filled 33% of the airtime studied. Some of the cable commentary focused on the hot-button issue of race and identity politics, with the nominee’s now-famous “wise Latina” statement serving as a catalyst.

That debate injected some polarizing passion into a storyline otherwise largely devoid of drama. That was due in part to the consensus that with Democrats comprising a solid majority in the Senate, Sotomayor was a shoo-in, barring, as South Carolina Republican Lindsey Graham put it, a “complete meltdown.” Indeed, Graham’s virtual dismissal of the impact of the proceedings was one of the more highly quoted moments of the week.

A July 13 Associated Press story, for example, observed that despite the “pointed questioning in a grueling, day-long hearing, there was little doubt that President Barack Obama’s first high court choice — with solid backing from the Democrats and their lopsided Senate majority — would be confirmed.”

Some of the coverage also concluded that Sotomayor, despite the perception that she was the liberal nominee of a liberal President, had amassed a generally moderate record on the bench.

A Los Angeles Times story examining one aspect of her record found that, “When it comes to business lawsuits, Supreme Court nominee Sonia Sotomayor can be hard to pigeonhole. Although Sotomayor’s opponents paint her as an activist with a liberal bent, many legal experts say her record is far from that of an ideologue on business issues."

Another prevalent theme in the coverage was that Sotomayor, following the same strategy used by other recent nominees, opted for politically cautious responses designed to deny ideological fodder to critics. Two decades after the fireworks of Robert Bork and Clarence Thomas, the media seemed to signal that they may be ready to reevaluate the news value of such hearings, which still received the treatment of live coverage, multiple reporters per news organization and two-a-day front page stories in major papers.

“There’s not anything that you and I would call fireworks,” noted CNN’s Candy Crowley, using a bit of understatement to describe the proceedings.

A July 15 story on the ABC nightly newscast reported that Sotomayor was following a “time-honored strategy that we’ve seen from nominees going back twenty years of just not saying too much. …On the third day of Sotomayor’s confirmation hearing, she kept her responses safe.”

“When asked what the hearings revealed about Judge Sotomayor’s legal views, Harvard Law School professor Laurence H. Tribe…had a simple reply: ‘Nothing,’” reported a July 17 New York Times analysis. “Supreme Court hearings have not always been so unremarkable. But nominees began to shut down after 1987, when Democrats rejected the nomination of Judge Robert Bork after he engaged in an assertive defense of his conservative legal philosophy rather than denying that he had one.”

While much of the week’s coverage remarked somewhat glumly on the “unremarkable” nature of the hearings, columnist David Broder contended that simmering beneath the surface last week were deep seated resentments on both sides of the aisle.

“By making the best of their meager case against Sotomayor, the Republicans signaled Obama that they are ready to fight harder if he names to the bench other liberals less armored by their personal histories,” he wrote. “But the Democrats are clearly ready for that fight, fueled by their resentment of the two Bush appointees who have already moved the Supreme Court in a markedly more conservative direction.” 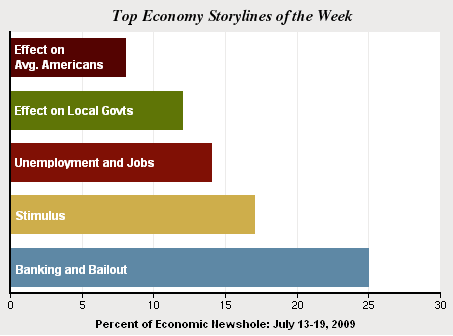 Media attention to the still floundering economy seems to have fallen into a predictable pattern in a press culture that abhors the predictable: moderate coverage that keeps the story in the headlines, but usually in a secondary position to the week’s big breaking news event. For the fourth time in five weeks, the economic crisis was the No. 2 story, accounting for 13% of the newshole from July 13-19.  It was the top story in the newspaper sector, accounting for 19% of the front-page coverage.

While a steep drop from the earlier coverage–the economy filled more than 40% of the newshole in the first two months after Barack Obama’s inauguration–the recent level of financial crisis coverage has remained remarkably consistent. In the past three months, the story has accounted for 13% of the newshole, still well ahead of the No. 2 story in that period, the U.S. fight against terrorism (7%).

Last week, economic coverage was divided into several key storylines, including unemployment issues and the administration’s stimulus package. But the top theme concerned the financial sector, a narrative driven by reports that some troubled banks were back in the black in a big way. But it wasn’t all good news.  A July 18 Washington Post article reporting that J.P. Morgan Chase, Goldman Sachs, Bank of America and Citigroup had earned about $14 billion in the second quarter of the year, declared that  those upbeat numbers had become a “political problem“ for the administration since “the broader economy is not seeing the benefits.”

The week’s third-biggest story, the debate over health care, accounted for 11% of the overall coverage, the highest level of attention to that subject since PEJ began its News Coverage Index in January 2007. (It was the top story in the radio sector last week at 21%). Last week’s Obama’s push for legislation appeared to suffer a setback when a Congressional analyst signaled concern about the economics.

Obama’s “far-reaching plan to guarantee all Americans healthcare coverage faced trouble on Friday over its more than $1 trillion price tag, so Democrats looked for ways to reduce healthcare costs as they moved the bill forward,“ stated a July 17 Reuters story. “Doubts about the high cost of Obama’s signature domestic policy effort emerged on Thursday when Congress’ own independent budget analyst said reforms being considered would do little to control rising costs.”

The No. 4 story, at 6% of the newshole, involved U.S. anti-terrorism efforts and focused on the revelations that CIA director Leon Panetta had shut down a secret program designed to assassinate Al-Qaeda leaders. The fifth-biggest story (5%) was a grisly crime in Florida in which Byrd and Melanie Billings, a couple who had adopted numerous special-needs children, were murdered in a home invasion that has sparked a wide-ranging investigation.  In another week without a Supreme Court nominee leading the news, this might have been a bigger story. As it was, the crime was the No. 2 topic (12% of the airtime studied) on network news. 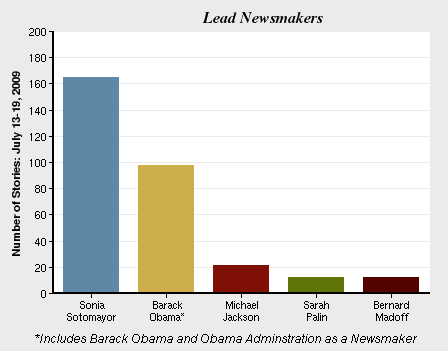 Sonia Sotomayor beat out the man who nominated her for the second time in two months as the top weekly headline maker. She appeared as a lead newsmaker in 13% of the stories from July 13-19 compared with 8% for Obama. (In the week of May 25-31, when she was nominated, Sotomayor also the top newsmaker at 14%).

Moreover, this marked the fourth week in a row in which someone other than the President was the dominant newsmaker, with Michael Jackson leading the news in the other three weeks.

That dip in Obama’s presence in the news coincides, or maybe presages, a slide now emerging in his standing in public opinion polls.

Even though coverage of singer Michael Jackson tailed off dramatically last week, he was still the third-biggest newsmaker, at 2% of the stories. He was followed by outgoing Alaska Governor Sarah Palin (1%) and convicted swindler Bernard Madoff, tied at 1% each.