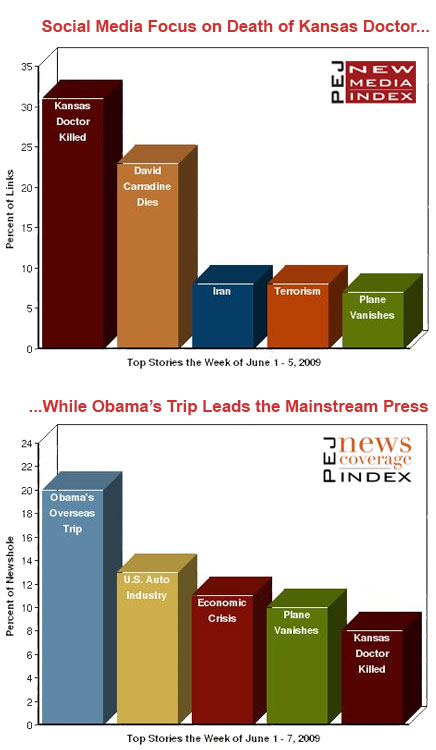 The killing of abortion doctor George Tiller was eclipsed by Barack Obama’s Mideast trip and economic news in the mainstream press last week. But in the social media, the May 31 shooting that sparked an impassioned debate over a divisive issue was the week’s dominant subject.

From June 1-5, the death of Tiller-a rare provider of late-term abortions who was shot while in church-generated 31% of the week’s links on the Web tracking site Icerocket, according to the New Media Index by the Pew Research Center’s Project for Excellence in Journalism.

Much of the online commentary was intense and polarizing, reflecting the hardened ideological fault lines on abortion.  For many of those who were pro-choice, Tiller’s murder was an act of terror against a man who devoted his life to helping women. Conversely, pro-lifers saw Tiller as someone responsible for the deaths of thousands of unborn fetuses.

But beyond those arguments, a more complex series of cross-currents emerged in the blogosphere commentary. While most pro-life advocates condemned the murder, some wondered if it could be morally justified. Some pro-choice bloggers speculated about the role of certain talk hosts in inciting violence. And commentators on both sides of the issue pondered the impact of the crime on the ongoing battle over abortion policy.

The second-largest story in social media last week, receiving 23% of the week’s links on Icerocket’s list, was the death of actor David Carradine in Thailand at the age of 72.  The next two were more serious, policy related topics: At 17% of the links was a June 2 report by the Associated Press (on the Washington Post Web site) about whether a comment from Obama signaled that it might be acceptable for Iran to develop nuclear power for peaceful use. This was followed by discussion of efforts to protect against terrorist attacks (8%), triggered by a  USA Today/Gallup  poll showing most Americans oppose the closing of Guantanamo Bay. And the No. 5 story, at 7%, was of the tragic June 1 crash of an Air France plane with 228 aboard.

The top stories in the mainstream press last week focused on Obama’s Mideast trip and Cairo speech (20% of the week’s newshole), followed by  the ailing U.S. auto industry (13%) and the ongoing economic crisis (11%). The Air France disaster was next at 10%. The Tiller shooting filled 8% of the newshole, roughly one-quarter of the attention it generated online.

For many of those who supported Dr. Tiller, the initial response to news of his murder was a mix of anger and sorrow.

"Words fail me right now," admitted sleepykelvina. "A man who was a brilliant doctor, father, grandfather and usher at his church, was gunned down in cold blood yesterday morning…He did this work because no one else would. He did it because he was one of the few who dared stand up to the gaping maw of insanity to help someone, even at the cost of his life. He saved a lot of women. And he paid for it with his life."

"Anyone who thinks that Dr. Tiller’s death is anything but a tragedy…let us not forget that regardless of his job (which was primarily to be an OB GYN…he delivered far more babies than he aborted), a man was gunned down in cold blood in his church," added Deliciously Naughty.

Most anti-abortion bloggers condemned the murder-even if they opposed Tiller’s work.

"Far and away the vast majority of those who support life do just that; support life and the rule of law," declared Rich Glasgow at Isn’t It Rich. "We hate abortion just as we hate murder. It is not our place to take vengeance on those who perform abortions. We leave that up to a Higher Court."

At the same time, a number of pro-life voices, while not condoning the killing, characterized Tiller’s actions as a form of murder itself.

"Murdering abortion Doctors, bombing clinics and vandalizing them, is just plain wrong, is unjustified and does great harm to the Pro-Life cause," asserted mark12ministries. "But all the political and legal realities cannot hide the fact that these issues of abortion and murder are extremely complex. Is the act of abortion the unjustified taking of a human life? Yes. Therefore, can we call it murder? In the eyes of God I believe it is murder but in our current legal system it is not murder."

"Why do we react in shock when someone uses deadly force to prevent someone from committing legalized murder?" asked Pastor Michael Newnham at Loose Ends. "While I’m in no way advocating murdering abortionists, I’m very surprised that it hasn’t happened more often. The elephant in the room is that in every other area of life we stop murders any way necessary."

Other pro-lifers expressed concern over what the killing could mean for their cause.

"This story will have huge ramifications on the pro-life movement in this country," affirmed Marcel at Aggie Catholics. "The pro-abortion crowd tries to make pro-lifers out to be dangerous nuts and this doesn’t help the perception problem. Many have already labelled pro-lifers as ‘terrorists’ and we should not be too suprised if this is used as a vehicle to restrict pro-lifers’ constitutional rights."*

On the other side, some pro-choice advocates picked up on a topic that became part of the cable news conversation last week: Did any responsibility lie with Fox News host Bill O’Reilly who had frequently and harshly criticized Tiller on his show?

"O’Reilly frequently linked Tiller to his longtime obsession, child molestation and rape," noted From the Left. "O’Reilly suggested that the clinic was somehow covering up for child rapists by refusing to release records on the abortions performed…Dr. Tiller, according to Bill O’Reilly…was a decadent, Christ-child hating, elite who finally paid the price for his sins on ‘judgment day’ in a church no less, in Wichita, KS."

Many bloggers focused on the mysterious circumstances surrounding the death of David Carradine. But they also commented on the career of an actor best known for his role of Kwai Chang Caine in the ‘70s television program Kung Fu.

"His most notable role was playing Arlo Guthrie in Bound for Glory but he also was excellent in Walter Hill’s The Long Riders as Cole Younger and as Shepard in Q," recalled Dave’s Movie Corner. "We’ll miss you, Carradine. Your death is a hole in the fabric of the country that will never be filled."

"He was one of the few actors I liked enough to notice," remarked Jayiin Mistaya.

The attention to Carradine’s death is part of a trend that has emerged in the PEJ examination of the social media-a level of interest in the deaths of celebrities of various magnitudes that far exceeds coverage in the mainstream press.  For example, the murder of rapper Dolla was the second most linked-to story for the week of May 17-22, the passing of comic actor Dom DeLuise was the fourth-largest story the week of May 4-8, and the death of science fiction author JG Ballard was the third largest story for the week of April 20-24. None of these events were among the top 10 stories in the traditional press in those weeks which speaks to the way that communities spurred by mutual interests can organically emerge in social media.

The most viewed video last week was the final May 30 performance for Susan Boyle on the reality television program, Britain’s Got Talent. Boyle gained immense overnight popularity online during her first appearance on the show back in April when the distinctly unglamorous 47-year-old shocked the judges and audience with her singing ability. In the week of April 18-24, two of the top most viewed news videos were about her initial performance and meteoric rise to fame.

In what was viewed as something of an upset, Boyle ultimately finished as a runner-up in the competition and then became tabloid fodder when she ended up in a London clinic being treated for what was called exhaustion.

Boyle’s celebrity has in many ways been a prime example of how the Web and YouTube can turn an unknown into an instant world-wide sensation. And as Boyle’s story suggests, that kind of roller coaster ride can prove stressful.

Note: YouTube has removed the ability to embed the video of Boyle’s performance on other Web sites. To be taken to YouTube to view the clip ” target=”_blank” rel=”noopener noreferrer”>click here.

On State of the Union Week, It’s All About Obama

No Story Dominates, But Iran Fascinates