As the old saying goes, once is an accident, twice is a coincidence and three times is a trend. Last week, with terrorism registering as the No. 1 story for the third time in little over a month, a clear trend emerged: The complex, visceral and increasingly politicized issue of how to combat the terror threat is now leading the mainstream news agenda, even pushing out the economy.

For the week of May 18-24, the subject filled 19% of the newshole in the News Coverage Index from the Pew Research Center’s Project for Excellence in Journalism. Two major events drove the coverage: The Democratic-controlled Congress rebuking Obama by refusing to fund the closing of the Guantanamo Bay prison and dueling speeches by Obama and former Vice-President Dick Cheney that much of the media treated like the national security equivalent of Ali-Frazier.

For all of 2008, by comparison, terrorism accounted for just 1% of the newshole.

The new spike in terrorism coverage can be traced to one event, the April 16 release of memos detailing the controversial Bush administration interrogation techniques. Since then, the story of the fight against terrorism has become the kind of inside Washington melodrama that is often a catalyst for major press attention, though it may have less to do with terrorism itself. That’s largely because of the political battle between Obama and  Cheney, as well as a side story involving House Speaker Nancy Pelosi, who challenged the credibility of the CIA. Those three have been the top three newsmakers overall for the last two weeks.

Last week some of the attention sh

ifted to New York with the uncovering of an alleged plot by domestic terrorists to blow up synagogues and shoot down a plane (No. 5 story at 3%). But as terrorism has at least temporarily supplanted the economy as the primary battleground between Democrats and Republicans, it remains at this point still mostly a Beltway saga.

The economic crisis was the No. 2 story last week, filling 17% of the newshole studied, up from 12% the previous week. The biggest news was the passage of a potentially far-reaching measure regulating credit card companies. But another major storyline was the increasingly dire financial situation in the nation’s most populous state, California.  A related story (No. 6 in the news agenda at 2%) was the troubled auto industry with reports that the Obama administration was ushering General Motors toward a bankruptcy declaration.

Terrorism: No on Gitmo and a split-screen face-off

The period from May 18-24 marked the third time in five weeks—and the second in a row—that terrorism topped the news agenda. And the level of coverage has been quite consistent. The subject filled 21% of the newshole from April 20-26, and 22% from May 11-17. Last week, it was the top story in three sectors, cable (34% of the airtime studied), radio (23%) and network news (20%).

Two weeks ago, much of the coverage on the Democratic side focused on the controversy that ensued when House Speaker Pelosi claimed the CIA had misled Congress about waterboarding techniques. Last week, it was Obama clearly in the limelight as the President experienced two significant challenges to his efforts to reverse Bush-era policies related to terrorism.

Part of what made the story so big was that the media narrative portrayed the Senate’s overwhelming May 20 vote denying Obama the money to close the Guantanamo facility as a significant setback. 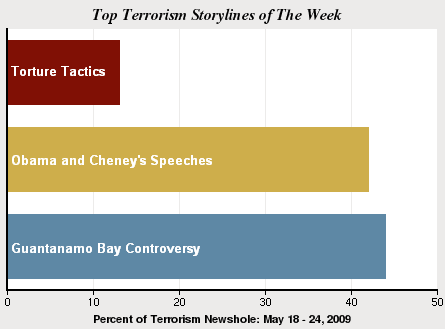 “Tonight, President Obama rebuked and by his own party,” declared CBS anchor Katie Couric that evening. “The new President’s first major legislative defeat…blocking the President from closing the prison camp at Guantanamo Bay because no [Senate] member wants any of the detainees there sent to his or her home state or district.”

That narrative was added to one day later, when Obama and former vice president Cheney delivered speeches at almost the same moment offering starkly different anti-terrorism strategies. The substantive and stylistic contrasts between the new President—who has frequently faulted the policies of his predecessor—and the ex Vice-President—who has emerged as Obama’s most vocal critic—created a sense of drama and import that the press found irresistible, especially in light of Obama’s legislative defeat.

A report on NBC’s May 21 newscast by White House correspondent Chuck Todd asserted that “the day turned into split-screen political theater….The two back-to-back speeches became a virtual debate on harsh interrogation methods…on Guantanamo…and on whether legal memos outlining interrogation methods should be made public.”

“In an extraordinary set of speeches, the still-new president, who refers often to the problems he inherited from his predecessor, and the previous administration’s most forceful spokesman laid out their positions just minutes apart in locations separated by barely a mile,” stated a May 22 Washington Post story. “Presidential scholars could not recall another moment when consecutive administrations intersected so early and in such a public way.”

The No. 2 story of the week, at 17% of the newshole, was the economic crisis which was the top subject in newspapers, 28%, and online, 16%. Two basic storylines filled the economic narrative last week. The passage of credit card reform legislation was one; the state of California’s dire economic condition was the other.

A May 20 Reuters story suggested just how widespread the implications of the credit card measure could be. “The bill could hit home with more consumers than any other economic initiative launched so far under Obama, with some experts predicting a broad restructuring of how credit cards are priced, managed and marketed,” the story noted.

The California crisis was highlighted in a May 21 Los Angeles Times story carrying the banner headline, “State braces for brutal cuts.”  One story, focusing on the possibility of a federal bailout, said that, “state leaders are demanding an unprecedented federal rescue of their own. They say they need the Obama administration to step in and back billions of dollars in emergency loans….The argument is familiar. Just like AIG and General Motors, California says it is too big to fail.”

The week’s third-biggest story, at 4%, was the White House unveiling of a plan to regulate mileage and pollution standards for the auto industry. It is easy to imagine, in a week without the Obama-Guantanamo-Cheney equation, the resolution of a quarter century of air quality debate being a bigger story.

“The Obama administration announced Tuesday what amounts to a sweeping revision to auto-emission and fuel-economy standards, putting them in the same package for the first time,” according to the USAToday.com story posted on May 19. “The plan would require cars and trucks to average 35.5 miles per gallon by 2016, President Obama said at a ceremony with legislators, regulators, executives of 10 car companies and the United Auto Workers union. The plan would increase the standard and accelerate the requirement from 35 mpg in 2020 set by the 2007 Energy Act.”

The fourth-biggest story (3%) was the meeting in Washington between the new U.S. President and the new Israeli Prime Minister Benjamin Netanyahu, two men whose countries are allied, but who have some substantive differences. Their May 18 summit was watched closely by the media for signs of either discord or unity.

The Washington Post reported that despite “the shared goals of preventing Iran from developing nuclear weapons and of achieving a peace agreement between Israel and the Palestinians,” there were “significant differences in tone and terminology that exposed their d 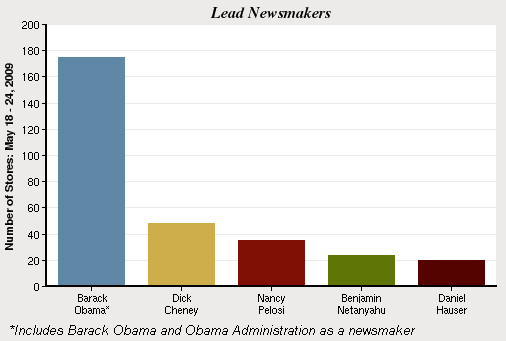 ivergent approaches toward achieving peace in the Middle East…. Obama has endorsed the creation of a Palestinian state alongside Israel as the best way to establish peace between it and other Arab nations… Netanyahu….declined to endorse Obama’s call for a two-state solution to the conflict [and] made clear that his interest in checking Iran’s nuclear ambitions is far greater than his desire to revive dormant peace negotiations with a divided Palestinian leadership.”

In the category of more news is not always good news, the President in a challenging week became a bigger story. With Obama front and center in the terrorism debate, he was the lead newsmaker in 13% of the stories from May 18-24, his highest level of coverage in seven weeks.1 Next at 4% was the man who was his debating partner of sorts, former Vice-President Cheney. The third-biggest newsmaker was House Speaker Pelosi (3%), who was still dealing with the fallout over her challenge to the CIA’s credibility.

The No. 4 figure in the news last week was Israeli leader Netanyahu (2%) followed by Daniel Hauser (also at 2%). Hauser is the 13-year-old cancer patient who found himself at the center of a legal battle after his family opted out of conventional treatment options that doctors say could say the boy’s life. His mother, Colleen Hauser, was a lead newsmaker in another 1% of the week’s stories.

1The PEJ did not calculate the lead newsmakers for the week of April 20-26.

Extra! Extra! McCain Makes as Much News as Obama