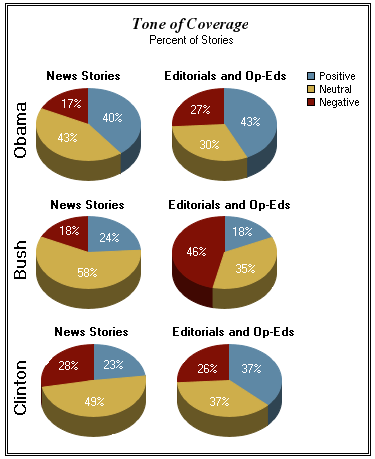 One other difference is that Obama has won the narrative in both the news accounts in print and TV and in the opinion pages. That was not the case for Clinton and Bush.

Looking at only news accounts, (removing newspaper op eds and editorials as well as Newsweek magazine) Bush’s coverage in 2001 was actually more positive (24%) than negative (18%) during his first two months. On the other hand, the op ed and editorial pages tended to offer harsh assessments of Bush (18% positive and 46% negative.)

Clinton’s news coverage, by contrast, was more negative (28%) than positive (23%), while op ed and editorial writers tended to favor him in those early days (37% positive and 26% negative).

Obama prevailed in all of these venues. Fully 40% of news stories were positive while just 17% were negative. In op eds and editorials, the numbers have been fairly similar (43% positive vs. 27% negative). Newsweek stood out even more. More than half of its stories have carried a clearly positive tone for the President, 53% vs. 23% negative.

Next: Focus of Coverage
← Prev Page
Page1Page2Page3Page4Page5You are reading page6Page7Page8Page9
Next Page →