With world leaders gathered in London last week, a financial crisis that had largely been covered through a domestic prism expanded to a global narrative.

The G-20 Summit and Obama’s European trip was the No. 1 story from March 30-April 5, filling 21% of the newshole measured by Pew Research Center’s Project for Excellence in Journalism. The U.S. economic crisis was close behind, at 19% of the space in print and online and time on television and radio. This marked the first time since inauguration week that the financial turmoil in the U. S. was not the week’s top story, according to PEJ’s weekly News Coverage Index. (It was the leading story in the newspaper, online and radio sectors. But the summitry, staffed by the three network anchors and replete with TV-friendly visuals, was the No. 1 story on cable and network news.)

Although the center of attention shifted from the U.S. to the U.K last week, the basic storyline did not really change. About half the European trip coverage focused on economic issues. Combine that with the domestic economy story and coverage of the automotive industry (the No. 3 story at 13%) and economic-related themes still accounted for 42% of all news coverage studied last week.

In the early part of the week, the turmoil in Detroit was the dominant story line, thanks to the Obama Administration’s dramatic move to force the resignation of General Motors Chief Executive Rick Wagoner and its indication that so far, GM’s and Chrysler’s restructuring plans were insufficient. But as time went on, the President’s first overseas journey commandeered the media agenda.

Some of that coverage was more about symbolism than substance. One example was the mini furor when Michelle Obama pushed the protocol envelope by touching Queen Elizabeth gently on the back. (“gasp!” declared the headline on the Entertainment Weekly site.) But even with the pageantry and faux pas coverage, the press spent much of its time evaluating the summit’s track record on the global fallout of the economic crisis.

While there were many subsidiary storylines—including anti-globalization protests and Michelle Obama’s high profile—several major themes emerged in the coverage of the European trip.

One was the change in the tone of U.S diplomacy—with Obama widely seen as representing a much more consensus-seeking and conciliatory style than his predecessor.

Typical of that coverage was an April 3 Los Angeles Times story that opened by recounting how Obama intervened to resolve a dispute between the Chinese and French over the wording of a policy on tax havens. “For anyone looking for clues in Obama’s first appearance as president on the world stage about his view of the role, it was an illustrative moment,” the story said. “A few hours later, Obama talked at length with reporters about how he intends to deal with the rest of the world ‘forging a consensus instead of dictating our terms,’ and working cooperatively with other countries.”

An April 1 Politico story about Obama’s meetings with world leaders—including Russia’s Dmitry Medvedev—declared that,  “On a day of dizzying diplomacy…Obama made one thing clear: The Bush era of foreign policy is over."

The other major focus was on the President’s success—or lack thereof—in galvanizing cooperation for a global economic agenda. A report on the April 2 CBS evening newscast ticked off some areas of agreement, including $1.1 trillion earmarked for developing countries and tougher financial regulation. But as correspondent Chip Reid noted, “the President did not get everything he wanted. He was unable to convince many nations to devote more time to stimulus spending.”

The Economy at Home

A week earlier, the economic narrative focused on Treasury Secretary Timothy Geithner’s plan to deal with “toxic assets.” Last week, coverage of the financial crisis was more evenly spread among a larger number of subjects.  And due in part to the G-20 Summit, one significant component of the U.S. economic crisis last week (at 7%) was how problems here were affecting economies abroad. 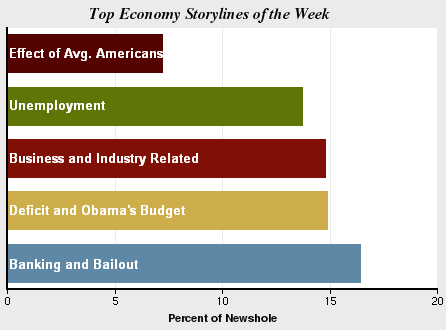 The top theme last week (filling 16% of the economic crisis coverage) was the troubled banking industry. This was driven in part by Federal Reserve Chairman Ben Bernanke making news by expressing his reluctant support for the bailout strategy.

“Federal Reserve Chairman Ben Bernanke spent 30 minutes Friday morning explaining—and defending—the central bank’s unprecedented interventionist strategy of the past 18 months,” said an April 3 story on FoxNews.com. “Bernanke acknowledged that the Federal Reserve was ‘extremely uncomfortable’ with recent emergency efforts employed to save Bear Stearns and American International Group…The interventions were necessary, however, to ward off systemic failures of financial systems around the world, he said.”

The No. 2 theme, at 15% of the economic newshole, was the federal budget followed (also at 15%) by the ripple effects of the crisis throughout the larger economy. And some of these stories dealt with the impact on a small sector of rich elites.

An April 2 Wall Street Journal article—headlined “Hollywood Squeezes Stars’ Pay in Slump”—reported that the movie business has stopped paying top talent a percentage of box-office revenues “from the first dollar the movie makes.”

“These ‘first-dollar gross’ deals are hitting the cutting-room floor as studios slash the number of movies they’re making,” the story stated, adding that actors Steve Carell and Harrison Ford recently “accepted ‘back-end’ deals, in which they get a portion of the gross, but only after the studio and its financing partners have recouped their costs.”

An Associated Press story talked about “a new economic order” in baseball “marked by fewer fans, rising ticket prices and likely lower player salaries. MLB is bracing for an overall attendance drop of as much as 7 percent following five straight years of 70 million-plus attendance…Even Yankees managing general partner Hal Steinbrenner admitted that some tickets at his new stadium would be a hard sell in a financial climate that’s the most uncertain since at least the deep recession of the late 1970s—and perhaps longer.”

One other industry that has felt the brunt of the recession was again in the headlines last week after the White House forced the exit of GM’s Wagoner. And the response in much of the media coverage was mixed.

“Some frustrated U.S. taxpayers cheered President Barack Obama’s tough steps to shore up the reeling auto industry on Monday but critics called his decision to fire General Motors’ chief a heavy-handed power grab,” noted a March 30 Reuters story posted on Google News. “Skeptics asked whether it was an early sign of a more activist administration or an isolated example…Experts called it potentially the most significant presidential intervention in the private sector since Harry Truman tried to seize the steel industry during the Korean War in 1952, only to be rebuffed by the Supreme Court.”

A National Journal story said many voters have little sympathy for Wagoner, but may want the President to get even tougher with Detroit. “No one thinks GM’s doing well, so why would they be upset to see the head honcho thrown out on his tail?” the piece stated.  But “Wagoner’s ouster alone likely won’t be enough make voters feel more comfortable about sending their tax dollars to Detroit.”

With Obama the focal point of overseas coverage last week, the President was a lead newsmaker in 20% of the stories examined. That represents his highest level of media exposure since the last week in February when he delivered a prime time speech and produced his first budget proposal. The next biggest newsmaker, at about one-tenth the coverage, was Michelle Obama (at 2%). Whether it was touching the Queen or invoking comparisons to Jackie Kennedy, the First Lady’s overseas activities were in the spotlight last week. 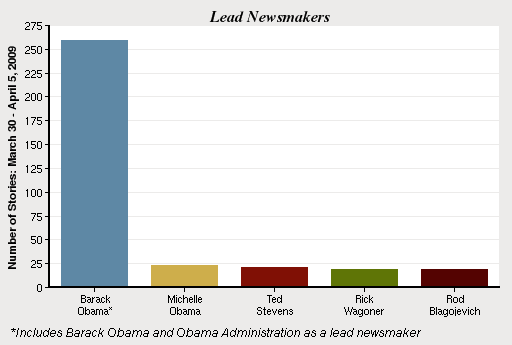 The No. 3 newsmaker, also at 2%, was former Alaska Senator Ted Stevens, who was convicted of corruption charges only days before he was defeated for re-election. Last week, the Justice Department, citing major problems with the prosecution, asked that the case be thrown out. (On April 7, a judge overturned the conviction.)

The fourth-biggest newsmaker last week, at 1%, was ousted GM boss Rick Wagoner.  And the No. 5 newsmaker (also at 1%) may find some solace in the latest twist in the Stevens case. Former Illinois Governor Rod Blagojevich, accused of trying to auction off Obama’s Senate seat, was indicted on 16 felony counts.

The week’s top three stories—the overseas trip, the economic crisis, and the troubled automobile industry—were interrelated and combined for more than half  the coverage studied from March 30-April 5.

From there, the drop-off in media attention was significant. The No. 4 story, at 4% of the newshole, was the April 3 shooting rampage at an immigrant center in Binghamton New York that left 13 people and the killer dead. Like many breaking news events, it generated the most coverage on cable news, at 9% of the airtime studied. On a different week, and without an economic crisis dominating the economy, such an event might have been bigger news. But a recent killing spree in rural Alabama where a man gunned down 10 people before killing himself accounted for a similar amount of coverage, 3%, from March 9-15. The scale of the carnage was considerably worse, but by way of comparison, the Virginia Tech shooting spree that left 33 dead filled 51% of the newshole the week of April 15-20, 2007.

Next at 2% of the newshole, was the war in Afghanistan, with some of that narrative focused on Obama’s efforts to generate more support from America’s NATO allies. While that was enough to make the conflict the fifth-biggest story, it represented a drop of more than 50% from the previous week when Obama’s plan to escalate U.S. involvement filled 5% of the newshole.

Terror in Mumbai Is Biggest Story