It takes an extraordinary story to burst into the news cycle in a week when the Senate rejected a lifeline to the American auto industry, companies from Sony to Bank of America announced stunning layoffs, and Barack Obama tapped his choice to tackle health care reform.

And with the sunrise arrest of Illinois Governor Rod Blagojevich on Dec. 9, that’s exactly what we had. It was a saga of cinematic dimensions—part Sopranos/part All the King’s Men. The governor of the fifth-biggest state was on tape allegedly and profanely talking about selling Barack Obama’s now empty Senate seat, and expressing a desire to use his office to peddle a lot of other things for personal gain as well.

“Blago-gate,” as it was instantly dubbed, filled more than a quarter of the newshole from Dec. 8-14, as measured by the News Coverage Index from the Pew Research Center’s Project for Excellence in Journalism. For all of 2008, it was the biggest weekly story not related to the election or economy. And it seemed to siphon media attention away from the week’s other big stories.

As a topic, coverage of the economy edged out Blagojevich when stories such as the auto industry, financial meltdown and holiday shopping are all combined. But last week’s economic coverage dropped noticeably from the week before. And coverage of the new Obama Administration, the next-biggest Dec. 8-14 storyline, plunged to less than half the previous week’s total. In a sign of its far-reaching tentacles, the media framed the Blagojevich bust as the Obama team’s first test of crisis management.

Just how big was the Illinois “pay to play” story last week? At 28% of the newshole, it generated more coverage than the Russia-Georgia war (26% from Aug. 11-17) and even topped what had been the messiest political scandal of the year, New York Governor Eliot Spitzer’s dalliance with a prostitute (23% the week of March 10-16). It was the No. 1 story online, on cable news, and in the radio sector and accounted for nearly half the airtime (44%) examined on cable last week.

The initial burst of coverage was fueled largely by the shocking nature of the charges and the words of the boyish-looking Blagojevich captured by wiretaps. The Chicago Tribune, for example, managed to get “stunning” “scoundrels,” “political corruption” and “unprecedented political crisis” into the very first sentence of its Dec. 10 story on the case.

But the spreading ripple effect of Blago-gate quickly became clear in the narrative, and about one-third of the scandal storyline focused on the Obama team. After a few days of vaguer statements on the subject, the President-elect pledged on Dec. 11 to make a public accounting of his staff’s contacts with the governor about the vacant Senate seat. But that, and the fact that he was not implicated in wrongdoing, did not dampen speculation about his handling of the matter. Nor did it silence the question of which key aides, most notably incoming Chief of Staff Rahm Emanuel, may have talked to the governor or his representatives about the Senate seat.

“Obama’s evolving response was the first test of his team’s capacity to cope with a fast-moving political scandal while staying true to his promise to run a transparent shop with a minimum of secrets,” concluded a Dec. 12 Los Angeles Times story, which quoted no less a scandal expert than Watergate-era White House counsel John Dean.

If the scandal surrounded the Obama transition team, it seemed to envelope another Chicago politician. Congressman Jesse Jackson Jr., a potential candidate for the Obama seat, had to call a press conference to proclaim his innocence. There was also a media angle with the allegation that Blagojevich sought to have Chicago Tribune editorial writers fired in exchange for the state helping the Tribune-owned Chicago Cubs franchise sell Wrigley Field. (It just so happened that the Tribune Co. also filed for bankruptcy last week.)

Even with all the ancillary players in the scandal, much of the media coverage focused on the fate of the man at the center of it. “While the chorus calling on Governor Rod Blagojevich to resign gets louder, the state’s attorney general is trying to force his hand,” noted ABC’s George Stephanopoulos on Dec. 12, the day Illinois Attorney General Lisa Madigan asked the state Supreme Court to remove the governor from power. “Will he resign?”

Though not as big as it had been, in another scary week the economy remained a major story. Overall coverage filled almost one-third of the newshole studied in the NCI—down from about 40% the previous week. The biggest component was the U.S. auto industry, which accounted for 18% of the newshole—about the same as the previous week. Attention to the financial crisis itself accounted for another 11% of the coverage, down from 20% a week earlier.

A key narrative in the Detroit drama was the $14 billion bailout vote on Capitol Hill. And that storyline became a more overtly partisan one when the measure was defeated by skeptical Senate Republicans.

“Republican opposition killed a $14-billion bailout plan in the Senate on Thursday night, putting the future of U.S. automakers in doubt and threatening to deliver another blow to the economy,” stated the Dec. 12 Los Angeles Times story. And by week’s end, the Bush White House, which had supported the subsidy, began talking about dipping into the Wall Street bailout money to help Detroit.

The human aspect of auto industry crisis was illustrated by a Dec. 11 USA Today story profiling Kokomo Indiana, home of the first American gas-powered car, the first carburetor and the first push button car radio. “Our entire community is tied to this industry,” the article quoted a local minister as saying. “If those plants close, you might as well plow everything over and return to farmland.”

When it came to the broader financial crisis beyond autos, roughly half of last week’s coverage was devoted to the impact on U.S. business, on jobs and on average Americans. And in a week when major cuts were announced at Dow Chemical, Sony, and Bank of America, some of that coverage was anecdotal and personalized—a micro look at a macro crisis.

On Dec. 10, for example, the CBS newscast reported on the employees at a dying restaurant in Elkhart Indiana, where the owner could no longer support a $3000 weekly payroll. “All across the country this is happening,” said the proprietor as he braced his shaken staff for the prospect of unemployment. “I know there ain’t too many jobs out there, but maybe we all should start looking for jobs.”

And as the crisis dragged on, intrepid reporters ranged further for angles. One piece that ran on the AP wire and generated some pickup, focused on a topless joint in a Detroit suburb that cut the price of a table dance as a nod to the floundering economy. Even the announcement of Jay Leno’s much-ballyhooed move into NBC’s prime time lineup next fall was viewed in an economic context. Many of the stories pointed out that the network would save millions by opting for a talk show format over dramas that require scripts and actors.

With Blagojevich commanding the headlines, coverage of the new Obama Administration from Dec. 8-14 fell to 8%, down from 18% the previous week. That represents about one-third of the attention the transition generated in the first few weeks after the Nov. 4 election. In essence, while much of the coverage seemed to suggest Obama had no culpability in the scandal, it nonetheless pushed the Administration-in-waiting lower in the newscast and front page and off message.

About half of last week’s transition coverage focused on Obama’s appointments and his approaches to the economy and health care. The biggest news on the economic front last week was the incoming President’s broad outline of his proposed economic stimulus package.

In a Dec. 8 Fox News story linking a one-day jump in the stock market to that news, anchor Shepard Smith said investors were “apparently optimistic” over Obama’s discussion of “the largest public works spending project in half a century [which] includes schools and mass transit projects.”

The week’s major appointment was the naming of former Senator Tom Daschle to head Health and Human Services, and the news that he will also be what Obama called the “lead architect” of his health care reform package. But in a reflection of what was dominating the news cycle, the President-elect opened the Daschle press conference by first addressing Blago-gate.

“I’m also aware of your interest in the matter of the Illinois Senate appointment,” Obama told the journalists, before ad 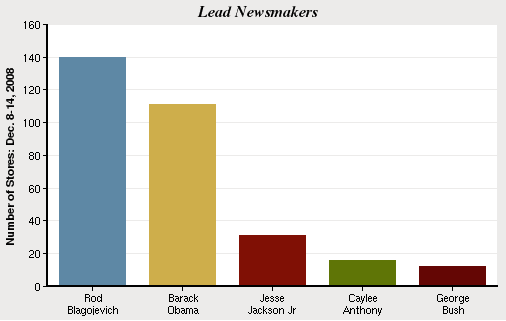 ding that “I’m confident that no representatives of mine would have any part of any deals related to this seat…I’ve asked my team to gather the facts of any contacts with the governor’s office about this vacancy so that we can share them with you over the next few days.”

The release of that material could be the next big chapter in both the Blagojevich and Obama transition stories.

He may have been largely unknown to most Americans before last week. But the embattled Illinois Governor with the “what me worry?” attitude and the schoolboy mop of black hair was the top newsmaker from Dec. 8-14, registering as a lead newsmaker in 10% of all the stories. Obama was next at 8%, and another figure caught up in the scandal, Jesse Jackson Jr., was third at 2%.

The fourth-leading newsmaker (1%) was, tragically enough, Caylee Anthony, the long-missing Florida toddler whose mother is charged with her murder. Last week, the remains of a small child were found close to Anthony’s home, raising the prospect she has finally been found. George Bush was next, showing up as a lead newsmaker in 1% of the stories.

Beyond the economy, the incoming president and the disgraced governor, there was once again little room in the news agenda. At No. 5 on the top story list was the possible breakthrough in the Caylee Anthony mystery, which accounted for 2% of the newshole. That was followed by coverage of terrorism issues (2%), with the news that five of the alleged 9/11 plotters wanted to confess. Coverage of global warming and the aftermath of the Mumbai terror attacks followed, also at 2%.

The No. 9 story, (2%), was the situation inside Iraq with the big event being the indictment of employees of the security firm Blackwater in connection with the deaths of Iraqi civilians. And rounding out the top-10 roster was the unrest in Greece that followed a police shooting that killed a teenager and accounted for 1% of the week’s coverage.

Weiner’s Bad Week is the No. 1 Story