It was a brutal week on Wall Street. The stock market plunged below 9,000 for the first time in five years. In the race for President, 66 million people watched John McCain and Barack Obama face off in their second debate, a town hall-style event, in Nashville.

Yet the media narrative of the campaign focused on tone and tactics last week, perhaps as the press searched for something that might alter the strategic dynamic of the race.

For the first time in a month, the 2008 campaign generated more coverage than the financial crisis (41% vs. 36%). And almost one-third of that election coverage was connected to the increasingly harsh tone of the campaign, according to the Oct. 6-12 Campaign Coverage Index from the Pew Research Center’s Project For Excellence in Journalism.

The biggest component of that storyline—attacks often focused on the candidates’ character and associations—accounted for 26% of the week’s campaign newshole. Most of them emanated from McCain and they included efforts to link Obama to 60’s radical Bill Ayers. As the week went on, the anger boiling up at Republican rallies also became part of the story. For his part, Obama reprised the Keating Five savings and loan-related scandal that ensnared the Arizona Senator two decades ago.

Another 3% of the campaign newshole was devoted to stories that examined the Ayers/Obama relationship. A smaller slice of coverage, less than 1%, took at look at McCain’s role in the Keating Five saga.

The second-biggest storyline was the Oct. 7 presidential debate, which filled 17% of the campaign newshole. But that was a big drop from the level of attention paid to the previous week’s vice-presidential debate, which filled about three times as much space. (The encounter between Sarah Palin and Joe Biden also attracted about 7 million more viewers than McCain-Obama II).

As a further sign that the economy is shrinking as a narrative in the media’s account of the presidential election, the candidates’ reaction to the meltdown on Wall Street and in the credit markets fell to the third biggest campaign storyline. Although some of the Oct. 7 debate also focused on that situation, the financial crisis has played an increasingly smaller role in the campaign narrative in the past few weeks. From Oct. 6-12, the candidates’ response to the crisis accounted for 9% of the campaign newshole, down from 15% the week before. 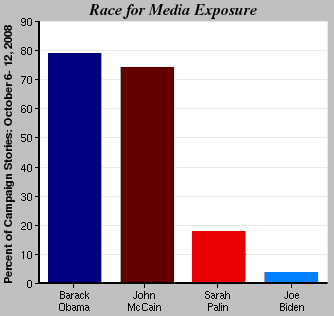 As polls show Obama gaining ground in his lead over McCain, strategy and tactics may be a growing factor in the coverage. Even excluding the candidates’ hard-hitting attacks, the horserace elements generally accounted for another 11% of last week’s campaign coverage. The top narrative in that category was coverage of the polls themselves, at 6%. The battle for swing states, tilting toward Obama in recent surveys, was next at 2%.

Last week also saw the re-emergence of the two men at the top of the ticket as the campaign’s principal newsmakers. Obama led the competition for exposure, registering as a significant or dominant factor in 79% of the campaign stories compared with 75% of McCain. In both cases, the presidential candidates virtually doubled their coverage from the previous week.

Conversely, Palin’s and Biden’s coverage dropped dramatically, once their debate had ended. The Alaska Governor was a significant or dominant factor in 17% of the campaign stories, down from 51% the previous week. Biden was a focus of just 6% of the stories, a drop from 30% the previous week.

With the rescue plan through Congress, and the candidates in full debate phase, the campaign received the most coverage last week, Oct. 6-12, since the first week of September—filling 41% of the space in print and online and time on radio and TV as measured by PEJ’s News Coverage Index. Yet that number also reflects a certain split in the media culture’s representation of the news at the moment. 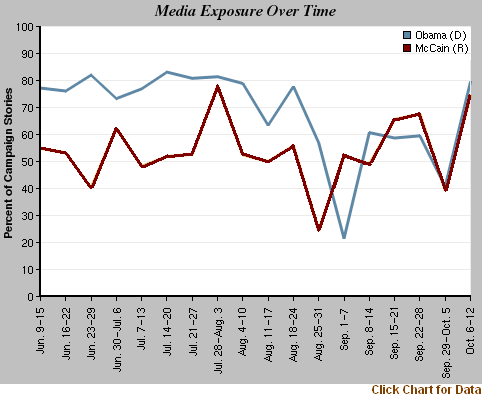 The presidential race was the No. 1 story in just two of the five media sectors last week. The economic meltdown dominated in newspapers, online and on network news. Yet that focus was offset by the intensity of election coverage in the two platforms that offer opinion-oriented talk and talking head shows. The campaign consumed 66% of the cable airtime studied last week and 55% of the radio newshole.

And with the outlines of the last lap of the race now apparently clear—Obama ahead and McCain chasing—much of the media spotlight shifted to the noticeably nastier campaign discourse.

Brit Hume’s Oct. 6 Fox News Channel program profiled attacks coming from both camps. It focused on McCain’s efforts to tie Obama to Ayers and to question the Democrat’s patriotism and character. And it looked at Obama’s attempt to link McCain to the Keating case in which five senators, including McCain, were accused of improperly protecting the chairman of the failed Lincoln Savings and Loan, who was eventually imprisoned.

Even when the candidates turned their attention to the dimensions of the crisis threatening the U.S. economy, it was often to unload on their opponent. An Oct. 10 story in the Arkansas Democrat Gazette stated that at an Ohio rally, “the Democratic candidate for president described his Republican opponent’s approach to the financial crisis as ‘risky” and “erratic,’ a word he used twice.” In response, the story added, McCain told voters in Wisconsin, “that Democrats [including Obama] were taking credit for the rescue package after standing by idly as the subprime crisis festered.”

As races play out, reporters on the ground often look for clues about what is happening before they might show up as trends in polls. Last week some reporters, noticeably in print, focused on the atmosphere at GOP campaign events, which may have been a reaction to the tone of the candidates’ ads and rhetoric.

An Oct. 9 Los Angeles Times report on a McCain and Palin rally in Pennsylvania said that “the edgy tone of the rally here was set even before the duo arrived onstage, when local Republican official William Platt warmed up the audience by twice referring to the Democratic nominee as ‘Barack Hussein Obama.’”

On her Oct. 9 CNN program, Campbell Brown showed footage of angry Republicans in a campaign crowd imploring McCain to attack Obama harder. “In recent days, we are seeing something we hadn’t seen before, which is rage at these events,” said correspondent Ed Henry. “This is raw emotion coming out from these Republican voters.”

Those political ramifications were also the subject of an Oct. 10 Politico story that talked about McCain having to calm some of his backers. “Fearing the raw and at times angry emotions of his supporters may damage his campaign, John McCain on Friday urged them to tone down their increasingly personal denunciations of Barack Obama,” the story stated, “including one woman who said she had heard that the Democrat was "an Arab."

And once again a presidential debate provided more evidence that the media and voters view these face-to-face encounters between candidates differently. As was the case with the first debate, the punditocracy basically called the debate a draw.

“Senators John McCain and Barack Obama punched and counter-punched on issue after issue throughout their second debate Tuesday night, but neither man knocked the other one down, much less out,” declared an account in the Atlanta Journal-Constitution that relied on the all too familiar fistic imagery.

And as was the case with the first debate, several post-debate snap polls indicated that viewers, unlike many commentators, saw Obama as the clear winner of the contest.

After three weeks as the No. 1 story, the financial crisis fell to the No. 2 slot last week, according to PEJ’s News Coverage Index. Coverage of the economic turmoil filled 36% of the newshole, a drop from 45% the previous week. Still, it was the top story on newspaper front pages, (42%), online (40%), and on network news (40%). The No. 3 story, at 2%, was about elements of the U.S. economy not directly related to the crisis, such as falling energy costs. That was followed by news from inside Iraq (1%) and the beginning of the new fall term for the U.S. Supreme Court, also at 1%.