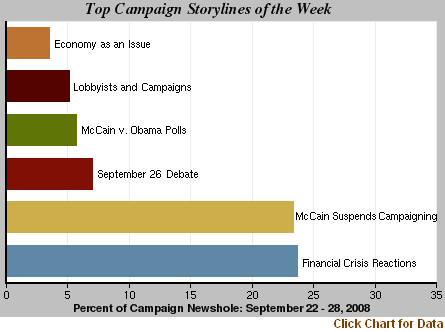 From the halls of the Capitol to the campus of Ole Miss, it was a week of high drama in the campaign.

The tension was driven by the intersection of two major storylines—the Administration plan to bail out the credit markets and the first presidential debate. And the drama of the week suggested that a national crisis and campaign for president do not easily mix. When it was over, the candidate who appeared to try harder to seize the moment may have had the tougher week.

After what the Sept. 28 Washington Post characterized as “A Wild Week on the Trail,” the paper ran a Page One headline that may have summed things up: “McCain Ready for a Change of Subject.”

For the second week in a row, what has been called the gravest economic crisis since the Depression generated more coverage than the election. It filled 40% of the time studied on television and radio and space in print and online for Sept. 22-28, according to the News Coverage Index from the Pew Research Center’s Project for Excellence in Journalism. And it further raised the possibility that the economy may frame the coming days of the election narrative.

The campaign was the No. 2 story of the week, filling 33% of the newshole. Within the campaign coverage itself, or PEJ’s Campaign Coverage Index, the No. 1 storyline last week, at 24%, was the candidates’ response to the situation. Right behind it, at 23% of the campaign newshole, was the narrative that stemmed from John McCain’s decision to suspend campaigning. The third-biggest storyline, at 7%, concerned the debate itself and the media post-mortems.

Who was driving the campaign coverage? For only the second week since the general election season began in June, the Republican presidential nominee was the top newsmaker. McCain registered as a significant or dominant factor in 69% of the campaign stories. That compared with 59% for Obama.

The reason was McCain’s midweek decision to suspend campaign activities, his return to Washington to participate in bailout negotiations and his call to delay the first debate. The press coverage tended to see all this as a major gamble by a candidate who, according to polls, had been losing ground to Obama as the economy emerged as the top issue. 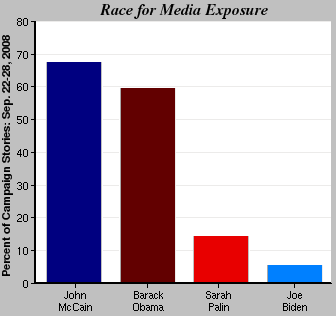 In the first few weeks after he selected Sarah Palin, McCain was overshadowed in the news by his running mate. But as McCain emerged as the top newsmaker in the last two weeks—a week earlier in part due to a gaffe over the economy—the media spotlight shifted from the Alaska Governor. Last week, Palin was a significant or dominant factor in 16% of the coverage, down from 26% the previous week and 53% the week before.

Last week’s drop in Palin coverage comes despite her interview with Katie Couric, which attracted considerable attention and some negative reviews, even among conservatives. Had the interview come at a different time, some media analysts speculated that this, generally considered Palin’s shakiest performance of the campaign, would have been a bigger story. Joe Biden, (at 7%) generated less than half as much coverage as Palin last week.

Late in the week, midday Friday, the attention focused back to Oxford Mississippi and the first presidential debate. When the media submitted their scorecards for a debate that had been watched by an estimated 57 million people, the verdict seemed decidedly mixed. Many called it a draw. But the public may have viewed the contest somewhat differently with several snap polls pointing to an Obama win. (See “Assessing the Debate: A Media/Public Disconnect ?”)

After the storylines involving the economic crisis and the debate, the fourth biggest campaign narrative—accounting for 6% of the coverage—was polling. (When all the themes related to tactics and strategy were combined, they filled 13% of the newshole). Earlier in the week, some of those polls showed Obama building a modest lead as the economic upheaval seemed to play to Democrats’ traditional strengths. By the weekend, surveys suggested a moderate post-debate bounce for Obama. 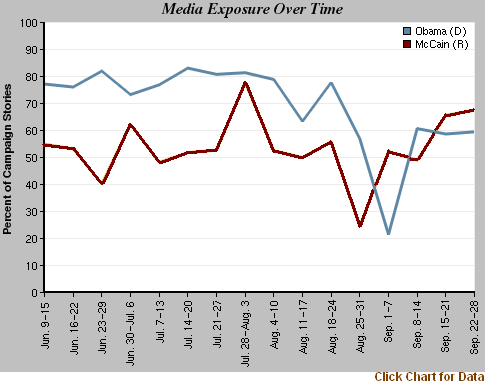 Overall, the 33% of the newshole filled by the campaign represents a small increase of two points from the previous week. The only media sector last week in which the campaign was the top story was cable news, where the race for the White House filled 51% of the airtime studied.

The week began with the two candidates trying to get a handle on both the politics and substance of the complex bailout negotiations. A Sept. 22 story on the CBS Evening News noted that McCain and Obama were both expressing concern about the deal and the need for greater oversight.

“It is not often that the two presidential candidates sound like they’re reading from the same talking points,” noted correspondent Chip Reid.

But then McCain’s moves gave the storyline a dramatic turn. “John McCain is a gambler by nature, and the bet he placed Wednesday may be among the biggest of his political life,” said the Sept. 25 Page One story in the Washington Post. “The Republican presidential nominee is hoping that his abrupt decision to suspend campaigning, seek a delay of Friday’s debate…and return to Washington to help prod negotiations over a financial rescue package will be seen as the kind of country-first, bipartisan leadership he believes Americans want.”

A day later, with Obama insisting he would appear at the debate, McCain agreed to participate as well. With the bailout plan still up in the air, the press tended to view McCain’s decision to debate as something of a retreat. A Sept. 26 CNN.com story announcing that decision said that “some fellow lawmakers said McCain hasn’t contributed much to the financial debate, and senior campaign advisers told CNN they believed it was politically crucial that McCain show up at the debate in Oxford, Mississippi.”

The stage was then set for the first direct public showdown between Obama and McCain. And the media and the public were apparently not in complete accord about what happened on that stage in Oxford.

Assessing the Debate: A Media/Public Disconnect?

Over on NBC, Tom Brokaw seemed to award the encounter to McCain based on his more aggressive posture. “John McCain bored in [on] Barack Obama,” Brokaw said, while expressing the view that the Democrat had failed to exploit certain openings. “I’m surprised he didn’t work harder at pinning McCain…to the Bush administration,” he added.

John Dickerson, of the online publication Slate, suggested that Obama had essentially won by holding his own. “Obama and McCain looked like equals onstage,” he declared. “He was firm in his beliefs and clear in his views on foreign policy.”

During the CBS post-mortem, Bob Schieffer seemed to speak for many media observers when he noted that both sides had their moments and that no one really dominated. “There was no knockout,” he declared.

The next morning, front pages all over America adopted some of that boxing lingo with headlines that seemed almost wistful that the candidates hadn’t bloodied each other more and the outcome had not been more clear cut.

“Candidates punch, dodge but stay in comfort zones,” read the headline in the Bangor Daily News.

“No Knockout Punch In Round One,” declared the Detroit Free Press.

But if the media referees were generally inclined to rule the debate a draw, the public didn’t see it that way, at least according to some early polls taken after the debate, including so-called “snap polls” designed to get an immediate reaction. In a series of surveys, people who watched the encounter thought the Illinois Senator had done better, fairly decidedly.

A USA Today/Gallup poll found that 46% of viewers said Obama had won the night in Oxford compared with 34% who favored McCain. A CBS/Knowledge Networks survey had Obama the winner by a 39%-24% tally while 51% of those surveyed for a CNN poll thought Obama had done better compared with 38% who gave the nod to McCain. One finding in a Bloomberg/LA Times poll of debate reaction was that by a 46%-33% tally, respondents thought Obama appeared more presidential than McCain that night.

These findings were buttressed to some extent by new horserace polls, including the trend lines in the daily “tracking” polls, that showed Obama enlarging his lead a bit, to somewhere between five and 10 points.

All of which may suggest that the media members were using a different set of judging criteria than the public. While some journalists saw McCain’s more consistent aggression and Obama’s more deferential approach as points in favor of the Republican, it is possible that viewers formed their initial opinions based on more psychological and less political cues—including Obama’s relaxed body language and McCain’s unwillingness to look directly at his opponent.

In the first paragraph of a Sept. 28 story noting this apparent discrepancy and reviewing the polling, Politico.com stated that, “Two days after a presidential debate many commentators scored as a tie, it’s beginning to look like the public saw things differently, as several polls show a small but significant post-debate boost for Barack Obama.”

The unfolding financial crisis constituted the week’s biggest story, according to PEJ’s News Coverage Index for Sept. 22-28. The story filled 40% of the newshole and was the No. 1 event in four media sectors—newspapers, online, network TV news and radio news. A breakdown of the narratives for the economic story last week found that more than half the coverage, 53%, was devoted to the political effort to forge a bailout bill. The No. 3 story, after campaign coverage, was the remnants of Hurricane Ike (at 2%.) That was followed by news about the economy that, believe it or not, was not directly related to the current crisis, also at 2%. The No. 5 story of the week again at 2%, was the continued turmoil and tension in Pakistan.