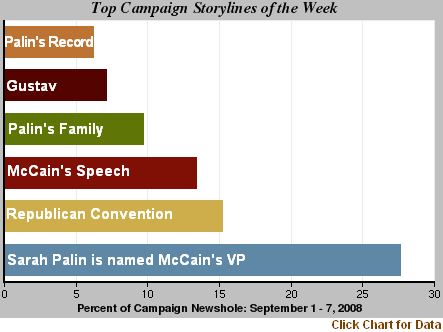 For the first time in the three months since the general election campaign began, John McCain last week generated more coverage than Barack Obama. But he was still outshone by another newsmaker during the GOP convention—his own running mate.

Sarah Palin, the first woman on a Republican ticket, was the focus of feverish attention as the media tried to find out more about her, convey her record and biography, and calculate her impact on the race. For the week of Sept. 1-7, Palin was a significant or dominant factor in 60% of the campaign stories, according to the Campaign Coverage Index from the Pew Research Center’s Project for Excellence in Journalism. McCain was fairly close behind, a significant or dominant factor in 52% of the stories.

Put another way, Palin enjoyed more coverage as a VP candidate during the GOP convention than Obama did a week earlier when he became the first person of color to accept the nomination for president of a major party. With the other ticket making most of the news, Obama was a focus in 22% of the stories last week, by far his lowest week of coverage in the general election season. His running mate Joe Biden registered at 2%.

The extent to which Palin commanded the spotlight last week is clear from the campaign storylines. Together, media narratives about McCain and the convention—including the proceedings themselves, Hurricane Gustav’s impact, McCain’s speech, and George Bush’s role—accounted for 43% of the campaign newshole. Palin themes, including reaction to her selection, her public record, her personal and family life, and the question of sexism—accounted for 45%.

What did the PEJ Index reveal about the nature of that coverage? Was it focused heavily on more sensational or personal aspects of the candidate? The single biggest Palin storyline (at 28%) was the response to her selection, which included her convention speech. Coverage of personal and family issues—from her daughter’s pregnancy, that she announced, to her husband’s DUI—was the No. 4 storyline at 10%. Her public record—which included the “troopergate” investigation and her use of federal earmarks—was No. 6 at 6%.

Another closely related storyline surfaced during the week, one that goes to the heart of Palin coverage. The contention of the McCain campaign—and many Republicans—that the media were engaging in an unfair feeding frenzy against her accounted for 1% of the campaign coverage. Some of that coverage took an introspective turn. (“The Media on Palin: Digging Up the Dirt, or Vetting a VP Hopeful?” was the headline on Howard Kurtz’s Sept. 8 Washington Post column.)

It’s far easier to ask that question than to answer it. According to the CCI data, the coverage of Palin’s family and personal life exceeded that of her political resume by a moderate margin. But not all aspects of her personal life can be reasonably considered off-limits to journalists trying to fill in the gaps about a candidate largely unknown now seeking the second-highest office in the land.

Coverage of Palin since she was introduced on Aug. 29 does reveal several major shifts in the trajectory of the story. The media, surprised by her selection, initially spent considerable time on the horserace, speculating on what Palin would mean for McCain’s chances and message. After she acknowledged her 17-year-old unmarried daughter’s pregnancy on Sept. 1—in response, the campaign said, to false rumors in the liberal blogosphere—the coverage changed. For two days, the media attention to personal aspects of her life and family spiked dramatically. As the week rolled on, the narrative changed again and Palin’s convention speech and ability to energize the GOP base became a significant part the coverage and the personal angle subsided.

By Sept. 5, someone other than Palin grabbed the media’s attention. McCain’s acceptance speech was by far the biggest storyline that day, marking the first time all week the nominee had the spotlight largely to himself.

Overall, coverage of the campaign accounted for 58% of the newshole, as measured by PEJ’s News Coverage Index for Sept. 1-7. That is smaller than the 69% of the newshole filled by the election during the week of the Democratic National Convention (Aug. 25-31). But that number might have been higher if Hurricane Gustav hadn’t become a major story, and it still represents the second-biggest week of 2008 campaign coverage. Looking at individual media sectors, the campaign accounted for 62% of the airtime on radio, 63% of the network newshole, and 73% of the cable coverage studied last week by PEJ. 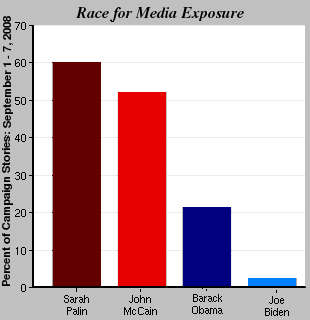 Going into the week of Sept. 1-7, the media were largely focused on the strategic impact of McCain’s stunning selection of Palin. “Campaigns Shift as McCain Choice Alters the Race,” was the Aug. 31 front-page New York Times headline. The one Palin controversy to emerge immediately was the trooper story—the investigation into whether she abused her power in firing the Alaska Public Safety head after he declined to dismiss Palin’s ex-brother in law.

The Sept. 1 announcement that Palin’s daughter Bristol was pregnant came after media interest was stirred up by unfounded speculation online that Bristol, not Sarah, was the real mother of Palin’s infant son. A contentious Sept. 1 interview between CNN’s Campbell Brown and McCain spokesman Tucker Bounds touched on the public and family elements of Palin’s life. In a clip that became a YouTube favorite, Brown asked Bounds about the pregnancy issue. Then she asked him to “explain to us why you think Gov. Palin is ready to be commander in chief.” When Bounds began talking about Obama, Brown responded that “you’re not answering my question.” The McCain camp, about to denounce the press for unfairness generally, responded by canceling an interview with Larry King.

The next day, an AP story posted on AOL News discussed Bristol Palin’s pregnancy and Todd Palin’s 22-year-old DUI charge in the context of the vice-presidential vetting process. “Since McCain publicly disclosed his running mate on Friday, the notion of a shoddy, rushed review has been stoked repeatedly,” the story stated.

After a day or so of intense coverage, the media’s behavior became a story. On Sept. 2, Fox News Channel correspondent Jim Angle said of the Bristol pregnancy story: “If the Obama campaign isn’t making an issue of this and the evangelicals are not making an issue of this, who is? It appears to be the media starved for news in advance of Palin’s speech to the convention.” The next day, Chicago Tribune cultural critic Julia Keller raised the question of “sexism” in the media’s coverage of Palin’s looks and parenting choices. Palin, rather than an unknown commodity, was now also being depicted in some quarters as victim of a media smear. 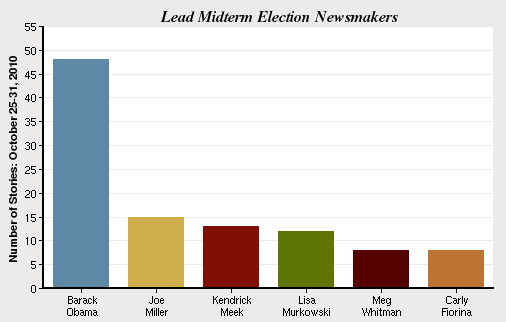 When the press became a target at the GOP convention, some of its members pushed back. The Politico’s Roger Simon wrote a sarcastic Sept. 4 column declaring that, “To hear from the pols at the Republican National Convention this week, our job is to endorse and support the decisions of the pols.”

The narrative would soon shift again, however, and by the later stages of the week, Palin’s successful Sept. 3 convention speech and her political impact were front and center in the storyline.

A piece posted that same day on CNN.com quoted a Kansas GOP official saying, “Sarah Palin can do a one-two punch better than Muhammad Ali… I think she has energized the Republican Party like we haven’t seen in a long time."

At week’s end, many media outlets were setting the stage for the two-month sprint to Election Day. An AP story in the Sept. 7 Modesto Bee noted that both presidential candidates had unified their parties by “reaching out to a female political figure.” In Obama’s case, that was Hillary Clinton. “McCain’s selection of Palin,” the story added, “proved most stunning and has the potential to change the game.”

Two meteorological newsmakers made the top five story list last week. Hurricane Gustav, the storm that affected the Republican National Convention, was the No. 2 story for the week of Sept. 1-7, filling 17% of the newshole, as measured by the NCI. (Its impact on that convention was also the fifth biggest campaign storyline last week.) The No. 3 story, at 4%, was Hanna, the storm that moved in after Gustav. Two staples of the news Index, events inside Iraq (2%) and the U.S. economy (1%) rounded out the roster of top stories last week.

How the Media Have Handled Palin’s Religious Faith