In a week that culminated with the introduction 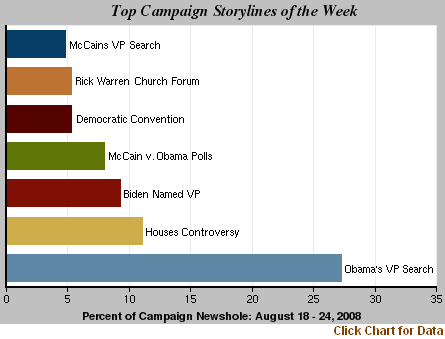 For the week of Aug. 18-24, speculation about Obama’s choice—which centered on Biden, Virginia Governor Tom Kaine and Indiana Senator Evan Bayh—accounted for 27% of all campaign news, according to the Campaign Coverage Index from the Pew Research Center’s Project for Excellence in Journalism. Reaction to the Biden selection, revealed on Aug. 23, accounted for another 9%. With John McCain expected to name his running mate on Aug. 29, that buzz—which focused largely on Mitt Romney—garnered another 5% of the coverage.

In all its incarnations, the veepstakes accounted for 42% of last week’s election coverage. No other storyline came close.

Thanks in part to the Biden announcement, Obama again generated significantly more coverage than McCain last week in the run up to the Democratic convention. Obama appeared as a significant or dominant factor in 78% of the campaign stories, compared with 56% for his GOP rival. Biden registered in another 13% of the coverage. And Hillary Clinton—who commands the loyalty of many Democratic delegates and whose convention performance will be intensely scrutinized—was a significant or dominant factor in 6%. In total, the percentage of campaign stories mostly about Democrats (45%) vastly outnumbered those about Republicans (18%).

The No. 2 storyline in last week’s coverage (at 11%) revolved around a McCain interview in which he did not know how many houses he owned. (The estimates have varied from between four and eight.) The Obama campaign seized on that comment to push the contention that McCain is out of touch with working-class America. That prompted a response from the McCain camp, in turn, attempting to link Obama’s home purchase to convicted Chicago developer Tony Rezko. But much of the media commentary suggested that McCain suffered the more serious damage in the exchange.

Campaign polls, which included further signs that the race might be tightening, were the No. 4 campaign story (at 8%).

All this was enough to push coverage of the policy debate to a minimal level. The top issue, the economy, accounted for only 3% of the coverage followed by Iraq, at 2%. Combined, the key issue differences between the candidates accounted for only 8% of the coverage in a week when the veepstakes, a flap over houses, and polls filled 61% of the newshole. By way of comparison, the debate over issues during the week of Aug. 11-17 consumed almost one-quarter of the campaign coverage.

Last week’s campaign stories seem to affirm a trend in the coverage seen throughout this election. It has often been episodic and event driven, with little evidence of a continuing narrative. In the 11 weeks since the general election began in early June, there has been a different top storyline every week, with one exception—Obama’s overseas trip which was No. 1 for two weeks. From Aug. 11-17, for example, the biggest theme was the candidates’ positions on the war between Russia and Georgia, which accounted for 14% of the campaign coverage. This past week, that theme virtually vanished, accounting for less than 1% of the coverage.

After being eclipsed the week before by the war in Georgia, coverage of the campaign rebounded last week, filling 35% of the overall newshole, as measured by PEJ’s News Coverage Index. That comes only a week after the election filled 21% of the newshole and was the No. 2 story—the Georgia crisis was at 26%—for the first time in nine months. Last week, the campaign was the No. 1 story in every media sector except network TV, where NBC’s extensive coverage of the Olympics helped make that the top story. The campaign accounted for 60% of all the cable airtime and 46% of the radio time studied last week. 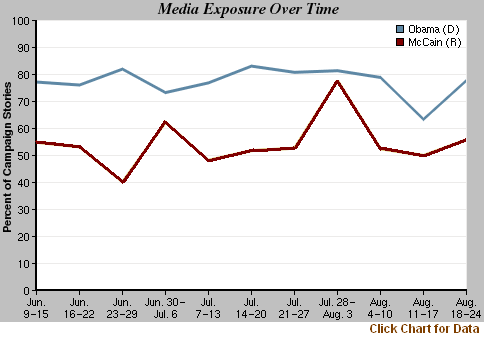 In a week marked by the intense anticipation of Obama’s vice-presidential pick—and media stakeouts of the top contenders—the guessing game seemed to narrow to one candidate by the end of that week.

On the Aug. 22 CBS newscast, chief Washington correspondent Bob Schieffer—a man not given to wild speculation—reported that Obama was looking for someone he could be comfortable with and a partner to “add heft to the ticket.”

That same night on MSNBC’s Hardball, NBC correspondent Andrea Mitchell, when asked what she knew, declared: “We know it’s probably Joe Biden. All the signs are pointing to that,” she added, reporting that Kaine and Bayh had been informed by the Obama team that they would not be on the ticket.

Over on the liberal blog, The Huffington Post, the Biden boomlet was also building. “Prediction Market Bets on Biden” was the HuffPost headline referring to the overwhelming choice of buyers on the political trading market, Intrade.

Biden’s official unveiling came the next day at a rally in Springfield, Illinois. Despite the expected partisan squabbling over the choice, the analysis from much of the mainstream media seemed similar. The Aug. 24 story in the Philadelphia Inquirer—virtually the hometown paper of the Delaware Senator—captured the consensus that Biden added foreign policy credentials and an appeal to blue collar voters, but made Obama’s change argument more difficult and posed an ever-present risk of an off-message utterance.

Biden “shores up the perceived weaknesses of the 47-year-old Obama, who, in his first Senate term, lacks significant foreign-policy or legislative experience” the Inquirer story said.

In one memorable incident early in the campaign, Biden had to apologize to Obama after calling him “first mainstream African-American [candidate] who is articulate and bright and clean.” The Inquirer story addressed Biden’s well-known proclivity for impolitic statements by noting that his “mouth also just keeps going, He’s blunt and sardonic…The downside to his fluency is that Biden also has a long history of verbal gaffes.”

The second biggest story behind the campaign was the closing week of the Beijing Olympics, which accounted for 10% of the newshole as measured by PEJ’s News Coverage Index for Aug. 18-24. (Coverage of the Games was down from 14% the week of Aug. 11-17.) That was followed by the conflict between Russia and Georgia which fell to 8% of the coverage after accounting for 26% the previous week. Next came coverage of the persistent tropical storm Fay (7%), which continued to batter Florida with rain and winds. And in the week when Pakistani President Pervez Musharraf, once a staunch U.S. ally in the war on terror, resigned under threat of impeachment, the political turmoil in Pakistan was the No. 5 story, filling 5% of the newshole.

Note: As a result of Beijing 2008 Olympics special MSNBC programming for the week of August 18-24, MSNBC’s daytime programming and Race for the White House did not air as normal and were excluded from our dataset. Also due to a technical error particular to August 19, we included CNN’s Anderson Cooper 360 instead of Lou Dobbs for that evening.