The wars in Iraq and Afghanistan, in 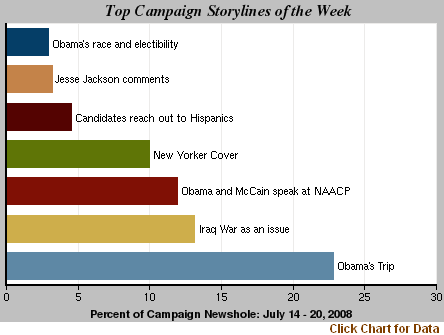 various dimensions, retook center stage in the campaign for the presidency last week.

In a period that began with speeches on foreign policy by both candidates and ended with Barack Obama traveling to the Middle East, more than one-third of the campaign coverage focused on Iraq and Afghanistan and Obama’s trip, according to the Campaign Coverage Index of Pew Research Center’s Project for Excellence in Journalism for the week of July 14-20.

The week was also the sixth straight since the general election began in which Obama, the presumptive Democratic nominee, enjoyed a distinct advantage in the race for exposure over the presumptive Republican nominee, John McCain. Last week, Obama was a significant presence in 83% of campaign stories studied, vs. McCain in 52%. (To be a significant presence in a story, 25% of the story must be about that person.)

That advantage for Obama is only slightly higher than what he has enjoyed throughout this early phase of the general election period. In the six weeks since Hillary Clinton suspended her campaign and the general election phase began, Obama has been a significant factor in 78% of the stories and McCain in 51%. The closest they have come in coverage was the week of June 30 through July 6, when Obama enjoyed an 11 percentage point advantage (73% of stories about Obama vs. 62% for McCain). 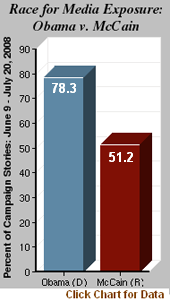 There were some other storylines in the campaign last week. After Obama’s trip (23% of the campaign newshole) and Iraq as an issue (another 13%), came the appearance of the two candidates before the NAACP (12%) and controversy over a satirical New Yorker magazine cover (10%).

Overall, the campaign filled 27% of the newshole in PEJ’s Campaign Coverage Index (CCI), once again more than any other topic.

The week began with two other stories looking as if they might capture the campaign narrative. On Sunday, the press began talking about a controversial New Yorker magazine cover, which showed Obama in Muslim garb and wife Michelle carrying a machine gun. On Monday night, MSNBC’s Countdown with Keith Olbermann was hosting a conversation about it. Guest host Rachel Maddow, a liberal radio talk show host, asked Newsweek’s Jonathan Alter whether it was mistake because “way too many believe these allegations.” Yes, Alter agreed, noting that about “13% of the people believe at least some of the lies about Sen. Obama.”

Even Rush Limbaugh got into the mix: “Man, these people cannot take it,” he said, incredulous at how much attention it was getting. “See, liberals have no sense of humor.”

One other storyline that started the week out as sizable was the appearance of both candidates at the annual convention of the NAACP. That narrative began as a continuation of the debate from a week earlier prompted by the Rev. Jesse Jackson criticizing Obama for arguing that black Americans should take more personal responsibility for their problems.

Soon much of the coverage of the NAACP convention related to McCain, both because he spoke to the convention (in contrast with some past GOP candidates) and because he used it as a platform to reach out to moderate voters.

But soon both the New Yorker story and the NAACP story began to be supplanted by other concerns, particularly Iraq. On Monday, an op-ed by Obama appeared in the New York Times repeating his call for a phased redeployment of troops from Iraq over 16 months, with some troops moving to Afghanistan: “We should seize this moment to begin the phased redeployment of combat that I have long advocated….”

Within hours, the attention turned to McCain’s response, in which the older, more senior Senator criticized Obama for advocating positions before he had visited Afghanistan and Iraq, a trip that was now in the offing. The tone, in keeping with McCain’s past arguments about Obama’s naiveté, suggested the Democrat didn’t know what he was doing. “In my experience, fact-finding missions usually work best the other way around. First you assess the facts on the ground. Then you present a new strategy.”

By Wednesday, the trip gained even more media momentum when three network anchors decided to accompany the 46-year-old Democratic Senator on the journey, and now the media were in full anticipation of the Obama trip. Page One of the Thursday New York Times was writing about the feelings of Iraqis toward the Democratic nominee. “Everyone in Iraq likes him,” the paper quoted Iraqi general Nassir al-Hiti as saying.

Soon there were other storylines branching out. Was the media too obsessed with Obama? Would McCain ever get such star treatment? Was there hidden risk for Obama in making the overseas trip? The Guardian newspaper in England likened the anticipation to the Beatles’ first trip to North America. 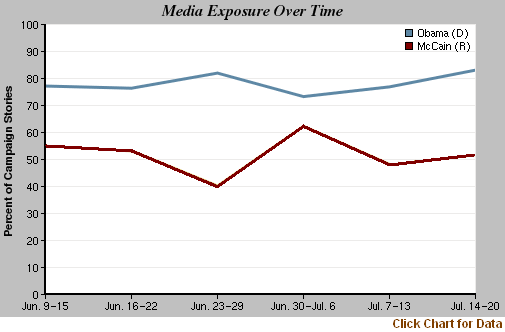 Some predicted Obama was making a tactical error with the trip, because he would find in Iraq that Bush’s sure policy was such a success. On Friday July 18, former CIA analyst Michael Scheuer was telling O’Reilly Factor guest host E.D. Hill that, “I think Iraq especially is going to be a lose-lose situation” for Obama. “If he finds the reporting about the surge being successful is true, then he basically aligns himself with Mr. Bush and Mr. McCain. If he criticizes it, he doesn’t just take on these two men, he also takes on General Petraeus and the whole U.S. military.”

As the week ended, however, two events unfolded that seemed to break Obama’s way and dampen the perception that the trip would backfire. First, President Bush and Iraqi Prime Minister Nouri al-Maliki agreed on a “time horizon” for the withdrawal of U.S. combat troops from Iraq as part of a “long-term security accord.” Then, on Saturday, Maliki told a German magazine that he supported Obama’s 16-month redeployment proposal. “That, we think, would be the right timeframe for withdrawal, with the possibility of slight changes,” Maliki said, referring to Obama by name.

In response, the frustration at the White House became even evident when, according to ABC’s Martha Raddatz, a White House employee, intending to send a Reuters account of the Maliki quotes internally around the White House, accidentally hit the wrong button and sent it instead to an extensive distribution list of White House reporters.

“News in hot spots appears to aid Obama,” read a headline on Politico.com, closing the week. The posting, by Jonathan Martin, claimed that “Obama’s long-awaited and much-hyped trip overseas…seems to have come at the perfect time as recent events in Afghanistan, Iraq and Iran have played into his message.”

Whether the trip proves ultimately a success or not, the early run up in other words broke Obama’s way.

After the campaign, a series of economic issues filled the news agenda last week. The No. 2 story of the week was the state of the U.S. economy (9% of the newshole), followed by the troubles of major U.S. financial institutions such as Fannie Mae and Freddie Mac (9%), the price of gas and oil (5%), and the debate over ways to find new sources of energy (3%). That represents an interesting twist. All four of these are economic storylines, and together fill 26% of the newshole. That is one of the few weeks this year that any subject—or related collection of topics—rivaled the campaign in media attention.