If the Rev. Jesse Jackson feared his own 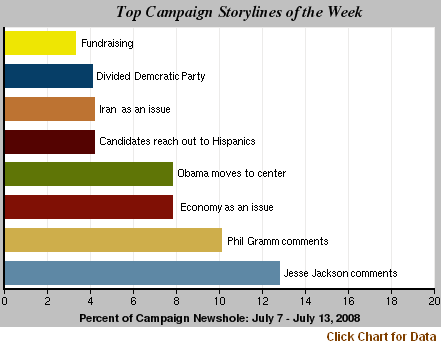 historic runs at the presidency in 1984 and 1988 were being ignored this year in coverage of the presumed Democratic nominee Barack Obama, he need worry no longer. But be careful what you wish for.

Jackson’s derogatory remarks about Obama, made when he thought he was off camera and off mike while preparing to appear on a Fox News program, was the biggest campaign storyline in the media last week, according to the Project for Excellence in Journalism’s Campaign Coverage Index.

And as the media portrayed the incident, in which Jackson sharply criticized Obama for suggesting that black men need to take more responsibility for children born out of wedlock, it may well have proven to be a boon to Obama, not to Jackson.

It was not the only statement by a non-candidate to steer the campaign narrative last week. The comments by John McCain economic advisor, former Senator Phil Gramm, that the country’s economic problems are mostly a “mental recession” in the minds of whiny consumers, was the second-biggest storyline last week. Indeed, together the two gaffes comprised nearly a quarter of the campaign coverage studied (23%).

One other trend to emerge last week was that Democrat Obama again received more coverage than Republican McCain. Obama was at least a significant presence in fully 77% of the campaign stories studied, compared with 48% for McCain. Obama has led in coverage in all five weeks since the race narrowed to two presumptive nominees. A week earlier, that gap narrowed to 11 points and offered the prospect that the coverage might equalize, but last week suggested that might not be the case. If this trend continues, it hints that the media narrative could make this race largely a referendum about Obama and whether the country is willing to make him the next President, with John McCain playing the role of the alternative.

The Jackson brouhaha filled 13% of the campaign narrative studied last week. The Gramm remarks filled 10%. The other top campaign storylines last week in the media narrative were the economy (which was connected to the Gramm statements). It filled 8% of the newshole studied. Next came coverage of Obama moving to the ideological center on issues (8%). That was followed by competition for the country’s Hispanic vote (4%), Iran as an issue (mostly the response to that country’s missile tests), and divisions among Democrats (mostly relating to the retirement of Clinton’s campaign debt).

Overall, the campaign filled 29% of the newshole studied by PEJ last week. For the year to date the campaign has accounted for 37% of the overall newshole.

During the primary season, the principal focus of the Campaign Coverage Index was on the competition for exposure among the candidates. That was measured by the number of stories in which a candidate played a significant role (as a subject of between 25% and 50% of the story) or a main newsmaker role (at least 50% of the story). Now, in the general election season, the CCI is also highlighting another dimension of the coverage, the campaign storylines of the week, the specific themes that make up the campaign coverage. They are measured as a percentage of overall coverage, or newshole. We will continue to track the quantity of coverage generated by the leading candidates. The CCI is an addition to PEJ’s News Coverage Index, which tracks all the topics in the news and which will continue to appear at the bottom of the CCI.

The dubious week for Jackson and Gramm made them minor stars in the coverage. Jackson was featured in 14% of the campaign stories studied, and Gramm in 6%.

The Jackson comments happened on July 6 when the former presidential candidate and civil rights leader was preparing to make an appearance on “Fox & Friends.” While on the set, but not yet on the air, Jackson, thinking his mike was off, whispered that Obama “was talking down to black people,” and then Jackson used a phrase that suggested he wanted to castrate Obama.

The comments went unnoticed until a Fox News employee working the overnight shift caught them while transcribing the tape. On Tuesday, a producer for “The O’Reilly Factor” was alerted to them, and the network decided to contact both Jackson and the Obama campaign before airing the footage on Wednesday evening. Jackson appeared on CNN Wednesday afternoon to apologize before the footage even ran.

The press struggled with how to deal with a comment that involved castration. “Eeeeeww!” MSNBC’s David Shuster said while guest hosting “Verdict with Dan Abrams” on July 10. “I’m glad it wasn’t me trying to figure out how to describe it.”

Fox’s Bill O’Reilly made a point of noting that they would only show portions of the comments and not use all the words as proof that he was being fair, while suggesting that had a conservative used such language it would have aired in full on rival news channels. “As most people know the Factor has been tough on Jesse Jackson, holding him accountable for what he does in the public arena—and even investigating his financing—but we are not out to hurt the man in personal ways.”

What also stood out was the sense that Jackson’s gaffe helped Obama because it distinguished him as a different kind of black leader, perhaps of a different generation, willing to criticize African Americans for being responsible for some of the community’s problems. Several journalists even compared it to Bill Clinton criticizing rap singer Sister Souljah to distinguish himself form the Democratic left. 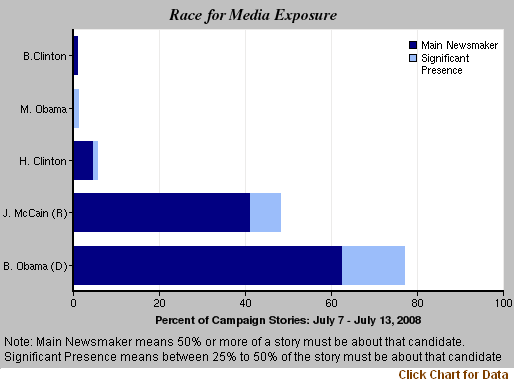 “Barack Obama leads a charmed life,” Dan Balz wrote in the Washington Post July 10. “He finally had his Sister Souljah moment and didn’t even have to show up. Jesse Jackson did it for him solo.”

On Fox, Newt Gingrich went even further. “I don’t think that Obama needs a Sister Souljah moment. I think that he is a much more reasonable and moderate politician (than Clinton). I think he doesn’t have to prove that he’s free of the left.”

The Jackson remarks even blended into another storyline to which they were not directly connected, the idea that Obama was moving to the political middle ground to improve his electoral prospects. Some critics, both left and right, raised the question of whether this was smart politics, or signs of flip-flopping, a storyline that is likely to continue.

If Jackson’s gaffe helped Obama, there was little such sunshine for John McCain. Gramm’s comments came in an interview for the Washington Times newspaper that appeared on July 9.

"You’ve heard of mental depression; this is a mental recession," he said, noting that economic growth has held up at about one percent. "We have sort of become a nation of whiners. You just hear this constant whining, complaining about a loss of competitiveness, America in decline," he said. "We’ve never been more dominant; we’ve never had more natural advantages than we have today.”

With some exceptions, such as Sean Hannity on Fox, the coverage of this was predominantly negative for McCain.

“When your top economic adviser is talking about a nation of whiners (at a time) when your message this week is ‘I feel the pain of the average American’ – not so hot,” Jeff Greenfield told Katie Couric on the CBS Evening News July 10.

“Well, Lou, when I first called the McCain adviser about Phil Gramm’s comments, there was an audible, beleaguered sigh on the other end of the phone. McCain aides knew right away this hurt their effort at message control,” CNN’s Dana Bash told host Lou Dobbs that same night.

So far, the coverage suggests that gaffes and misstatements will play a significant role in the coverage—even those that don’t come from the candidates. The Gramm and Jackson comments follow coverage of comments by McCain advisor Charlie Black about terrorist attacks helping his candidate. Obama’s comments about bitter blue collar Americans and those of Rev. Jeremiah Wright are two other examples.

But not all gaffes receive the same kind of coverage. At Primanti Bros., a popular hangout in Pittsburgh, McCain last week ordered a cheesesteak and then invited questions from reporters. When asked about the increase of exports to Iran, specifically cigarettes, he quipped, “Maybe that’s a way of killing them. (Laugh) I meant that as a joke. I say that as a person who hasn’t had a cigarette in 28 years…(Looks at wife) 29 years.”

McCain then said he’d look into the issue more and have a better answer later. But in a week when Jesse Jackson was more brutal, and Phil Gramm wasn’t kidding, McCain’s joke, which he all but took back in the next breath, barely registered in the coverage studied here.

Following the campaign, a host of other stories received far less coverage this week. The second biggest story was the economy in general (unrelated to the campaign), which filled 7% of the newshole studied. That was followed by Iran’s missile testing and the political fallout (5%), the price of gas and oil (5%), and the wildfires in California and events in Iraq, both filling 3%.