As the historic 2008 presidential primary season came to an end, the presumptive Republican and Democratic nominees faced similar dilemmas. Both Republican Sen. John McCain (Ariz.) and Democratic Sen. Barack Obama (Ill.) decided to sever ties with controversial religious figures who had been backing their campaigns.

As the general election campaign got under way, both candidates continued to face questions related to their religious backgrounds. Obama’s decisions to relinquish his membership with Chicago’s Trinity United Church of Christ and to sever ties with its controversial former pastor, the Rev. Jeremiah Wright, could influence voters’ opinions of him, especially since he is a relatively new figure in national politics. And McCain’s ability to turn out the conservative religious base of his party could be a deciding factor in how he fares in November. Indeed, religion could be at least as important in the 2008 presidential campaign as it was in 2000 and 2004. 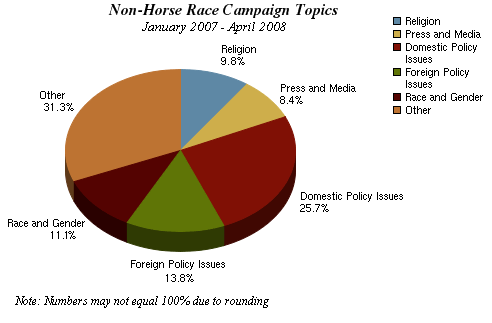 So how might the media cover the issue of religion in the 2008 general election? To help address that question, the Pew Research Center’s Project for Excellence in Journalism and the Pew Forum on Religion & Public Life analyzed the coverage of religion in the campaign through the majority of the primary season, a 16-month period from January 2007 through April 2008.

The study finds that when coverage of the “horse-race” aspects of the campaign is excluded, religion emerges as a relatively prominent topic, accounting for 10% of the non-political-process during the 16 months studied. In fact, religion garnered nearly as much coverage as race and gender combined (11%), even though the front-runners for the Democratic presidential nomination were a black man and a woman.

Overall, however, religion stories, along with other substantive and policy issues, took a back seat to campaign tactics and political strategy, which together garnered 81% of the coverage. So despite the attention paid to Obama’s former pastor, questions about McCain’s relationship with his party’s conservative religious base, interest in Mitt Romney’s membership in the Church of Jesus Christ of Latter-day Saints and the surprisingly strong campaign of former Baptist preacher Mike Huckabee, only 2% of the campaign stories directly focused on religion.

When the coverage did turn to religion, it often did not deal directly with questions of faith but instead focused on more familiar territory. For instance, when Obama gave a speech to quell concerns over the controversial statements of his former pastor, both the campaign and the press steered the emphasis toward the race angle of the story.

Meanwhile, questions about McCain’s association with controversial pastor John Hagee, whose endorsement he once courted, received very little coverage – political or otherwise – during the 16 months studied. Even with respect to Romney – for whom religion was a significant issue from the start of his campaign – faith-related coverage focused largely on one moment: his December 2007 address on “Faith in America.”
These findings suggest a continuing discomfort among news organizations in tackling deep questions of how candidates’ personal faith may influence their public leadership. When the press does cover such stories, it tends to focus on discrete events – such as a speech, video or TV appearance – rather than the underlying connections, and often the coverage is fairly short-lived.

The study examined a total of 13,386 campaign stories from January 2007 through April 2008 in 48 different mainstream news outlets from print, online, network TV, cable and radio, including talk shows. Of these, the study did further analysis on the 252 religion-focused campaign stories.
In addition, the study includes a more in-depth chronological assessment of coverage of the two largest religion-related events of the primary campaign—Obama’s and Romney’s major speeches on religion, race, and civil liberties. This “etymology” of the events, traces how these two stories developed in the press and the extent to which religion was a part of the candidates’ narratives at all.

Read the main report: Running on Faith: Study Finds Media Coverage of Religion in Primary Campaign Rivaled That of Race and Gender Combined

Read the etymology: Two Speeches, One JFK moment? Newspaper Coverage Leading up to Obama’s and Romney’s Addresses on Faith