If we are in the summer doldrums—the 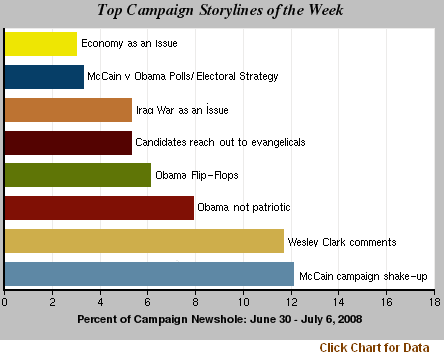 period when campaign-weary Americans tend to choose the beach and fireworks and tune out politics and campaigns—that might be good news for Barack Obama and John McCain. Because last week’s campaign narrative sure didn’t offer much that was positive.

The dominant theme of the week’s election coverage revolved around the candidates’ problems—or perceived problems—and had both men on the defensive. The single biggest story was McCain’s decision to shake up his top campaign staff by elevating Steve Schmidt, a close ally of Karl Rove, to a bigger operational role. That development—covered in the context of growing concern about the direction of McCain’s campaign—accounted for 12% of the campaign newshole studied, according to PEJ’s Campaign Coverage Index for June 30—July 6.

The most heavily covered story about Obama focused on his efforts to again assert his patriotism (8% of the newshole) in the face of stubborn rumors and speculation to the contrary. Another 6% of the coverage was devoted to whether Obama was—on issues from gun control to Iraq—rushing toward the political center. Or, to put it in more unflattering terminology, whether Obama was flip-flopping. Those three story lines combined accounted for more than one-quarter (26%) of all the campaign coverage last week.

Another major story line—and controversy—that involved both campaigns was General Wesley Clark’s remark that, "I don’t think riding in a fighter plane and getting shot down is a qualification [for McCain] to be president." In the dustup that followed, the McCain campaign counterattacked and Obama distanced himself from Clark. Factor in coverage of that flap (12% of the newshole), and the broad theme of headaches for the two campaigns accounted for nearly 40% of the coverage.

In another race last week things did tighten up, though it may not really be so welcome for the beneficiary, McCain. Thanks in part to his staffing reshuffle, McCain was competitive with Obama in the contest for media attention last week—the first time that has happened in the month since the general election season officially began. The Republican was a significant or dominant factor in 62% of the campaign stories compared with 73% for Obama. (The previous week, Obama led the competition for media exposure by a two-one margin.)

Hillary Clinton, who a week earlier was at least a significant presence in 32% of the stories after she and Obama had their joint New Hampshire rally, plummeted to 2% last week. Husband Bill Clinton generated more coverage (5%) than she last week, largely because he and Obama spoke on the phone after weeks of speculation about hard feelings between them.

With much of the attention focused elsewhere, coverage of the candidates’ differences on specific issues dropped to 13% of the newshole last week compared with 21% the previous week. The top policy story was Iraq (5% of the newshole), followed by the economy (3%), terrorism/security (2%) and energy (2%). (Immigration, gas prices and guns/crime each accounted for less than 1%.) Coverage of the energy issue, which had been driven by the debate over offshore oil drilling, fell to about one-sixth the level of the previous two weeks.

During the primary season, the principal focus of the Campaign Coverage Index was on the competition for exposure among the candidates. That was measured by the number of stories in which a candidate played a significant role (as a subject of between 25% and 50% of the story) or a main newsmaker role (at least 50% of the story). Now in the general election season, the CCI is also highlighting another dimension of the coverage, the campaign storylines of the week, the specific themes that make up the campaign coverage. They are measured as a percentage of overall coverage, or newshole. We will continue to track the quantity of coverage generated by the leading candidates. The CCI is an addition to PEJ’s News Coverage Index, which tracks all the topics in the news and which will continue to appear at the bottom of the CCI.

Overall, coverage of the campaign accounted for 26% of the newshole as measured by PEJ’s News Coverage Index for June 30-July 6. That confirms a pattern that has emerged ever since the Democratic nomination battle was resolved in early June. From Jan. 1, 2008 through June 8, 2008, the campaign, on an average week, filled 39% of the newshole. In the month since then, it has averaged 25% of the weekly newshole, a 36% decrease. Clearly, the early summer is proving to be a period when media attention to the race is cooling noticeably. Despite that, the campaign still was the top story in all five media sectors, and received the most attention (49% of the airtime studied) on cable. 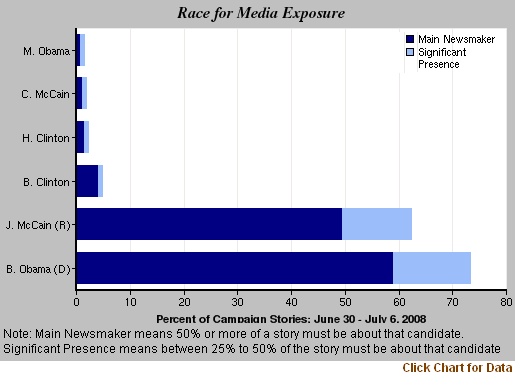 For McCain, the big news of the week was the July 2 reshuffling at campaign headquarters, a move that usually invites media scrutiny of the internal problems that forced the change. (When McCain shook up his team in 2007, some of the media took that as further reason to write what proved to be a premature campaign obituary.)

In much of the coverage, the effective elevation of Steve Schmidt over campaign manager Rick Davis was reported as evidence of a floundering effort. “The abrupt shift in leadership…came after weeks of complaints from Republicans outside the campaign and growing concerns within it about the lack of a clear message, the cumbersome decision-making process, the sloppy staging of events, and a schedule driven largely by fundraising priorities rather than political necessity,” said the Washington Post’s page-one story on June 3.

If McCain was busy retooling his campaign staff, Obama was refining his message, a move also portrayed in numerous stories as an attempt to fix a problem.

A June 30 CNN.com story noted how Obama had “defended his patriotism” at a Missouri campaign stop, emphasizing his “deep and abiding love for this country.” By way of explanation, the story noted, “Obama has been defending his patriotism ever since the beginning of the primary season, when he was first criticized for not wearing a flag pin – which he now does much more frequently – and when false rumors began circulating that he did not say the Pledge of Allegiance.”

There was another Obama story line last week that posed some peril for the candidate. That was the idea that he was shifting positions on a number of major issues, including how quickly he would withdraw troops from Iraq. With the screen caption reading “Middle Ground,” the July 3 ABC evening newscast highlighted what appeared to be changes in Obama’s view of the Washington D.C. gun ban, domestic surveillance legislation, and especially Iraq.

“Obama is getting a lot of questions about where he stands on Iraq,” said anchor Charles Gibson. “Obama has made change the theme of his campaign. Some critics think he’s changing his positions not only on Iraq, but on a number of issues.” Added correspondent John Berman: “It comes as a risk for Obama.”

Also proving risky for Obama was General Wesley Clark’s appearance on CBS’s “Face the Nation” on June 29. When discussing the candidates’ qualifications, host Bob Schieffer noted that Obama had never “been in a fighter plane and gotten shot down.”

"I don’t think riding in a fighter plane and getting shot down is a qualification [for McCain] to be president,” Clark, an Obama supporter, responded. Days later, that comment, and Clark, were still making news.

“I would never diss the service of anyone who served in the U.S. Armed Forces,” Clark explained July 1 on CNN’s Situation Room. “I was a Captain in Vietnam [who] came home on a stretcher…four bullet wounds in me.” But as the story played out in the press last week, Clark’s attack on McCain at the very least was an unwanted distraction for the Obama campaign.

After the campaign coverage, the No. 2 story of the week was the dramatic hostage rescue in Colombia that brought freedom to a group including three Americans and former Colombian Presidential candidate Ingrid Betancourt. That event accounted for 8% of the overall newshole as measured by PEJ’s News Coverage Index for June 30-July 6. It generated the most coverage in the online sector, where it filled 11% of the newshole. The next biggest story was gas and oil prices (7%), which did best in the radio sector, at 12% of the airtime. That was followed by a related subject, the U.S. economy, at 5%. The No. 5 story of the week (at 4%) involved the California wildfires that threatened a number of communities, including that iconic symbol of Golden State splendor, Big Sur.

Note: Due to the July 4th holiday, the following shows did not air as normal and were not included in our weekly Index: the July 3 editions of MSNBC’s Hardball; the July 4 editions of CNN’s Election Center, Fox News’ Hannity and Colmes and MSNBC’s Race for the White House and Countdown with Keith Olberman.

Near Campaign’s End, It’s All About Numbers

McCain vs. Obama on the Web