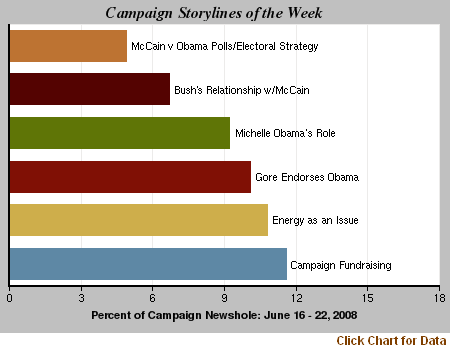 A key narrative in last week’s campaign focused not on Barack Obama and John McCain themselves, but on two people whose public roles reflect crucial challenges facing the candidates—Michelle Obama and George Bush.

Since Obama is a relatively unknown quantity to many Americans, his wife, Michelle, is virtually certain to be scrutinized for clues to his character and philosophy. She may come to represent a proxy for whether Obama can establish a comfort factor with enough voters to win the White House.

For McCain, the challenge is whether he is too closely tied to an unpopular incumbent President in George W. Bush.

Both of those storylines were evident last week in the coverage. The role of Michelle Obama filled 9% of the campaign newshole, according to PEJ’s Campaign Coverage Index for June 16-22. And President Bush’s relationship with the GOP hopeful filled another 7% of the newshole.

That was enough to account for nearly one-sixth of the campaign coverage studied by PEJ’s weekly news index. (For the record, Cindy McCain’s role also accounted for 4% of last week’s coverage. Some of it involved her responding to questions about Michelle Obama. And there was even a mini-flap over allegations that the potential GOP First Lady borrowed a cookie recipe she submitted to Family Circle magazine.)

Together, these storylines exceeded in scale the more basic campaign news events last week. The big policy debate in the news was the argument over energy and offshore drilling, which filled 11% of the campaign newshole. Coverage of fundraising, driven by Obama’s decision to opt out of public financing, accounted for another 12%. And Al Gore’s endorsement of Obama made up 10% of the coverage.

The Gore endorsement is one reason why, for the second week in a row, Obama generated considerably more coverage than his rival McCain. From June 16-22, the Democrat was a significant or dominant factor in 76% of the campaign stories compared with 53% for McCain—numbers very similar to the previous week. Hillary Clinton registered in only 4% of the coverage last week.

This week’s report marks a change in emphasis for the Campaign Coverage Index. During the primary season, the principal focus was on the competition for exposure among the candidates. That was measured by the number of stories in which a candidate played a significant role (as a subject of between 25% and 50% of the story) or a main newsmaker role (at least 50% of the story). Now that the general election season has begun, the CCI is also highlighting another facet of the coverage, the campaign storylines of the week, the specific themes that make up the campaign coverage. They are measured as a percentage of overall coverage, or newshole. We will also continue to track the quantity of coverage generated by the leading candidates. The CCI is an addition to PEJ’s ongoing News Coverage Index, which tracks all the topics in the news and which will continue to appear at the bottom of the CCI.

Overall, the campaign accounted for 23% of the overall newshole in the week of June 16-22, equaling the lightest week of coverage in 2008 to date, according to PEJ’s News Coverage Index. During the final week of the long Democratic nomination fight (June 2-8), the campaign accounted for a full 50% of all coverage. But in the two weeks since then, that level has dropped significantly, suggesting an early-summer easing of press attention to the initial phases of the general election. The campaign last week was the No. 1 story in the newspaper, cable and radio sector. But while it only accounted for 12% of the front-page newspaper coverage, the race again got a big boost from the extensive attention in cable (47% of the newshole studied) and radio (33%) platforms.

For much of last week, Michelle Obama felt the hot glare of the media spotlight. An Ivy League-educated lawyer and key surrogate for her husband, she had already generated an ongoing controversy for campaign remarks during the primary season that included the phrase “for the first time in my adult lifetime, I’m really proud of my country.” Some critics interpreted that comment as evidence of a lack of patriotism. One popular rumor, officially debunked by the Obama campaign, claimed that a tape existed showing her making angry statements about “whitey.” 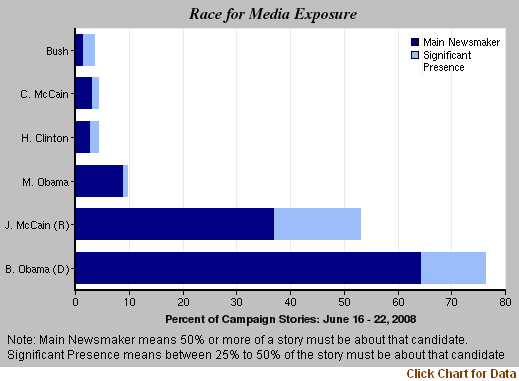 Last week, the focus was on whether the potential Democratic First Lady was undergoing an image remake. She was shown embracing her husband on the cover of Us Weekly magazine with the headline: “Why Barack Loves Her.” And a June 18 front-page New York Times story that reported on accusations that “she simmers with undigested racial anger,” bore this headline: “After Attacks, Michelle Obama Looks for a New Introduction.”

Part of that new introduction was a June 18 appearance on “The View,” a show that is something of a rite of passage for celebrities, and particularly female celebrities, in the news. There she engaged her co-panelists in a “fist bump,” the gesture she executed with her husband on the night he claimed the Democratic nomination—one that caused an overheated commentator to ask whether it was some kind of terrorist greeting.

A June 19 Today show segment—captioned “Image Control”—more explicitly examined the campaign’s effort to re-introduce Michelle Obama to America. Or as the report put it, to sell “the Michelle Obama brand.” In an interview with historian Doris Kearns Goodwin, co-host Meredith Vieira noted that “some people says that [Obama is] unpatriotic, an angry black woman.” Goodwin, who compared her stylistically to Jacqueline Kennedy, argued that Michelle Obama could overcome those concerns by being visible and open. “I think the more we know,” Goodwin observed, “then the less that little comment [“proud of my country”] will stick up like a mountain.”

If Obama seems a remarkably appealing, gifted speaker, but hard to know, it may be that people around him—from his wife to possibly others—will continue to be examined as a way to answer the question: Who is Barack Obama—really?

For his part, presumptive Republican nominee John McCain’s challenge involves navigating his relationship with his party’s leader, President Bush. McCain has, at times, sought to distance himself from an unpopular President whose approval ratings have hovered around 30%. The complexity of that relationship was apparent last week as McCain released an ad declaring how he “stood up” to Bush on global warming while the two men took the same position on offshore oil drilling.

The June 17 edition of MSNBC’s Hardball highlighted the Bush issue when the panel reviewed several new ads. One, by the candidate himself, stressed independence, declaring that “John McCain stood up to the President and sounded the alarm on global warming five years ago.” That message ran head on into the theme of a new ad by the liberal group MoveOn.org that featured actor John Cusack.

Ticking off issues on which McCain and Bush agreed, Cusack said, “You think you can tell President Bush apart from John McCain…Go to MoveOn.org and take the Bush-McCain challenge. Bet you can’t tell them apart.”

That subject was the focus of a June 17 front-page New York Times piece declaring that “The Democrats like to say that electing Senator John McCain would usher in the third term of George W. Bush…The Republicans counter that calling the senator McBush is political spin and that Mr. McCain is his own man.”

The story concluded that on the economy, staying in Iraq and health care, McCain’s “stances are indeed similar to Mr. Bush’s brand of conservatism.” But “on the environment, American diplomacy and nuclear proliferation, Mr. McCain has strikingly different views from Mr. Bush.”

“On balance,” the article continued, “the McCain campaign has sought to emphasize the differences…rather than the similarities.”

While it was the No. 5 storyline of the campaign last week, there seems little doubt that McCain’s relationship with Bush will endure as a continuing narrative—particularly one that Democrats may want to emphasize all the way to Election Day.

For the second week in a row, the violent storms and deadly flooding in the Midwest generated major attention from the media. For the week of June 16-22, it was the No. 2 story, filling 16% of the overall newshole as measured by PEJ’s News Coverage Index. The destructive weather was the top story in two sectors last week—online (23%) and network news (22%). That was followed by gas and oil prices (6%) and the U.S. economy, also at 6%. Rounding out the top 5 story list was the U.S. effort in fighting terrorism (4%), a topic driven by several events, most notably the passage by the U.S. House of Representatives of a new terrorism surveillance bill.