In the first official week of the general 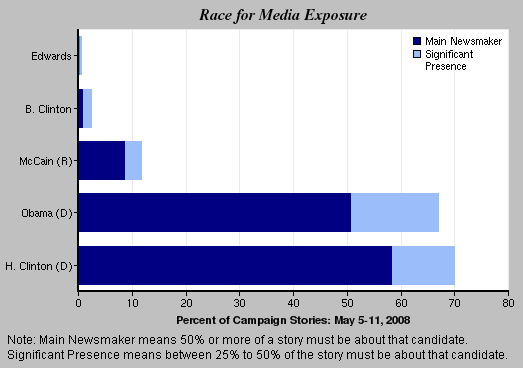 election, the differences between Barack Obama and John McCain on issues ranging from the economy to Iraq constituted the media’s main campaign narrative. Together, the debates over several key issues accounted for almost one-third—29%—of the campaign newshole, as measured by PEJ’s Campaign Coverage Index for June 9-15.

But that didn’t mean there wasn’t a fair amount of attention paid to some controversies and gaffes. Led by coverage of the resignation of Obama’s vice-presidential search leader James Johnson, a handful of controversies finished second behind the issues (at 18%) as a narrative theme last week. Trailing in third place (at 13%) was coverage of the candidates’ efforts to heal the wounds left by the primary battles—particularly the bruising Democratic contest.

In a relatively light week of campaign coverage, Obama topped McCain in the race for exposure. The Democrat appeared as a significant or dominant newsmaker in 77% of the week’s campaign stories compared with 55% for the GOP candidate. The week also represented the moment that Hillary Clinton appeared to finally recede from center stage. A week removed from her withdrawal speech, Clinton was a significant or dominant factor in only 10% of the stories.

Those numbers reflect the media’s full pivot away from the long Democratic primary battle to a one-on-one general election competition. A week earlier, Clinton registered in 60% of the coverage while McCain was at 21%. One other change was the focus on potential First Ladies. In that previous report, Michelle Obama registered at only 1%; last week, she accounted for 6%.

With the general election race perhaps heading into something of a summer plateau, campaign coverage last week accounted for only 24% of the overall newshole, according to PEJ’s News Coverage Index for June 9-15. That marks the second-lowest total for all of 2008, trailing only the week of April 7-13—which was part of the long run-up to the Pennsylvania primary—when it filled 23% of the newshole. Even on a relatively slow week, however, the election was the No. 1 story in four of the five media sectors, with the Midwest flooding finishing as top story on network TV. And once again, cable news led the way, devoting 39% of the airtime studied to the campaign.

The focus on issues last week may mark a shift in the campaign, at least for now, away from the horse race—will Clinton drop out, will there be reconciliation—toward the emphasis on the two party nominees trying to contrast themselves. Those policy questions were led by the economy (18% of the newshole), and also included gas prices (6%), Iraq (5%), and health care and immigration (both less than 1%). In general, our sense was that this coverage distributed fairly evenly between the two candidates. 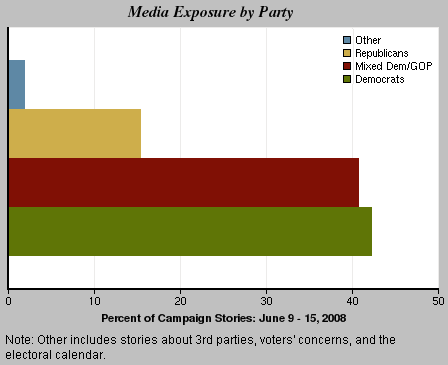 But an examination of the second category of narratives last week—campaign controversies and gaffes—helps explain, at least in part, Obama’s advantage in exposure. Here, Obama made most of the news. The situation involving James Johnson, who resigned amid questions about his business dealings, was the biggest brouhaha. By itself it accounted for 11% of the week’s campaign coverage. Stories about Obama rumors—including his campaign’s decision to start a web site to combat false allegations—and his relationship with the Rev. Jeremiah Wright accounted for another 5%. McCain made news too, but to a much smaller extent. Coverage of his relationship with controversial pastor, Rev. John Hagee, and questions about his ethics accounted for 2% of the coverage.

So while Obama dominated the coverage last week, some of that was clearly unwelcome—the result of an embarrassing flap over Johnson and the continuing fallout from a tough and polarizing primary fight that left many hard feelings.

The Campaign Coverage index is an addition to PEJ’s NCI report, which tracks what stories the media covered in the previous week. The CCI offers a greater level of detail of the campaign coverage. That includes the percentage of stories in which a candidate splayed a significant role (as a subject of between 25% and 50% of the story) or a main newsmaker role (making up at least 50% of the story). The Index also identifies the key narratives in the reporting and the “Line of the Week,” a statement from a journalist or source that in our researchers’ estimation seems either to capture the story or is particularly colorful. PEJ’s News Coverage Index will not disappear. It will come at the bottom of the CCI.

The next day, the Arkansas Democrat Gazette featured a front page that included a story about gas hitting four dollars a gallon, a story about how high gas costs are impeding state road repairs, and a story about McCain and Obama arguing over economic policy. 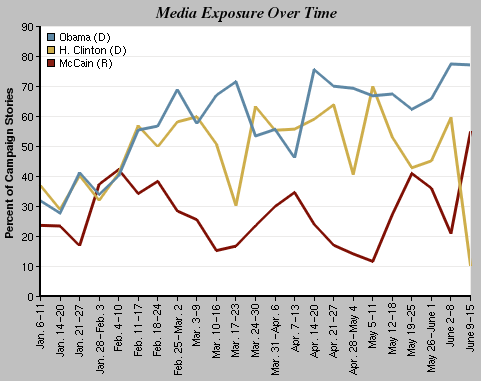 “The centerpiece of McCain’s economic plan ‘amounts to a full-throated endorsement of George Bush’s policies,’ Obama told about 900 people in Raleigh, N.C.,” the article reported. “McCain pushed back, saying Obama’s bid to end the Bush administration’s tax cuts for upper-income Americans would only worsen the already struggling economy.”

Some coverage of Iraq policy differences revolved around McCain’s June 11 appearance on NBC’s Today show. When host Matt Lauer’s asked if he had a better sense of when U.S. troops could return from Iraq, McCain said, “No, but that’s not too important. What’s important is the casualties in Iraq.” That brought a quick response from the Obama campaign with his surrogate, Senator John Kerry, charging that those remarks showed McCain to be "unbelievably out of touch and inconsistent with the needs and concerns of Americans."

Although that exchange illustrated substantive policy differences between the two candidates, it was also examined for its potential political impact on programs such as the June 11 edition of MSNBC’s Hardball. There the rough consensus of the pundit panel seemed to be that McCain had not chosen his words wisely, but that he benefited from any discussion of national security.

Yet the controversy over Obama aide James Johnson also boiled for a good part of the week. The veteran Washington insider left Obama’s vice presidential search team on June 11 after what the New York Times called “days of intense scrutiny” from the media and Republicans over favorable mortgages he received from Countrywide, “a central player in the subprime lending crisis.”

Johnson’s departure, the June 12 Times story declared, “highlights the difficulties” Obama has “in trying to live up to his promises to remain independent of the Washington establishment and the special interests that populate it.”

The challenges Obama faces in his search for a VP were not limited to the Johnson story last week. A June 9 CNN.com piece discussing the reluctance of some Clinton voters to support Obama cited a poll indicating that only 60% said they would vote for him in November. “Some of Clinton’s top supporters,” the story went on to note, “say the best way to get the New York Senator’s 18 million voters behind Obama is by putting Clinton on the ticket.”

Aside from the campaign, flooding in Iowa, the sudden death of a television news icon, and a major Supreme Court ruling were among the top stories last week, according to PEJ’s News Coverage Index for June 6-15. The violent Midwestern storms, the No. 2 story, filled 10% of the newshole last week. Rising gas and oil prices came next at 7%. That was followed by coverage of the June 13 death of NBC Washington bureau chief and Meet the Press host Tim Russert, at 5%. Due to extensive tributes and remembrances, especially on MSNBC where he frequently appeared, Russert’s passing filled 18% of the cable airtime examined last week. And the Supreme Court’s 5-4 ruling that terror suspects at Guantanamo Bay had the right to challenge their detention, viewed as a rebuke of the Bush administration, rounded out the top 5 stories, also at 5%