Last week, a major part of the media 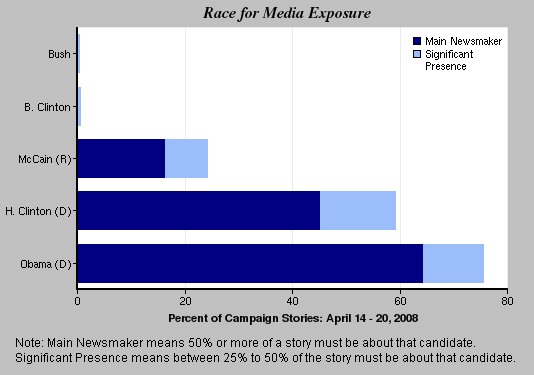 narrative about the 2008 campaign involved the media themselves—specifically ABC’s Charles Gibson and George Stephanopoulos and the April 16 debate they moderated in Philadelphia.

Two major story lines drove press coverage in the last full week before the long-awaited Democratic Pennsylvania primary. The first was continued fallout over Obama’s remarks that some economically struggling citizens get “bitter” and “cling” to guns or religion. That subject accounted for 25% of all the campaign coverage last week.

The second major story line, which accounted for another 22% of the coverage, was the ABC debate, which sparked its own debate over whether Obama bore the brunt of too many gaffe and “gotcha” questions. Washington Post TV critic Tom Shales, among the critical reviewers, criticized the moderators’ performances as “shoddy” and “despicable.” New York Times columnist David Brooks spoke for the opposing view when he lauded the questions, declaring that the “journalist’s job is to make politicians uncomfortable.”

In either event, the controversy marked the clearest example of the media being injected into the middle of the campaign since the much-criticized Feb. 21 New York Times story suggesting an improper relationship between John McCain and a female lobbyist.

Given his central involvement in both major story lines, Obama was the top newsmaker according to the Campaign Coverage Index from April 14-20. He was a significant or dominant factor in 76% of the campaign stories, a large leap from the previous week when he registered at 46%. Clinton, at 59%, trailed Obama, but even that was up a bit from her 56% total a week earlier.

After watching his media coverage climb recently, GOP candidate John McCain fell back to 24% last week, a drop of 11 points from the week before. (All told, the Democrats generated almost six times as many stories as the Republicans last week.) For McCain, that coverage was mixed. He received substantial attention for the economic plan he unveiled on April 15. But as the week went on, McCain found himself dealing not with fiscal policy, but with two lingering personal issues—his age and his temper. 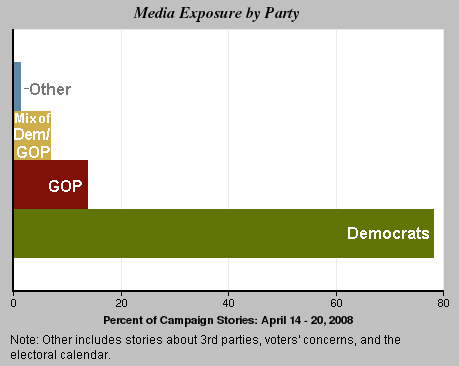 By filling 31% of the overall newshole as measured by PEJ’s News Coverage Index for April 14-20, the campaign bounced back from the previous week, when it accounted for only 23%—the low water mark in 2008. It was the top story in four of the five media sectors, with the Pope’s visit topping the online coverage. And once again, the election story was driven by the intense coverage on cable—where it accounted for 51% of the airtime studied—and radio, where it filled 39%.

In recent weeks, with journalists decamped in Pennsylvania for a long single-state campaign, the media narrative has often shifted focus from one candidate to another. One week, a major question is whether Obama is tough enough to engineer a victory in a fierce and grueling campaign. Another week, the key issue is whether Clinton will listen to calls for her to drop out. One week, the media focus on the incendiary remarks of Obama’s pastor, Rev. Jeremiah Wright. The next, the spotlight shines on Clinton’s erroneous recollection about dodging snipers on a Bosnia trip.

But this week, even as Obama generated more of the coverage, the two candidates were intertwined in the two big story lines. Obama’s “bitter” sentiments brought criticism from Clinton and a counterattack from Obama. A similar dynamic prevailed after the controversial debate, an event that both candidates tried to use as ammunition against the other.

The “bitter” comments quickly descended into a bitter fight between the Democratic rivals, as chronicled in the April 14 Philadelphia Inquirer. After Clinton called those remarks “elitist and divisive,” and expressed support for gun owners, Obama struck back by asserting that “She’s talking like she’s Annie Oakley,” a reference to the famed female sharpshooter of the Old West. One night later, the CBS Evening News reported that a new Clinton ad playing on the controversy was part of a strategy “to hammer Obama relentlessly,” while the Illinois Senator fought back with a $2 million per week ad blitz of its own. 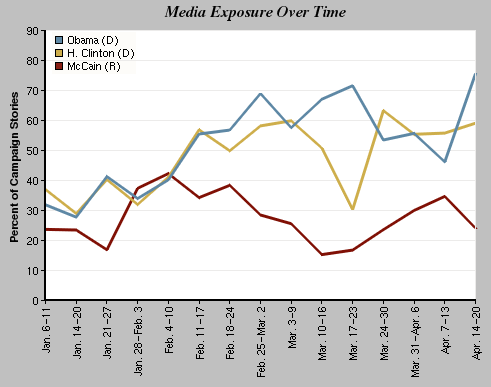 The April 16 debate quickly engulfed not only the candidates, but the moderators too. With Obama frequently on the defensive—facing questions on everything from his failure to wear a flag pin to his relationship with Rev. Wright and former radical William Ayers—the encounter triggered considerable criticism in the mainstream media and blogosphere. “This was by far, the worst handled debate in the history of politics,” declared one poster on the ABC News web site. The uproar was loud enough that on April 18, the New York Times ran a story headlined, “Who Lost the Debate? Moderators, Many Say.”

Obama’s complaints about the lack of substantive questions in the debate triggered another skirmish between the candidates. Above a caption that read, “Democrats Gripe About Griping,” CNN’s Wolf Blitzer noted on his April 18 show that “Hillary Clinton now suggests Barack Obama isn’t tough enough to be President based on his reaction to some difficult debate questions.” That elicited a countercharge of “blatant hypocrisy” by the Obama camp, which cited Clinton’s complaint at a previous debate that she was always being asked the first question. By week’s end, the debate over the debate had become another of the increasingly hostile exchanges between the two candidates.

McCain made his own news last week by unveiling an economic plan on April 15 that included a temporary repeal of the federal gas tax during the summer, increasing the income tax exemption for dependents and cutting spending. In a lukewarm, at best, assessment on the NBC Nightly News, correspondent Kelly O’Donnell noted that “critics and some economists argue that McCain’s math is wrong.” The next day, the 71-year-old McCain found himself responding to remarks made by 75-year-old Democratic Congressman John Murtha that the presidency is “no old man’s job.”

On Sunday April 20, the Washington Post published a page-one story examining McCain’s “temperament”—aka temper. The piece—which began with a five-paragraph account of a heated confrontation between McCain and fellow Senator Charles Grassley in 1992—weighed whether McCain’s famous temper made him “an erratic hothead” or “a firebrand who is resolute against the forces of greed and gutlessness.” There is little doubt that the question will be explored further by the media in the general campaign.

Pope Benedict XVI’s six-day trip to the U.S.—which included his dramatic meeting with victims of the clergy sexual abuse scandal—was the second biggest story of the week, filling 16% of the overall newshole, according to PEJ’s News Coverage Index for April 14-20. (At 22% of the newshole, it was the top story online.) Next came coverage of the Texas polygamy raid (8%), which last week included the custody fight over more than 400 children removed from the compound. The economy followed at 5% of the newshole, just ahead of coverage of events inside Iraq, which registered at 3%.