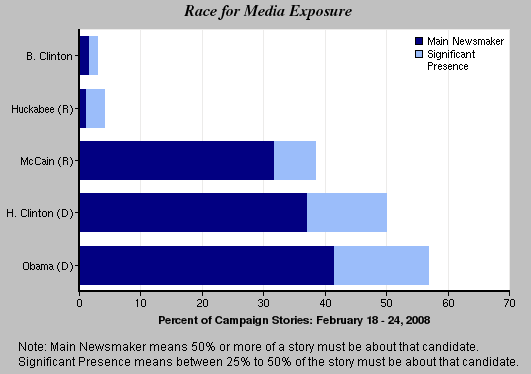 Barack Obama cementing his frontrunner status with the media in the Democratic primary fight, it ended with the New York Times coming perilously close to writing Hillary Clinton’s campaign obit on page one.

Beneath the grim headline “Somber Clinton Soldiers On as the Horizon Darkens” was a story that offered this passel of pessimism on Sunday, Feb. 24: “Morale is low. After 13 months of dawn-to-dark seven-day weeks, the staff is exhausted. Some have taken to going home early — 9 p.m. — turning off their BlackBerrys, and polishing off bottles of wine, several senior staff members said.”

With their grueling primary battle possibly heading toward the endgame, Democrats dominated campaign coverage by about 2-1 in the period last week, which stretched from the day before the Wisconsin primary to three days after the big Texas debate. Obama, who ran his post-Super Tuesday winning streak to 11 primary contests, won the race for media attention last week. By appearing as a significant or dominant factor in 57% of all campaign stories, he attracted his highest level of coverage since the Campaign Coverage Index was launched in January. And although she trailed him, by registering in 50% of last week’s coverage, Clinton generated her second-highest total.

But it was Obama’s impressive 17-point win in the Feb. 19 Wisconsin primary that was expected to be competitive that determined the Democrats’ media narrative last week. That narrative primarily wondered whether Clinton had anything left in her arsenal to impede Obama’s path to the nomination. When the commentariat generally judged their Feb. 21 debate as a draw, that was widely viewed as a tactical win for Obama. The conventional wisdom now held that Clinton had to do something dramatic to shake up the race.

Even though the Republican contest was effectively resolved on Super Tuesday, John McCain was a significant or dominant factor in 38% of last week’s campaign news. It’s an impressive total that he owes largely to one story—the controversial Feb. 21 New York Times story bearing the headline, “For McCain, Self-Confidence on Ethics Poses Its Own Risk.”

The story alleged that during the 2000 presidential campaign, McCain’s advisors became concerned about an inappropriate relationship between the Senator and a female lobbyist. So they “intervened to protect the candidate from himself” by working to keep McCain and the woman apart. The story also raised the prospect of a romantic relationship between the married candidate and the much younger lobbyist.

McCain’s counterattack against what he called a “smear campaign,” first launched the night before the story hit print, was soon followed by criticism of the Times in the media world itself, creating a separate and unintended story line. By the end of the week, the political press was wondering whether the Times had accomplished something McCain had been previously unable to do—rally disgruntled conservatives to his side.

Not only did the Times story become a major part of the campaign narrative last week, it supercharged what had been a fairly slow news week for McCain. From Feb. 21 through Feb. 24, the GOP’s presumptive nominee became the week’s leading newsmaker, showing up as a significant or dominant factor in 51% of the stories compared to 43% for Clinton and 41% for Obama in that period. 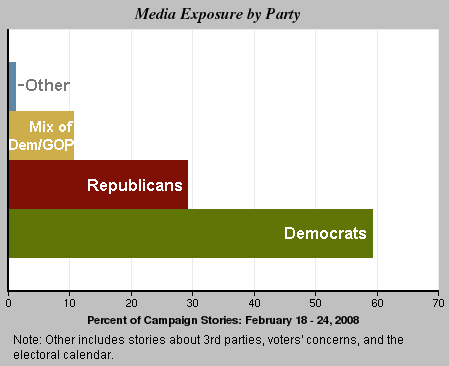 Mike Huckabee, still functioning as something of a vessel for discontent with McCain in the Republican primaries, was overwhelmed by the Times-related tsunami, factoring in a mere 4% of the coverage last week.

Once again, the campaign overwhelmed the news agenda last week. Coverage of the presidential race filled 44% of the newshole, as measured by PEJ’s News Coverage Index. As part of a clearly emerging trend, the battle for the White House once again generated the most attention on cable news (69%) and radio (53%), the two media sectors that are home to the daily talk shows.

And since primary voters began trekking to the polls in January, the campaign’s dominance of the news agenda has been overwhelming. In the six weeks since the CCI debuted, the race has accounted for 45% of all news coverage, distantly followed by the troubled U.S. economy at 8%. To find the third-biggest story in that period, events inside Iraq, you have to drop all the way down to 2% of the newshole.

On the Democratic side, the media narrative for the week began with a Clinton offensive on the eve of the Wisconsin vote. Noting that “Wisconsin is now Hillary Clinton’s next best hope to stop Barack Obama’s momentum,” CBS correspondent Jim Axelrod delivered a Feb. 19 Early Show account of Clinton’s charges that Obama was ducking debates and had plagiarized passages of a speech from Massachusetts Governor Deval Patrick. But when Wisconsin voters delivered for Obama that day, the tone of coverage changed.

The next day’s Boston Globe story on the Wisconsin results had Obama “building an imposing delegate lead and extending a broad reach across Democratic constituencies….such as women, lower-income families and union households—that had been strongholds for Clinton.” That evening, the Fox News Channel’s Bill O’Reilly digested the results and asked the question: “Is Barack Obama unstoppable?” (His answer was an almost certain “yes.”) 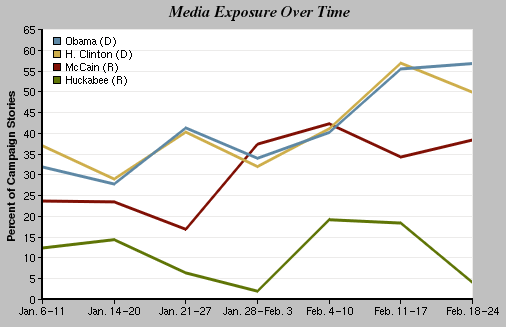 If Clinton had a second opportunity to change the story line last week, it came during the Feb. 21 debate. But the general consensus, at least of the media pundits, was that the largely civil exchange between the two Democrats was not a game changer. “As for Obama, he took a few glancing blows, but hardly enough to change what is looking like the inevitable conclusion of the race,” opined Tucker Carlson on his Feb. 22 MSNBC show.

One wrinkle that emerged from that debate and fed the Obama surge narrative was Clinton’s gracious closing remarks–“I am honored to be here with Barack Obama…Whatever happens, we’re gonna be fine,”– that spurred a big ovation from the debate audience. But in the media post-mortems, many wondered whether that was a rehearsal for a concession speech.

“She seemed almost to surrender to the will of the voters,” observed ABC’s David Wright as Good Morning America replayed those comments the next morning.

John McCain may have thought so, perhaps. Apparently concluding that Obama was the likely nominee, McCain began training his attacks on the Illinois Senator early in the week.

At least until a new foe suddenly arose—the New York Times. That Feb. 21 story, and reaction to it, quickly overwhelmed the GOP narrative. And as that night’s ABC newscast suggested, the Times journalism became as much a part of the story as McCain.

The article “raised as many questions about the paper and what standards of proof it would need to publish such a story as it did about the Senator,” declared anchor Charles Gibson. The Feb. 22 Los Angeles Times reported that the story “set off a furor among readers and journalists” and may well have worked to McCain’s advantage by “unify[ing] conservative commentators around the presumptive Republican presidential nominee…Conservative commentators, including some who had previously chastised McCain for not hewing closely to their principles, leaped to the candidate’s defense.”

The Times story, by raising the issue of McCain’s relationship with the lobbyists, was not without potential peril for a candidate was has positioned himself as a staunch foe of Washington’s entrenched powers. And by the next day, CBS Evening News anchor Katie Couric was asking how his reliance on lobbyists in this campaign “square[s] with McCain’s opposition to special interests.”

Still, the initial sense at least was that the Times story—probably the most controversial piece of campaign journalism to date in this race—seemed to be creating more problems for the paper than for McCain. There was at week’s end, rumblings of enough scrutiny of McCain’s history with lobbying, however, to suggest the larger issue may not be entirely settled.

After the campaign, the three-biggest stories last week involved major global events with potentially significant implications for the U.S. Kosovo’s declaration of independence, which led to rioting and pitted the U.S. versus Russia, was the No. 2 story at 7%. The changing of the guard in Cuba, or at least the transition from Fidel Castro to Raul Castro, was next at 6 % while the Pakistani elections that handed a resounding defeat to President Pervez Musharraf’s party came in at 4%. The troubled U.S. economy rounded out the top five, also at 4%