In a week when Republicans fought two 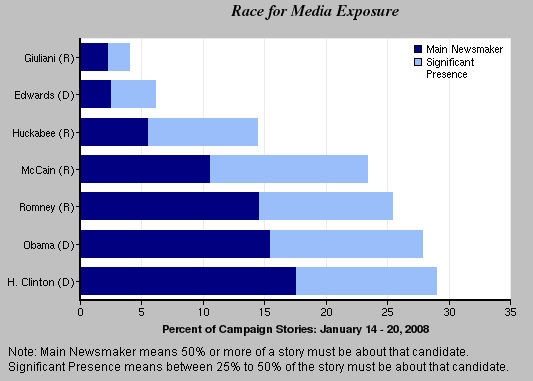 hotly contested primary battles and the Democrats only one, Hillary Clinton and Barack Obama still attracted more coverage than top GOP newsmakers Mitt Romney and John McCain—and Clinton and Obama were in a virtual dead heat.

But Republicans overall generated more press than Democrats last week, a rare occurrence in this campaign season. What tipped the scales? A big difference, once again, was the treatment of Mike Huckabee versus John Edwards. Despite complaints from the Edwards campaign, the media, who apparently consider Huckabee a more viable contender than Edwards, lavished much more attention on the former Republican Governor of Arkansas than on the ex-Democratic Senator from North Carolina.

In his last gasp before dropping out, meanwhile, Fred Thompson barely registered on the media radar, a problem that, to some extent, also faces Rudolph Giuliani as he tries to jump start his candidacy in the vital Jan. 29 Florida contest.

These are some of the findings from Project for Excellence in Journalism’s second edition of the Campaign Coverage Index, a measure of which candidate is winning in the all-important race for media exposure. The project will run the Index until nominees are selected in each party.

Last week, January 14 through 20, the day before the Michigan primary through the day following the Nevada and South Carolina contests, the race for media exposure got even tighter. Clinton was a significant or dominant factor in 29% of the campaign stories examined by the Index, while Obama was featured in 28%. Those are both down from a week earlier.

Still both leading Democrats registered slightly higher than the leading GOP attention getter, Romney, who captured a win in Michigan. He was a significant or primary factor in 25% of stories examined, up from 19% the week before. McCain, with a crucial victory in South Carolina, was at 23%, a similar level to a week earlier (24%).

The fact that Romney generated more coverage than McCain last week—and got considerably more than a week earlier—reflects the volatile nature of the GOP primaries. After his Jan. 8 win in New Hampshire, McCain was the leading Republican newsmaker. When it was Romney’s turn to salvage his candidacy a week later in Michigan, he became the hottest commodity. Winning, it seems, is the best strategy for getting press attention.

Huckabee—who finished a distant third in Michigan and a close second in South Carolina—was a significant factor or main newsmaker in 14% of the stories last week, similar to the number he reached a week earlier (12%).

Edwards, who was not competitive in Nevada, complained about his lack of media coverage last week. He even made an ad about it for the web. But complaining didn’t seem to help. He was a distant sixth among all candidates at only 6%. Republican Giuliani, pinning his hopes on Florida, was a non-factor at 4%. Thompson, who dropped out of the race on Jan. 22 after a disappointing third in South Carolina, was at only 1.5%

The gap in media interest between Huckabee and Edwards helps explain why 44.5% of the campaign stories last week were mostly about Republicans compared to 40% that were largely about the Democrats. Another 11% of the stories offered a mix of candidates from both parties. That is a reversal from the week before, when Clinton’s surprise win in New Hampshire helped Democrats overshadow Republicans in attention (43% vs. 32%).

The Campaign Coverage index, which will appear weekly until nominees are selected in each party, will be an addition to PEJ’s NCI report, which tracks what stories the media covered in the previous week. The new CCI offers a greater level of detail of the campaign coverage. That includes the percentage of stories in which a candidate played a significant role (as a subject of between 25% and 50% of the story) or a main newsmaker role (making up at least 50% of the story). The Index also identifies the key narratives in the reporting and the “Line of the Week,” a statement from a journalist or source that in our researchers’ estimation seems either to capture the story or is particularly colorful. PEJ’s News Coverage Index will not disappear. It will come at the bottom of the CCI.

Once again, thanks to the crowded primary calendar, the Presidential campaign was overwhelmingly the top story, accounting for 39% of the newshole from Jan. 14-20, as measured by PEJ’s News Coverage Index–although that number is down from 49% a week earlier. The campaign consumed the cable news networks, which devoted 65% of the time examined to the race last week. It also accounted for 42% of the airtime on radio, a platform that includes the radio talk hosts.

The virtual tie between Clinton and Obama in the coverage competition may be a function of two candidates who became entangled in increasingly heated and unpleasant exchanges over racial and personal issues, which was a major factor in the coverage last week.

The story line had started the week before with Clinton remarks that were seen by some as diminishing Rev. Martin Luther King’s role in the struggle for civil rights legislation. (A New York Times editorial said that despite Clinton’s efforts to “reframe the quote, the feeling hung in the air that she was denigrating America’s most revered black leader.”)

To fight back, the Clintons enlisted Black Entertainment Television Founder Robert Johnson, whose remarks became chapter two in the media saga. While speaking at a Clinton event in South Carolina, Johnson seemed to refer to Obama’s past drug use.

Last week, Johnson apologized to Obama as the two campaigns struggled to impose what was widely described as a “truce.”

That truce did not appear to take hold in the Jan. 19 Nevada caucuses where, at least in Las Vegas, ill will permeated a battle won by Clinton 51%-45%. A Los Angeles Times account of the event described as part of an “increasingly nasty fight on the Democratic side” with both camps “trading charges of intimidation and voter suppression.”

In the GOP storyline last week, Romney entered Michigan desperately needing a win. His victory over McCain not only revitalized his candidacy, it prompted pundits to wonder if he had finally found his voice with a newfound emphasis on jobs. “The clunky chimera candidate who tried so hard to prove his conservative credentials had become a model of simplicity with one major theme,” declared a Time.com piece posted on Yahoo News.

But with his three-point victory over Huckabee in South Carolina, a state that effectively ended his 2000 campaign, John McCain also fared well in the media narrative last week. If that didn’t quite make the Arizona senator the man to beat in the fluid GOP race, it got him within hailing distance, according to some journalists. “McCain has the opportunity to take control of the Republican race” with a win in the Jan. 29 Florida primary, The Washington Post stated. “A victory there would establish him as the clear front-runner heading toward Super Tuesday…”

Huckabee was largely portrayed as badly, if not quite mortally, wounded by his loss in South Carolina, a state with a large conservative and evangelical population. But nothing is close to being settled on the GOP side, with a Jan. 20 New York Times headline neatly summing things up in three words: “No Quick Knockouts.”

Although the 2008 campaign was easily the top story of the week, its chunk of the newshole did fall 10 points from the previous week (from 49% to 39%). That’s probably because a substantial second story emerged last week—the increasingly troubled U.S. economy, which filled 12% of the newshole. That is three times more than any other story earned a week earlier while competing for space with the campaign coverage. (The economy accounted for 18% in newspapers and 16% in network TV.) At some points during the past year, that 12% would have been enough to constitute the leading story of the week, but during the rush of primary season it is a very distant second. After the economy, there was a major drop off down to the next three stories—President Bush’s trip to the Middle East (2%), the case of murdered Marine Maria Lauterbach (2%) and the impact of the Iraq war on the homefront (also at 2%).