An intriguing piece of speculation is making the rounds in radio – rumors of a possible merger between the two satellite radio services, XM and Sirius. Whether there’s any underlying truth to the speculation may depend on the answer to one big question: Is Sirius serious?

In a keynote speech at the Credit Suisse Media and Telecom Week Conference on Dec. 6, Sirius CEO Mel Karmazin dropped several hints about a potential merger and lauded the economic benefits of such a move for both companies’ shareholders. XM spokespeople have dismissed the talk as mere speculation. But some analysts say that eventually a merger seems logical, if not inevitable.

XM, which has been on the air for about five years, is the older and larger (in terms of subscribers) of the two services. Sirius, however, is growing at a faster pace thanks in part to shock jock Howard Stern’s arrival this year. But it also has bigger losses.

Regardless of the seriousness of Karmazin’s intentions, investors seemed to like the idea, at least temporarily. Though XM and Sirius stock had been dropping steadily throughout 2006, they both saw an uptick after Karmazin’s statements. For Sirius, the rise tapered off quickly. XM, on the other hand, has continued to see its stock price rise.

Any consolidation of the two satellite companies could pose some legal challenges, including a review of possible antitrust violations by the Federal Communications Commission and Justice Department.

Another major factor to consider is the impact on the consumer. Thus far, the two companies—which market themselves by delivering entertainment stars, sports coverage, and a growing list of talk news personalities—have engaged in a heated rivalry that’s been the catalyst for much of the programming and proved to be expensive. The Chicago Tribune reported that Sirius spends more than $100 to acquire a new subscriber, while XM spends about $90.

The chart below—featuring a side-by-side comparison of XM and Sirius—reveals two platforms that, for now, are competing intensely for a consumer that tends to be younger, wealthier and better educated than the traditional terrestrial radio listener. 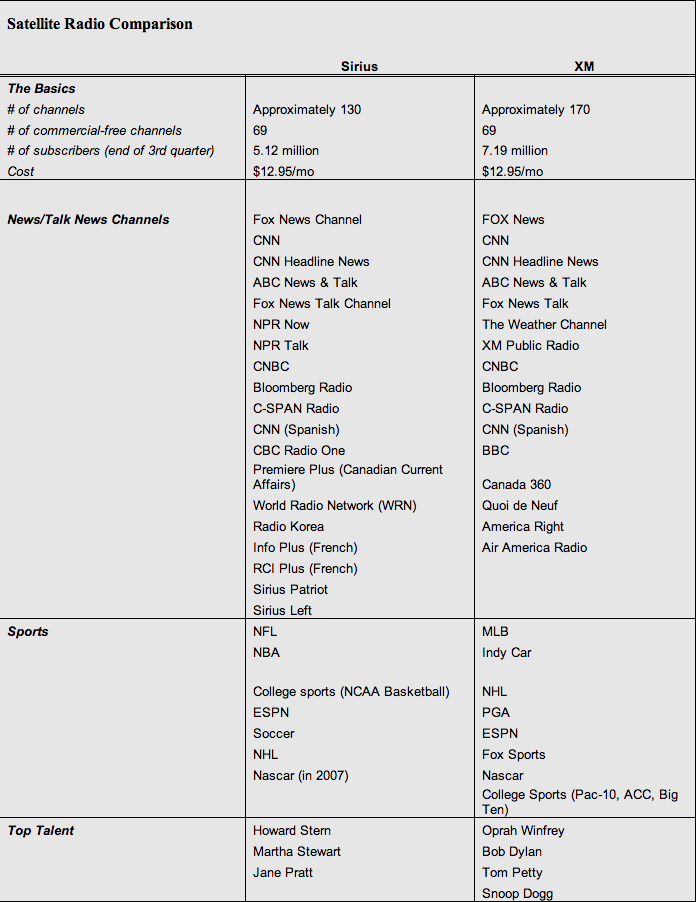