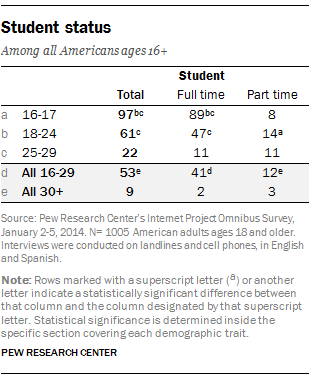 Our surveys have confirmed that the demographic composition of those ages 16-29 is different from older generations. Our major 2013 survey found that younger generations are much more racially and ethnically diverse. They differ in other ways as well, particularly in terms of where they live and their general life stage. And though we cannot explore younger Americans’ household income levels in great detail due to data limitations, our library engagement typology found that Americans’ relationships with public libraries are part of their broader information and social landscapes, as people who have extensive economic, social, technological, and cultural resources are also more likely to use and value libraries as part of those networks. 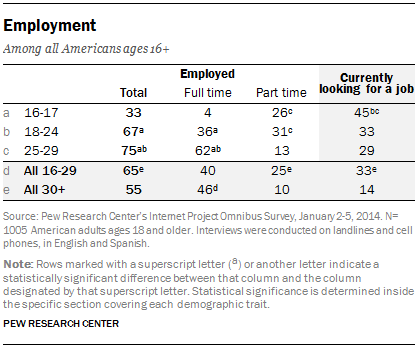 Our library typology also found that life stage and special circumstances are linked to increased library use and higher engagement with information, and the most highly engaged groups in our typology contained higher proportion of parents, students, and job seekers.

We have previously examined parents’ closer relationships with libraries. The 2013 survey also found that students and job seekers are more likely to have used a library in the past year overall. However, these groups (though potentially overlapping) differ in the value they place on various library services. For instance, students’ higher rates of library use are not necessarily paired with higher reported reliance on library services, while job seekers are significantly more likely to place a high value on many of the resources we asked about—starting with job search assistance. Among those who are currently looking for a job, 47% say that getting help finding or applying for a job at the library is “very important” to them and their family. Furthermore, job seekers are more likely to rank as highly important every library service we asked about, with the exception of free access to books and media. 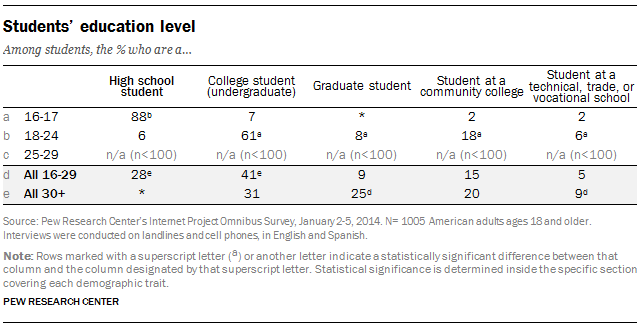 Next: Younger Americans’ Reading Habits and Technology Use
← Prev Page
Page1You are reading page2Page3Page4
Next Page →