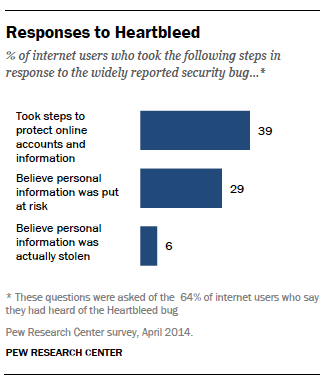 The Heartbleed security flaw on one of the most widely used “secure socket” encryption programs on the internet had an impact on a notable share of internet users, 1 according to a new survey by the Pew Research Center: 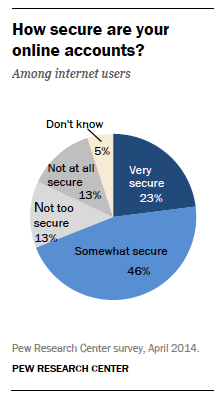 These findings come from a survey of 1,501 American adults (ages 18+) conducted between April 23-27 on landline and cell phones. The survey was administered in English and Spanish. It has a margin of error of plus or minus 2.9 percentage points for the overall sample and 3.1 percentage points for the 1,303 internet users in the sample. The questions about Heartbleed’s impact were asked of the 897 respondents who were internet users and who had heard about the security flaw. The margin of error for those results is plus or minus 3.8 percentage points.

The revelations about the Heartbleed bug in the OpenSSL program were a major story in early April because of the nature of the flaw (it allowed bad actors to discover supposedly secure encrypted information) and the potential size of the affected population. Perhaps 500,000 or more websites use OpenSSL to allow their visitors to have supposedly secure interactions. Such internet behemoths as Facebook, Yahoo, Google, YouTube, and Wikipedia were affected.

Moreover, the flaw went undetected for more than two years. The open-source nature of the OpenSSL program meant that it was available for free to the companies that wanted an easy–and respected—way to allow users of their sites to have encrypted interactions with the sites.

It also meant that unpaid, volunteer coders were the primary designers of the software. Few of the firms actually using the code on their websites provided financial support for its development. Ironically, the open-source nature of OpenSSL meant that few people had financial incentive to look for flaws and fix problems.

There was consensus in the internet security community that the safest user response after announcement of the problem was to first check whether a particular website was employing repaired versions of OpenSSL. Several testing sites were created so that people could stick in a Web address to see if a site still used the problem software. Experts also suggested that people change their passwords or even cancel accounts if they felt the accounts were vulnerable.

Who was aware of Heartbleed

The most noteworthy traits of those who had heard about the security problem on the internet was that they were likely to be relatively well educated and higher income Americans: 77% of those with college educations were aware of Heartbleed, along with 75% of those living in households earning $75,000 or more.

In previous surveys about people’s awareness of news stories, Pew Research has found a number of news events that have gained much more public attention than Heartbleed. For instance:

The Heartbleed story registered roughly the same level of public awareness as the U.S.-Iran negotiations and agreement to allow monitoring of Iran’s nuclear program (in November and December 2013) and Catholic Bishops in the U.S. protesting Obama Administration policies they believe restricted religious liberty (July 2012). 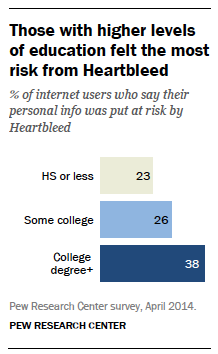 Those who are relatively upscale were more likely to feel their information was put at risk: 38% of online Americans with college or graduate degrees said they thought their information was put at risk, compared with 23% of internet users with a high school diploma or less. Among other reasons, this likely happened because those with higher education were also more likely to have heard a lot about Heartbleed.

Some 6% of internet users said they felt their information had actually been stolen because of Heartbleed. There was no notable variance in this figure when it came to different demographic groups.

Who took precautionary steps in response to Heartbleed

Who feels secure or insecure

Others are less confident. One-in-four internet users (26%) think their online accounts are not secure, including 13% who say that they are “not too secure” and another 13% that think they are “not at all secure.” 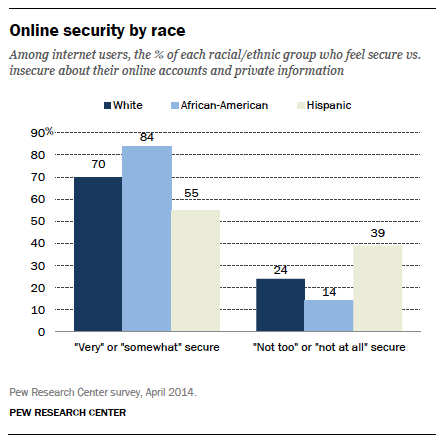 Some 84% of African-American internet users say their online accounts and private information are “very” or “somewhat” secure, the highest percentage of any racial group.

On the opposite end, Hispanics are the most likely to say their online interests are “not too” or “not at all” secure, with 39% saying so.