This report is based on the findings of a survey on Americans’ use of the internet. The results in this report are based on data from telephone interviews conducted by Princeton Survey Research Associates International from Jan. 12 to 25, 2011, among a sample of 2,251 adults, age 18 and older. Telephone interviews were conducted in English and Spanish by landline (1,501) and cellphone (750, including 332 without a landline phone). For results based on the total sample, one can say with 95% confidence that the error attributable to sampling is plus or minus 2.4 percentage points. For results based Internet users (n=1,762), the margin of sampling error is plus or minus 2.7 percentage points. In addition to sampling error, question wording and practical difficulties in conducting telephone surveys may introduce some error or bias into the findings of opinion polls.

A combination of landline and cellphone random digit dial (RDD) samples was used to represent all adults in the continental United States who have access to either a landline or cellphone. Both samples were provided by Survey Sampling International, LLC (SSI) according to PSRAI specifications. Numbers for the landline sample were selected with probabilities in proportion to their share of listed telephone households from active blocks (area code + exchange + two-digit block number) that contained three or more residential directory listings. The cellphone sample was not list-assisted, but was drawn through a systematic sampling from dedicated wireless 100-blocks and shared service 100-blocks with no directory-listed landline numbers.

New sample was released daily and was kept in the field for at least five days. The sample was released in replicates, which are representative subsamples of the larger population. This ensures that complete call procedures were followed for the entire sample. At least seven attempts were made to complete an interview at a sampled telephone number. The calls were staggered over times of day and days of the week to maximize the chances of making contact with a potential respondent. Each number received at least one daytime call in an attempt to find someone available. For the landline sample, interviewers asked to speak with the youngest adult male or female currently at home based on a random rotation. If no male/female was available, interviewers asked to speak with the youngest adult of the other gender. For the cellphone sample, interviews were conducted with the person who answered the phone. Interviewers verified that the person was an adult and in a safe place before administering the survey. Cellphone sample respondents were offered a post-paid cash incentive for their participation. All interviews completed on any given day were considered to be the final sample for that day.

Weighting is generally used in survey analysis to compensate for sample designs and patterns of nonresponse that might bias results. A two-stage weighting procedure was used to weight this dual-frame sample. The first-stage weight is the product of two adjustments made to the data – a Probability of Selection Adjustment (PSA) and a Phone Use Adjustment (PUA). The PSA corrects for the fact that respondents in the landline sample have different probabilities of being sampled depending on how many adults live in the household. The PUA corrects for the overlapping landline and cellular sample frames.

The second stage of weighting balances sample demographics to population parameters. The sample is balanced by form to match national population parameters for sex, age, education, race, Hispanic origin, region (U.S. Census definitions), population density and telephone usage. The white, non-Hispanic subgroup is also balanced on age, education and region. The basic weighting parameters came from a special analysis of the Census Bureau’s 2010 Annual Social and Economic Supplement (ASEC) that included all households in the continental United States. The population density parameter was derived from Census 2000 data. The cellphone usage parameter came from an analysis of the January-June 2010 National Health Interview Survey.1 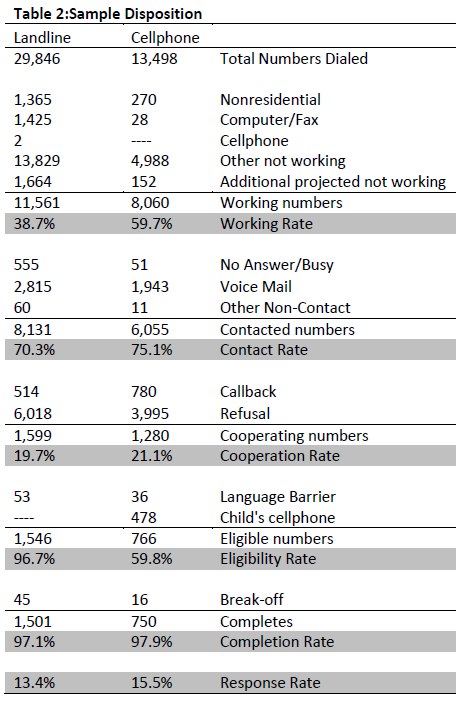