Many devices have become popular across generations, with a majority now owning cell phones, laptops and desktop computers. Younger adults are leading the way in increased mobility, preferring laptops to desktops and using their cell phones for a variety of functions, including internet, email, music, games, and video.

Additionally, about one in 11 (9%) adults do not own any of the devices we asked about, including 43% of adults age 75 and older.

In terms of generations, Millennials are by far the most likely group not only to own most of the devices we asked about, but also to take advantage of a wider range of functions. For instance, while cell phones have become ubiquitous in American households, most cell phone owners only use two of the main non-voice functions on their phones: taking pictures and text messaging. Among Millennials, meanwhile, a majority use their phones also for going online, sending email, playing games, listening to music, and recording videos.

However, Gen X is also very similar to Millennials in ownership of certain devices, such as game consoles. Members of Gen X are also more likely than Millennials to own a desktop computer.

e-Book readers and tablet computers so far have not seen significant differences in ownership between generations, although members of the oldest generation (adults age 75 and older) are less likely than younger generations to own these devices. 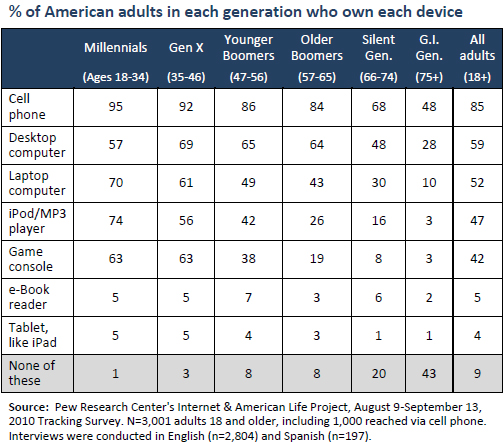 These findings are based on a survey of 3,001 American adults (ages 18 and older) conducted between August 9 and September 13, 2010. The margin of error is +/- 3 percentage points. Interviews were conducted in English and Spanish, and the survey included 1,000 cell phone interviews. (More information is availabe in the Methodology section.) 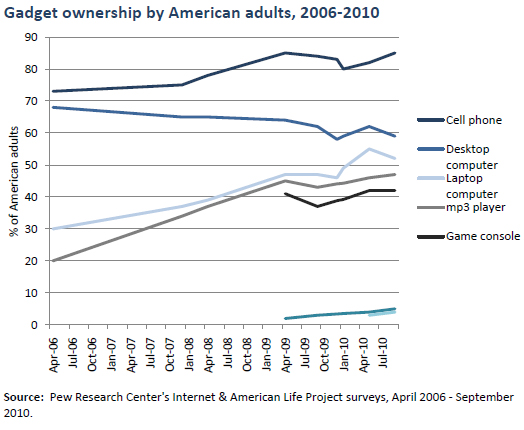 In this chart, the dips in tech ownership registered in the September 2010 survey are mostly a result of the fact that Spanish interviews were added to the survey. Most of the Pew Internet surveys before 2010 were only conducted in English. The Project has added Spanish to this survey and that knocked down the overall tech-ownership numbers in some instances because respondents who wanted to be interviewed in Spanish were somewhat less likely than others to be tech non-users. 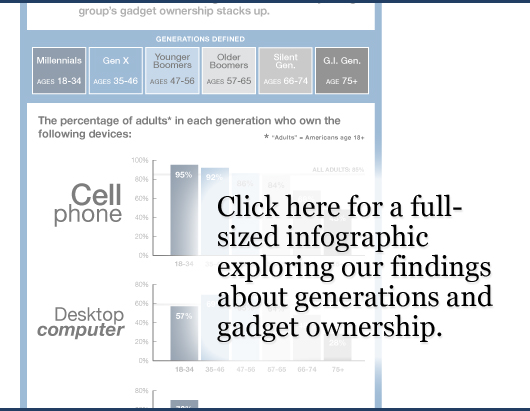 This is part of a series of reports by the Pew Research Center’s Internet & American Life Project exploring how different generations use technology (previous reports: 2010, 2009, 2006). All the generation labels used in these reports, with the exceptions of “Younger Boomers” and “Older Boomers,” are the names conventionalized by William Strauss and Neil Howe in their book, Generations: The History of America’s Future, 1584 to 2069 (Perennial, 1992). The Pew Internet Project’s “Generations” reports make the distinction between Younger Boomers and Older Boomers because enough research has been done to suggest that the two decades of Baby Boomers are different enough to merit being divided into distinct generational groups.

The Pew Research Center recently published a series of reports that more closely examined the values, attitudes and experiences of the Millennial generation.1 These reports are available in full at pewresearch.org/millennials. Many of these reports also compare this younger generation to older cohorts.

The primary adult data in this report come from a Pew Internet Project survey conducted from August 9-September 13, 2010, with some data from a survey conducted April 29 to May 30, 2010. For more information about these surveys, please see the Methodology section at the end of this report.

Eighty-five percent of Americans age 18 and older own a cell phone, making it by far the most popular device among adults. Mobile phones are especially popular with adults under the age of 66, although the largest drop-off is for adults in the oldest generation (those age 75 and older), of whom 48% own a cell phone. 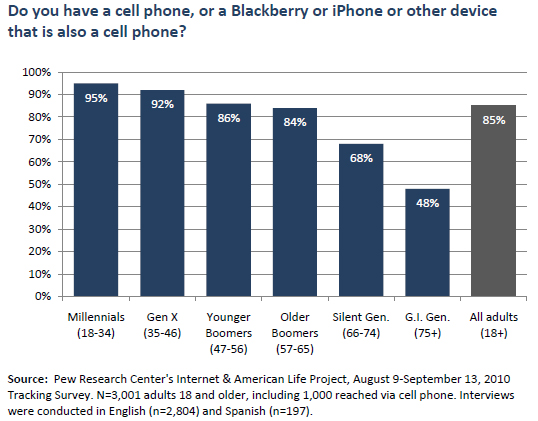 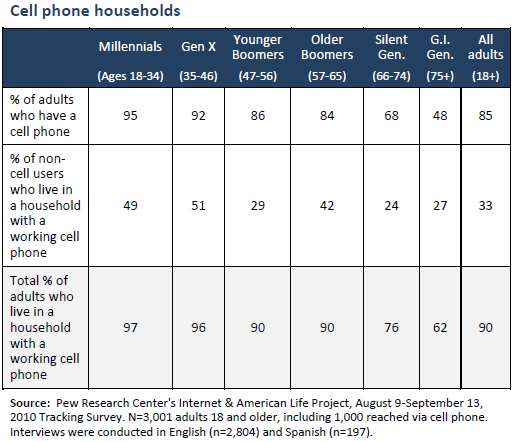 As the proportion of households with at least one working cell phone rises, many are doing without a landline phone connection at all. In the first half of 2010, roughly one in four (25%) American adults lived in households that were “wireless only” in that they had at least one cell phone, but no landline. This includes more than half (51%) of young adults ages 25-29.2 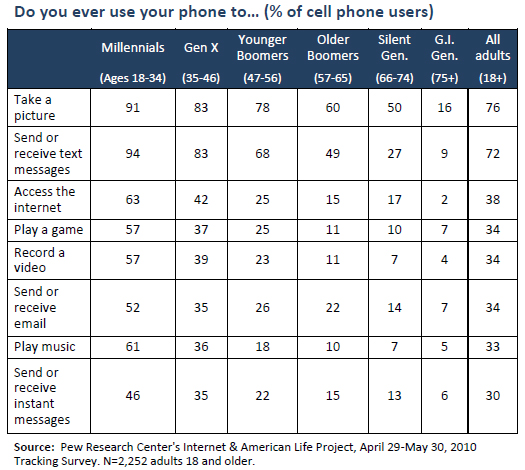 Though cell phones are now ubiquitous in American homes, the level of engagement with the phones does vary widely between generations. As shown in the above table, our May 2010 survey found that while roughly the same proportion of adults in the Millennial generation and Generation X own cell phones, Millennials are significantly more likely to use their phones for a variety of purposes. A majority of Millennials use their phones for taking photos, texting, going online, sending email, playing games, listening to music, and recording videos—making them significantly more likely than any other generation to engage in all of these activities.

In fact, the only two activities that are widely popular for all cell phone owners are taking pictures and sending text messages. Taking pictures is the most popular function on Americans’ phones, with more than half of all cell phone owners under the age of 75 using their phones for this purpose (only 16% of adults age 75 and older take photos with their phones). Text messaging, though also widely adopted, is less popular with adults over age 56.

As noted in previous reports, desktop computer ownership has fallen slightly since 2006, as laptops have gained in popularity.3 Currently 59% of all adults own a desktop computer, and 52% own a laptop (76% own a computer overall). 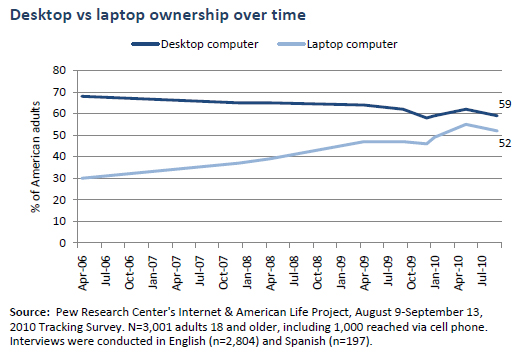 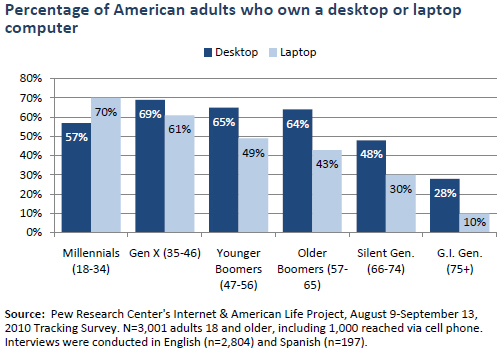 Only 45% of adults over age 65 have a computer of any kind (40% of adults in that age group use the internet), and they are increasingly likely to use a desktop: 28% of adults age 75 and older use a desktop, and 10% use a laptop.4

Almost half—47%—of adults own an iPod or other mp3 player. However, among the devices examined in this report, mp3 players saw the widest range in ownership rates between generations. While 74% of Millennials own an mp3 player, only 56% of members of Gen X do—and adoption rates continue to drop for each of the older generations. Only 3% of adults age 75 and older own this type of device. 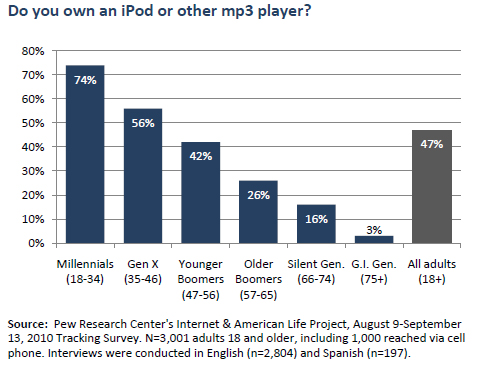 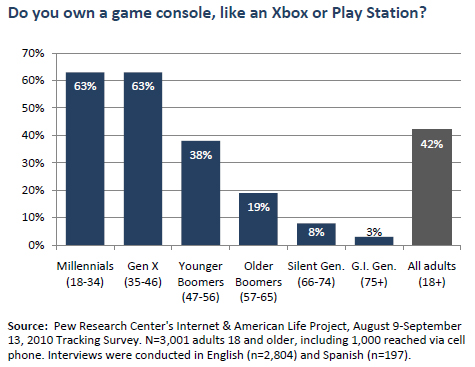 Additionally, as previously reported in “Americans and Their Gadgets,” parents with children living at home are nearly twice as likely as non-parents to own a game console—64% of parents own one, vs 33% of non-parents.5

As of September 2010, 5% of American adults own an electronic book reader such as a Kindle or Sony Digital Book, up from 2% of adults the first time the question was asked in April 2009. 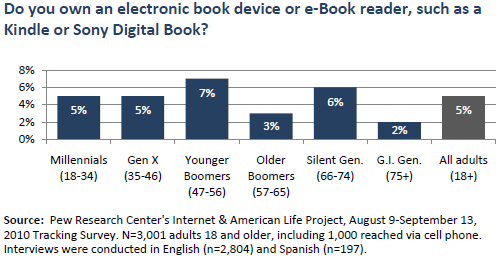 Statistically, there is very little variation between the different generations, although the G.I. Generation is slightly less likely than younger generations to own such a device. Though age is not a strong predictor of e-book use, our previous “Gadgets” report noted that ownership is more likely among college graduates and those with relatively high household incomes.6 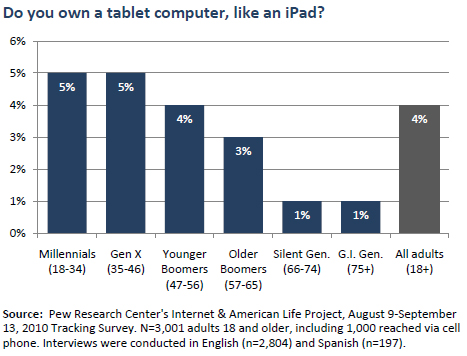 Though there have been several incarnations of tablet-like computers over the years,7 they had not gained widespread attention until Apple introduced the iPad in early 2010.8

In a previous May 2010 survey, when 3% of all adults said they owned a tablet computer, roughly six in ten of tablet owners said they use their device to access the internet. However, given the small number of tablet owners these findings are not reported in detail here.9