The latest findings of the Pew Research Center’s Internet & American Life Project mark a departure from the stagnation in home high-speed adoption rates that had prevailed from December, 2007 through December, 2008. During that period, Project surveys found that home broadband penetration remained in a narrow range between 54% and 57%.

The greatest growth in broadband adoption in the past year has taken place among population subgroups which have below average usage rates. Among them:

Overall, respondents reporting that they live in homes with annual household incomes below $30,000 experienced a 34% growth in home broadband adoption from 2008 to 2009.

Population subgroups that have above average usage rates saw more modest increases during this time period.

Notably, African Americans experienced their second consecutive year of broadband adoption growth that was below average.

Broadband adoption appears to have been largely immune to the effects of the current economic recession. In the April survey, more than twice as many respondents said they had cut back or cancelled a cell phone plan or cable TV service than said the same about their internet service.

Given that the Project’s April 2009 survey shows that 85% of adults have cell phone service, up from 77% at the end of 2007 (in a sample that also included respondents interviewed on cell phones), it seems likely that cell phone users were economizing on service plans rather than foregoing service altogether.

Prices for home broadband service increased from 2008 to 2009. Home high-speed users who reported more choices of providers paid less than others.

A growing share of broadband subscribers is paying for premium service that gives them faster speeds. They are also paying more for the extra speed than they did a year ago.

A majority of home broadband users see a home high-speed connection as “very important” to at least one dimension of their lives and community, such as communicating with health care providers and government officials, or gathering and sharing information about the community.

When asked why they do not have the internet or broadband at home, non-users (either dialup subscribers or non-internet users) cite factors related to the internet’s relevance, availability, usability, and price. A third of dial-up users cite price as a barrier, with the remaining two-thirds citing other factors.

Only 7% of Americans are dial-up internet users at home, a figure that is half the level it had been  two years ago. Here’s what they say when asked what it would take for them to switch to a broadband connection at home.

Non-internet users, 21% of adults, are three times the size of dial-up users and cite a wider range of reasons as to why they don’t have internet access:

Consolidating the reasons mentioned across the two classes of non-broadband users into four categories yields the following table. It shows that half of non-internet or dial-up users cite a reason that suggests they question the relevance of connecting to the internet – either at all or with high-speed at home. 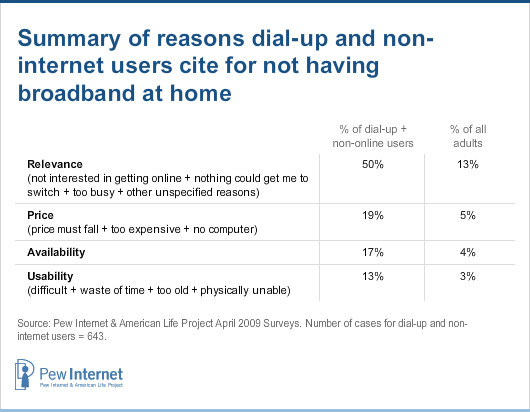 Next: Trends in Broadband Adoption
← Prev Page
You are reading page1Page2Page3Page4Page5Page6
Next Page →