The State of Romance in America

Most young singles in America do not describe themselves as actively looking for romantic partners. Even those who are seeking relationships are not dating frequently. About half (49%) had been on no more than one date in the previous three months.

These findings emerge from a national survey conducted last fall by the Pew Internet & American Life Project looking at the place of online dating in the larger picture of relationships in America. The survey found that dating in America is, indeed, affected by online matchmaking activity. But in analyzing our findings, we discovered another story: Large numbers of single Americans are not actively looking for relationships and even significant numbers of those looking for partners are not that active on the dating scene.

At first glance, the survey results suggest ample targets for Cupid among American adults. The table below shows that while the majority of American adults (56% or 113 million people) are not in the dating market (they are married or living as married), the number of potential romance-seekers is still huge. Fully 43% of adults (87 million people) say they are single. These data generally align with findings from a 50,000-household survey conducted by the U.S. Census Bureau in 2004.1

In general, marriage patterns have ebbed and flowed over time. Census data show fairly consistent patterns throughout the first half of the 20th century with a swing towards marriage in the 1950s and 1960s. Marriage rates then receded as the ranks of both the widowed and the never-married increased. 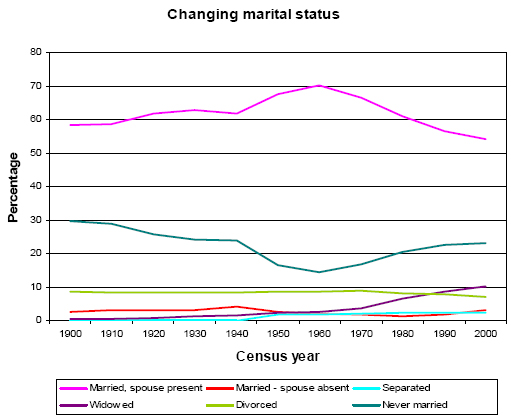 Only 16% of single Americans say they are hunting for a partner. That group represents 7% of the entire adult population.

While a sizable segment of the population is single, about a quarter of unmarried Americans (26% or about 23 million adults) say they are in committed romantic relationships. Single men are more likely than single women to report being so situated. Yet among the uncommitted, relatively few say they are in the market for relationships.

Most relationship-seeking singles say it is difficult to meet people in their towns.

No doubt many reasons underlie the relatively small size of the active dating population. One suggested by this survey’s findings is the type of community in which singles live.

When singles who are actively looking for partners were asked about the dating scene where they live, a majority of those actively seeking dates (55%) said it was difficult to meet people. Only 43% said it was easy, while 2% said they didn’t know.

Perhaps not surprisingly, finding suitable partners is easier in urban areas than in suburban areas, and far easier than in rural areas. As shown in the table, 57% of city dwellers who are looking for dates say there is plenty of dating potential in their communities compared with 38% of date-seeking suburbanites and only 21% of date seekers residing in rural settings. By the same token, substantially more urbanites who are looking for dates (58%) find it easy to meet people in their communities than do suburbanites and rural residents.

Whatever the reasons, few of today’s seeking singles describe themselves as active on the dating scene. Asked how many dates they had been on in the past three months, singles who said they were in the dating market reported the following:

The subpopulation of dating singles in our survey sample is too small to produce highly reliable demographic breakdowns on this dating question. But in our modest sample, urban residents were more likely to be active daters than were suburbanites or rural residents. Perhaps more surprisingly, single men said they had been less active daters than single women.

A look at who’s committed.

Despite the challenges of finding a mate, a majority of American adults have found marriage partners or long-term relationships. And two-thirds (68%) of those in marriages or in households living as married said they had been in those relationships for longer than five years. Overall:

Some key demographic dimensions of each group are shown in the table below: 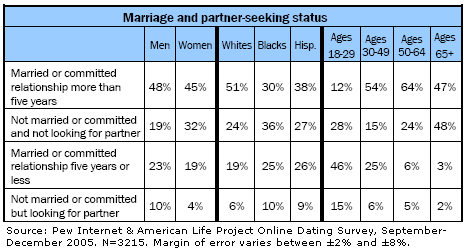 In general, those with college degrees and higher levels of household income are significantly more likely to be married than those with high school diplomas and those living in households with more modest levels of income. African-Americans and English-speaking Hispanics are more likely than whites never to have married.

Among internet users, how the married and the committed met each other.

While the survey provides no direct evidence that the internet can take credit for the higher rates of wedlock among its users, it does show that internet date-seeking has become increasingly popular. UPDATE: A detailed look at online dating is now available at: https://www.pewresearch.org/internet/Reports/2006/Online-Dating.aspx

Note: Further table developed by Mary Madden in response to queries about this data.