Search engine use shoots up in the past year and edges towards email as the primary internet application; On an average day, nearly 60 million people use search engines

Search engines have become an increasingly important part of the online experience of American internet users. The most recent findings from Pew Internet & American Life tracking surveys and consumer behavior trends from the comScore Media Metrix consumer panel show that about 60 million American adults are using search engines on a typical day.

This means that the use of search engines is edging up on email as a primary internet activity on any given day. The Pew Internet Project data show that on a typical day, email use is still the top internet activity. On any given day, about 52% of American internet users are sending and receiving email, up from 45% in June of 2004.

comScore data show that, compared to the amount of time people use search engines, the time users’ spend sending and receiving email on web-based clients such as Hotmail and Yahoo! Mail is still considerably higher. On an average day, internet users on the comScore panel spent more than 24 minutes on email, compared to 3.5 minutes for search engines. This is not surprising, given the average time of a search compared with the average time of reading and writing email. At the same time, it does show that email continues to be a powerful application that commands a notable amount of users’ time online on any given day. 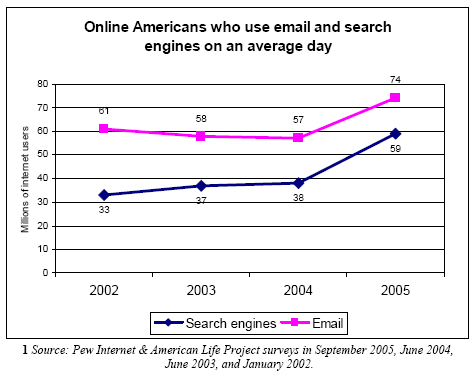 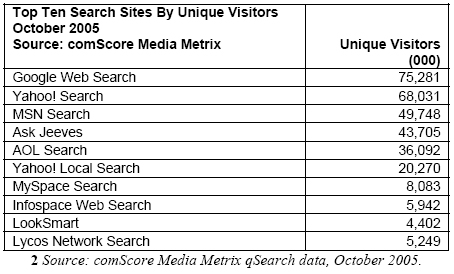 One of the trends comScore data have captured in recent months is the rise of local searches – that is, searches related to geographically distinct places. These searches involve “local qualifiers” – or search terms including specific items such as ZIP codes, telephone numbers and street addresses.  Consumers are using local search tools to coincide with other online activity, such as job searches, retail shopping and travel planning.

Another way to look at location-specific search is to examine searches at Internet Yellow Pages (IYP) sites. IYP sites enable searchers to add additional qualifiers to their searches, such as location information or type of business, thereby enabling the IYP sites to return very specific results. 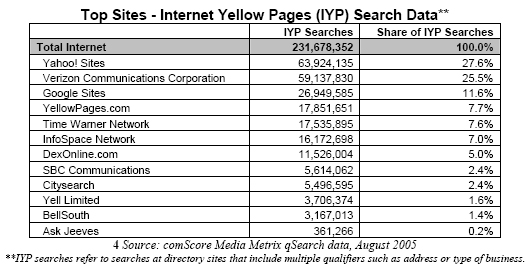 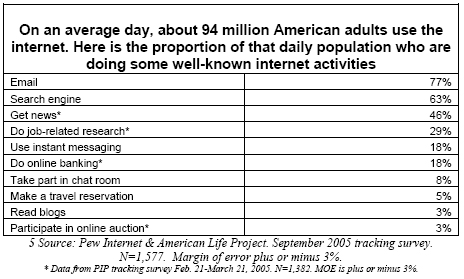 The Pew Internet Project findings cited in this report come from a nationally representative telephone survey of 2,251 American adults (age 18 and older), including 1,577 internet users, between September 13-October 14, 2005. The margin of error on the internet user portion of the survey is plus or minus 3%.

The comScore data cited in this report come from comScore Media Metrix, an internet audience measurement service that uses a massive cross-section of more than 1.5 million U.S. consumers who have given comScore explicit permission to confidentially capture their browsing and transaction behavior, including online and offline purchasing.

Those who use search engines on an average day tend to be heavy internet users. They are much more likely to have broadband connections than dial-up connections; to log on to the internet several times a day; and to have spent considerable time online during the day.

Those using search engines on a typical day are also more likely to be in their 30s – members of the GenX cohort – than any other generational cohort.

Here are some of the details:

On a typical day these are the percentages of internet users in each generation who use search engines:

Big jump in search engine use
Search engine use shoots up in the past year and edges towards email as the primary internet application; On an average day, nearly 60 million people use search engines
Questions and Methodology