How searchers feel about issues related to paid and unpaid search results.

In the last few years, a few new ingredients have been introduced into the ways search engines select and present their search results to users. These have become a source of controversy within the search industry, despite going largely unnoticed by users.

In 2001, Consumer Alert, a consumer watchdog, filed a complaint with the FTC suggesting search engines were changing the nature of their results pages. According to the complaint, instead of presenting results based solely on objective algorithms, the search engines were including results found by paid inclusion and paid placement. Consumer Alert requested that “the Federal Trade Commission (FTC) investigate whether these companies are violating federal prohibitions against deceptive acts or practices (1) by inserting advertisements in search engine results without clear and conspicuous disclosure that the ads are ads. This concealment may mislead search engine users to believe that search results are based on relevancy alone, not marketing ploys.”36

The FTC responded, not by ruling that the practices were in violation of the FTC Act, but rather in declaring that disclosures about practices should be clearer.  FTC officials wrote that “we are sending letters to search engine companies outlining the need for clear and conspicuous disclosures of paid placement, and in some instances paid inclusion.”  And they made their intentions clear, writing “As a general matter, clear and conspicuous disclosures would put consumers in a better position to determine the importance of these practices in their choice of search engines to use.”37 The FTC also issued a consumer alert to educate consumers on the practices of paid inclusion and paid placement and what to look for to recognize them38 They followed through with letters to search engines, including some guidelines on how to achieve “clear and conspicuous disclosure”.39

Despite all this, and despite the explosion of paid placement sales as a source of revenue for search engines, users remain largely unaware of these issues—even though they still hold strong views of what they consider to be ethical practices by search engines. As the following data illustrate, many users would object to the practices of search engines they rely on, if they understood more clearly how those engines actually operate.

Still, some 38% of those who have used a search engine are aware that there are two different kinds of search results, some that are paid or sponsored and some that are not.  The remaining 62% are not aware of this practice. Data from this survey show identical numbers from those collected two and a half years earlier; that is, there has been no overall change in users’ understanding of how search systems work.

Can users distinguish between paid and unpaid results?

Among the 38% of internet users who are aware of the practice, some 47% of searchers say they can always tell which results are paid or sponsored and which are not. This represents about one in six of all internet searchers. An almost equal number, 45%, say they are not always able to tell.

Consumer Reports WebWatch recently completed six months of testing of the top 15 search engines by professional librarians. The research organization found that “most major search engines are making some effort to comply with the FTC’s recommendations (to clearly reveal the presence of advertising within search results), but compliance varied widely.”42 WebWatch found, “All sites tested could improve the visibility and/or clarity of their disclosures. Most troubling, some search engines seem to do as little as possible to explain their relationship with advertisers — and as a much as possible to obfuscate both their use and disclosure of paid placement and paid inclusion.”

And of the testers’ experience, WebWatch wrote, ”Despite the expertise of the testers, nearly all of them experiences some difficulties with certain search engines, whether identifying headings or hyperlinks; differentiating between content promotion, paid placement and paid inclusion; or making sense of disclosure statements.”

One in six internet searchers can consistently distinguish between paid and unpaid search results.

The FTC did not issue specific instruction about what search engines should do to ensure that users could recognize and identify search results involved with payments. Users in our survey offered the most effective ways they thought search engines could distinguish paid v. unpaid results:

The WebWatch findings include some observations pertinent to findings from this survey. WebWatch found labels existed, but seeing them was a problem. The WebWatch findings were: “Eight of the 15 search engines tested labeled their paid search listing with headings that were both smaller and duller in color than the search results themselves. The use of inconspicuous fonts and colors increases the likelihood consumers many not notice disclosures and fail to grasp the true nature of their results.”

They did find that when sites did mark their paid v. unpaid results by color, background color, sections, marking off sections, testers commented positively about clarity.

Further, WebWatch found that text of disclosure statements was largely difficult to recognize, access, and understand: “With only 3 exceptions, (Yahoo, AOL, Lycos) all search engines tested used tiny and faint fonts, such as light gray, for hyperlinks to disclosure pages. Some of these hyperlinks blended in so well with the page that some testers miss them completely. Engines’ pervasive user of eye-straining hyperlinks, which almost seemed designed to be overlooked, greatly reduces the chances consumers will ever see their disclosures.” And they went on to describe that disclosures were sometimes buried so many clicks deep that they were “unnecessarily difficult and frustrating for testers to find.”

Furthermore, testers found many disclosure statements were anything but simple and straightforward, and “almost seemed written to discourage reading.”

Older users are less sure about disclosures.

Searchers of different ages have different opinions of what factors they consider effective for helping users distinguish between paid and unpaid results.  For starters, everyone agrees that labeling paid results with the words “PAID” or “SPONSORED” is the most effective strategy. Beyond that, the oldest users, those over 65 years, stand out. They seem less comfortable with common  web design strategies of listing paid results in a different size font or color or listing the paid results in a different section of the results page, which they considered the least two effective strategies for distinguishing paid results. These strategies were the second and third most popular way that all other age groups deemed most effective. The second largest number of seniors, 20%, just didn’t know or refused to answer, followed closely by the large group of those, 18%, who wanted text explanations about  paid results. These are factors that all other age groups of searchers deemed least effective. It is important to note, though, that there is a higher than usual number of users who answered don’t know/refused to answer. It seems likely that given the lack of awareness about paid vs. unpaid results, many users are unsure in general. 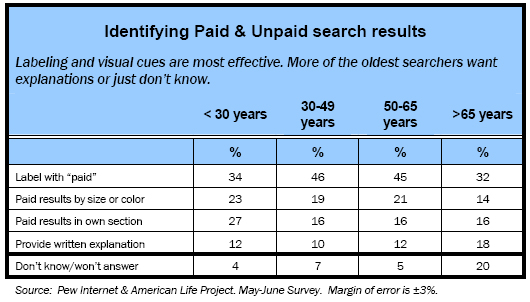 How users see the ethics of the practice.

In large numbers, internet users approve in principle of the idea that search engines might preferentially list some results for pay. About 70% of people who have used search engines say they approve of engines providing some results for pay, because the revenue means search is free to users. Another 21% said they disapprove of the practice even if it means searchers were charged for the service.

In the earlier Consumer WebWatch survey, some 80% say search engines should tell them about fee deals, including 44% who say this practice is “very important”.43

But users were very divided in how they would respond to search engine disclosure practices. Some 45% of searchers said they would stop using a search engine if they didn’t make it clear that some results were paid or sponsored. Some 49% said in the same case, they would continue using the search engine.

Similarly, in the earlier Consumer WebWatch findings,  if an engine revealed it was taking fees for placement, 56% said it wouldn’t affect their user of the engine, although almost 1/3 said they would be “less likely to use” such a search engine .

Internet users are wary about their privacy and the prospect that search engines might track searchers’ moves.

A second controversial issue in search, tracking users’ online search behavior, has remained fairly minor so far, largely because, as Danny Sullivan reports in SearchEngineWatch, the search industry has been holding back in venturing into what it recognizes as very sensitive privacy realms.44

A few years ago, an idea by Yahoo to serve up ads to members’ email accounts relating to things they had searched for at Yahoo, was aborted before it took off. At Google’s Gmail, a similar idea that would search thru emails and serve up ads based on content of emails, did take off. An earlier pioneering venture by Google, its toolbar, illustrates the sensitivity toward privacy as reflected in language describing the optional download of the toolbar and what it means to privacy and to tracking search by the user. Google writes:

If the search industry moves toward personalization — which is very likely at some point — necessitating finding out more about the searcher, the issues will become more complicated.

It is clear from findings here that the search engines are right to value users’ general concerns over issues of privacy, transparency, trust. It is very clear once again that users primarily want their engines to be upfront and honest and transparent about what it going on.

Some 43% of searchers in our survey say they are aware of the issues of tracking users on search engines, while 57% are not. Some 37% of searchers would approve of such practices in general, while 55% would disapprove. Of those who disapprove, 51% say they would change their minds and approve of search engine tracking if the engines made their tracking practices clear to users. Some 44% would still disapprove. Of that 44% who remain disapproving (which now translates into almost a third of all internet users) two thirds of them, 67% would stop using the search engine if they learned the engine was keeping track of their own searches. That translates into about 21% of all internet users who would stop using a particular search engine if they learned their searches were being tracked.

Next: Part 6. Some demographic differences: gender and age
← Prev Page
Page1Page2Page3Page4Page5You are reading page6Page7Page8Page9
Next Page →

Search Engine Users Part 1. Introduction Part 2. What people seek with search engines Part 3. Who we are as searchers: confident and satisfied Part 4. The searcher and his search engine
Part 5. Is users’ trust in search engines blind?
Do users notice?Can users distinguish between paid and unpaid results?Older users are less sure about disclosures.How users see the ethics of the practice.How searchers feel about issues related to paid and unpaid search results.Internet users are wary about their privacy and the prospect that search engines might track searchers’ moves.
Part 6. Some demographic differences: gender and age Part 7. Conclusions Methodology