54 million Americans have used the internet to take virtual tours

Since the dawn of the Web in the early 1990s, internet advocates have argued that one of the Web’s most powerful applications would be to open up new worlds to people and help them easily experience faraway places.

A new survey by the Pew Internet & American Life Project finds that 45% of online American adults have taken advantage of this internet application and taken virtual tours of another location online. That represents 54 million adults who have used the internet to venture somewhere else.

On a typical day, more than two million people are using the internet to take a virtual tour.

Some of the most popular virtual tour destinations include museums, tourist and vacation locales, colleges and prep schools, real estate, historical exhibits, parks and nature preserves, public places such as the White House and the Taj Mahal, and hotels and motels. 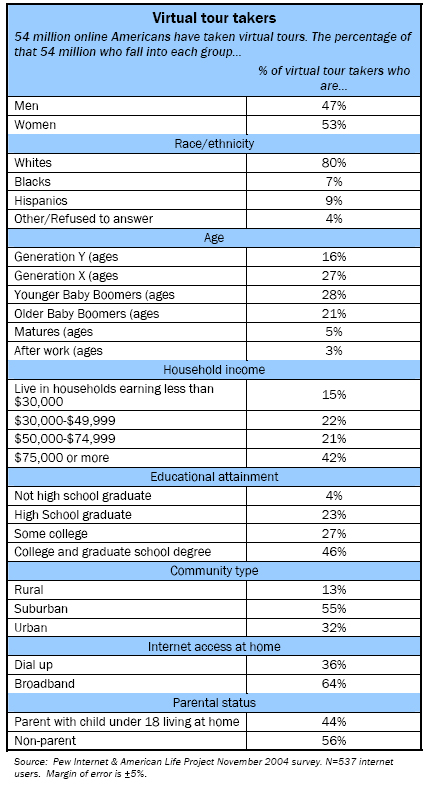 The nationwide phone survey cited here involved interviews with 914 adults, 534 of whom are internet users. The margin of error is plus or minus four percentage points.

Virtual tours
Virtual Tours
Use of the Internet in places other than home or work
The Commons of the Tragedy: How the Internet was used by millions after the terror attacks
Internet Users In Search of a Home
Defining generations: Where Millennials end and Generation Z begins
Are you in the American middle class? Find out with our income calculator
25% in U.S. see at least some truth in conspiracy theory that COVID-19 was planned
Key things to know about election polling in the United States
Public’s Mood Turns Grim; Trump Trails Biden on Most Personal Traits, Major Issues