A few demographic groups display distinctive behaviors or attitudes toward spam: women hate pornography; parents resent the risks spam presents to their children; younger users have a casual response to spam; veterans of many years’ Internet experience are particularly aggressive toward spam. What follows is a look at these different demographic realities.

Women are more bothered than men by spam.

More women than men expressed concern about every bothersome trait of spam we probed in our survey, but a few stood out. Significantly more women than men are bothered by offensive or obscene content of spam (83% v. 68%); by the deceptions and dishonesties in spam (82% v. 77%); by the sense that spam could mean their privacy has been compromised (79% v. 73%); and that spam could damage their computers (81% v. 76%). 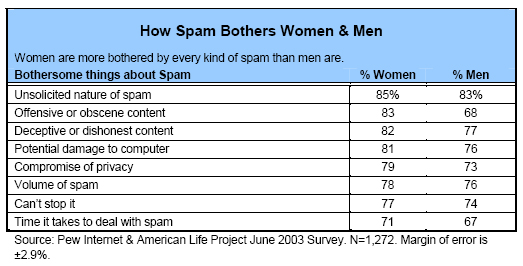 Although men and women receive about the same volume of email, the same proportions of spam in those emails, and spend about the same amount of time processing the spam, more women than men say the spam gets in their way; women are considerably more likely to report that they get so much spam, it often makes it hard to get their real mail, both for work email (41% v. 28%) and for personal email (60% v. 51%).

Women find that spam interferes more with their ability to use email.

One woman wrote in the TRAC survey:

Men are also more aggressive in acting on spam they receive, both positively and negatively. While women are more likely than men to delete their spam immediately (88% v. 83%), significantly more men than women have clicked on a link inside spam to get more information (37% v. 29%), and have ordered a product or service (9% v 5%). More men than women have requested to be removed from mailing lists (71% v 63%).

Young and old share concerns about spam, but more young people than older people show tolerance of spam; 32% of those ages 18 – 29 years say spam is “just part of life on the Internet and is not that big of a deal,” compared to 18% of those 30 years old or more. Some 63% of younger Internet users say, “Spam is a real problem on the Internet and more should be done to control it,” compared 73% of older users.

Consistent with this, young people are more likely to have a more conservative definition of spam; they consider more of their impersonal email to be legitimate email, not spam. 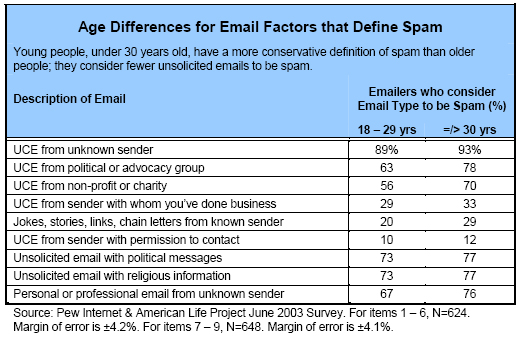 More young people are actively interested in the content of spam; significantly more have clicked on a link inside spam to get more information (41% v. 31%). And while young people are no more or less likely than older Internet users to go so far as to order products or services offered by spam, they are more likely to become victims of fraud. A whopping 20% of those under 30 years report that they have responded to an email offer, only to find out later that it was phony or fraudulent, compared to 9% of others.

The biggest concern for young people about spam is the risk that it will do damage to their computers. Some 21% of young people point to this as the trait about spam that bothers them most, compared to 13% of older users. Young people are also significantly more concerned than older people about spam’s spillover effects on email’s reliability, specifically; that they might lose some of their legitimate email. Significantly more young people are concerned that they might mistakenly misidentify and delete an important email (39% of those under 30 report this, compared to 25% of those 30 and above), that filtering software might block important emails from reaching them (39% v. 27%) or block their emails from reaching others (33% v. 20%).

Parents are very anxious about their children being exposed to inappropriate content through spam.

Parents of children under age 18 who live at home are more likely to object to the adult content in spam than non-parents. Some 81% of parents cite such objections, compared to 72% of non-parents. They have good reason to worry: A recent study by Symantec, an Internet security software company, reports that 80% of children who use email receive inappropriate spam daily. Half of those surveyed say they feel uncomfortable or offended by inappropriate emails. Almost half the kids receiving spam say they have received emails including links to pornographic sites. Some 22% say they have never talked to their parents about spam.11

Parents’ stories are graphic and even desperate. One parent reported in the TRAC survey:

With more Internet years under their belts, Internet users grow increasingly intolerant of any kind of email that resembles spam. We asked about the content of various types of unsolicited email messages, from pornography to offers for health and medical content to political and religious messages. In every measure the longer Internet users had been online, the more likely they were to consider every kind of unsolicited message to be spam.

Similarly, Internet users seem to lose patience with spam over time. The longer they have been online, the more likely they are to simply dismiss spam rather than consider its content. Some 91% of 6-year veterans immediately delete their spam, compared to 81% of others. Further, the 6-year online veterans are more likely to ask to be removed from mailing lists than the rest (73% v.63%), report it to their email providers (24% v. 18%), and even report it to consumer or government agencies (10% v. 4%).

Next: Part 7. When Spam Is a Big Problem
← Prev Page
Page1Page2Page3Page4Page5Page6You are reading page7Page8Page9Page10
Next Page →

Spam: How it is hurting email and degrading life on the Internet Part 1. Introduction Part 2. What Is Spam Anyway? Part 3. The Volume and Burdens of Spam Part 4. How Emailers Interact with Spam Part 5. How Email Users Feel About Spam
Part 6. Notable Responses to Spam
Women, parents, young Internet users, and longtime Internet users have particular responses to spam.Women are more bothered than men by spam.Young people are more tolerant of spam than older Internet users and less strict in defining spam.Parents are very anxious about their children being exposed to inappropriate content through spam.Veteran Internet users are more sophisticated about spam.
Part 7. When Spam Is a Big Problem Part 8. The Implications of These Findings Methodology