How African-Americans use the Internet 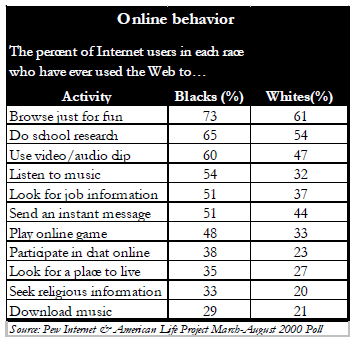 The Internet helps, especially on health and hobbies

Email: Great for families, almost as great for friends

Online African-Americans appreciate their ability to stay in touch with family and many say it helps them stay in better contact with friends. However, they are less likely than whites to use email to sustain friendships.

Online African-Americans who have at least two years experience are more likely than newcomers to go online on a typical day and more likely to spend three or more hours online during that typical day. Veteran Internet users are also more likely than novices to use email, get news, research and buy products, look for job information, seek material on places to live, do banking online, and conduct job-related research. Veterans are more likely than newcomers to report that Internet tools have helped them manage their finances better, improved their connection with family members and friends, and helped them learn new things.