The Latino community is diverse and that diversity is reflected in different levels of electoral participation. While voter participation for Latinos overall declined between 2008 and 2012, that wasn’t true for all sub-groups of Latinos. 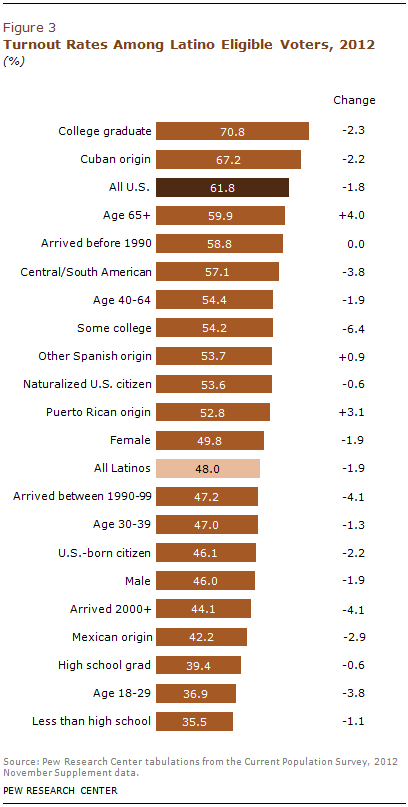 Latinos who have a college degree and those who trace their family origins to Cuba had the highest voter turnout rates among Latino demographic sub-groups in 2012. Seven-in-ten (70.8%) Latinos with a college degree and 67.2% of Latinos of Cuban origin turned out to vote last year—both substantially higher than the 48% turnout rate among all Latinos. By contrast, some of the lowest voter turnout rates among Latino demographic subgroups were among those with less than a high school diploma (35.3%), young Latinos ages 18 to 29 (36.9%) and those who graduated from high school (39.4%). 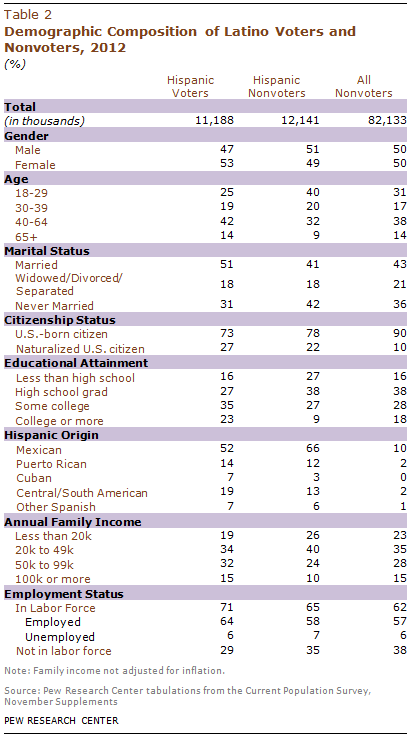 Hispanic non-voters in 2012 differed in many ways compared with Hispanics who voted.

Overall, Hispanic nonvoters were more likely to be male, young (ages 18 to 29), never married, have a high school education or less, to be of Mexican origin, have annual family incomes of less than $50,000 a year and not be in the labor force compared with Hispanic voters. However, two large differences are evident between Latino nonvoters and Latino voters.

The first is the relative youth of Latino nonvoters. Among them, 40% were under the age of 30. By contrast, among all Latino voters, only 25% were ages 18 to 29.

Next: References
← Prev Page
Page1You are reading page2Page3Page4
Next Page →